When they had crossed, Elijah said to Elisha, “Tell me, what can I do for you before I am taken from you?” “Let me inherit a double portion of your spirit,” Elisha replied.  “You have asked a difficult thing,” Elijah said, “yet if you see me when I am taken from you, it will be yours – otherwise not.” “As they were walking along and talking together, suddenly a chariot of fire and horses of fire appeared and separated the two of them, and Elijah went up to heaven in a whirlwind.  – 2 Kings 2:9-11, New International Version 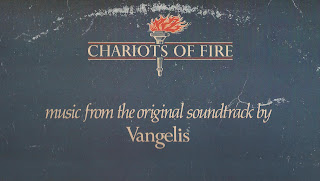 I think Jim left something behind when he moved to Florida…
HIS HARD COVER ADDICTION!!!


While I don’t think I received a “double portion” and I certainly can’t split water with my coat, I’ve been going nuts about hard covers recently.  Jim wises up and sheds some of his collection, while I’m acquiring new things almost as fast as I can gobble through a container of dark chocolate covered almonds (Oh, my poor stomach!).

I’ve always had a fondness for not just comics, but books – spending many mall hours perusing  through the paperback pages of the Science Fiction and Fantasy (or occasionally Mystery) section (Waldens – R.I.P).  So, putting comics and hard covers together is like a match made in heaven   Even so, I don’t have that many and I find it incredibly difficult to abstain from an impulse “floppy” purchase on any given week (Although Scarlet Spider is very, very good), in favor of saving for a generally much more rewarding collected edition.

My HC passion in recent years has been the Marvel Omnibus or Omniboos as they’re sometimes called.  And I’ve even dabbled in DC’s exceptional Archives series, obtaining complete runs of Green Lantern and the Flash (and I’m very happy that there will be new volumes for each line later this year).  Eventually, I plan to take some time to comment on the pros and cons of each and the rationale of why I get them , but this week I wanted to focus on the classic revisited (or is that remastered) – The Marvel Masterworks (MMW) series. 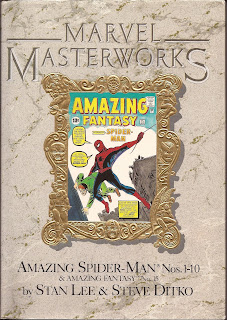 I got the very first Marvel Masterworks near the very beginning back in the late 80’s:  Volume 1 reprinting Amazing Spider-Man #1-10 (and Amazing Fantasy #15).  I think they’ve just solicited Volume 184 or something like that.  I mainly followed Spidey (up through issue 40) with a scattering of the first few volumes of Captain America, Daredevil, Fantastic Four, and Thor.  My objective was primarily to fill in some gaps in my back issue collection.  Most of these editions have gone on to another home, since I’ve replaced them with Omniboos. 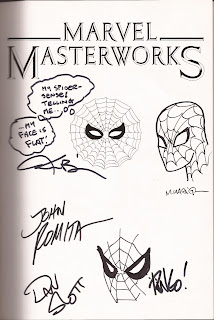 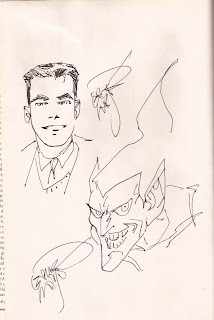 I still have my first one though and I’ve turned it into something special by having various creators sign and/or sketch in it.  In recent years, I’ve been gradually selling off my higher end Silver Age Marvels after getting the story in hard cover form.  If we had then what we have now; I probably never would have bought those old books between 1988 and 1990.
I’ve made a good return on my investment (thanks to Ted Levine of Superworld Comics) and annually use my proceeds to fund the latest collections or original art purchases.  Still, I’ve pretty much shied away from MMW, since an Omnibus is like getting three Masterworks for the price of two.  However, I made an exception a couple of years ago and purchased Avengers Volume 6 (the beginning of the Roy Thomas/John Buscema run).  The main reason was so I could sell my copy of Avengers #57, if needed and it only cost $25. 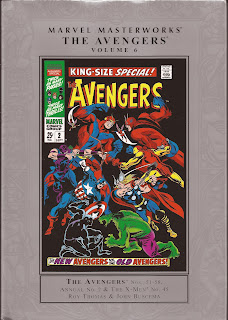 For any hard cover the retail price is only there so you can feel you’re getting a deal on whatever discount your vender is offering.  You can typically get 30 to 40% off and if you’re very lucky, you’ll get 50% off or more.  For me, saving 50% on a MMW is highly tempting.  Now, I’m usually patient for the next Omnibus, but sometimes you know it’s going to be a long wait before a new one is issued.  So, I also ended up with Avengers Volume 7, 8, and 9.  I really like the black covers more than the multi-color lifesaver format.  They mimic the elegant design of the Archives (Man, it’s impossible to just talk about one type of HC at a time…).  Did I read them?  No, I didn’t.   As Jim attested to the other week, buying and reading your HCs don’t necessarily go together.

I picked up Marvel Team-Up Volume 1 from my local shop for $20 over a year ago and I only JUST read it within the last month or so.  But that really renewed my enthusiasm and I started going on an ebay shopping spree.  For one, it got me interested in reading some of the old Spidey stories again, so while searching for the 10th volume of Avengers, I ended up getting the 13th volume of Amazing Spider-Man and the first volume of Iron Fist.  However, that wasn’t enough; I also won the 2nd volume of the Inhumans, which “forced” me to get the first volume, the aforementioned Avengers book AND Deathlock.  I’d probably be getting more, but I’m tapped out right now and need to be ready for two upcoming Omniboos.


For collectors, just getting the next edition and putting it on the shelf is satisfying.  And you are usually excited about reading it right away, but if you don’t do it quickly enough you’ll lose the urge fast.  Luckily, my desire to read my HCs is overshadowing my weekly comics right now and I’ve already finished Inhumans Vol 1, tackled a fourth of the second volume, and read the first issue in ASM Vol 13.

So, here’s my current plan for getting more.  I want to continue to get the Avengers MMW series while I wait for the Omnibus editions (Volume 1 came out last week!)  Iron Fist should have one more edition (and it’ll be phenomenal – all Byrne and Claremont).  Volume 13 of ASM starts with the Death of Gwen Stacy – one of the best comic stories EVER!  (I still tear up when I read it.)  And the beginning of one of my favorite Spider-Man runs, the excellent Ross Andru years.  I love Ditko and Romita, but Andru was the Spidey artist when I started buying comics and his work just captures that nostalgic feeling.  So, I want to continue getting those up through issue #180 at least.  There are others I’m interested in, especially ones that won’t ever be upgraded to Omnibus massiveness (like Warlock and Captain Marvel) – it’ll just have to be the right price.

I haven’t even mentioned the exceptional quality of the books.  The care in the reproduction, the interesting text pieces from the creators who wrote or drew the stories, the extras of original art, etc.  There’s a great website devoted to all HCs and Masterworks in particular.  Jim used to have a link to it on the blog, but it’s been off for a while, so here it is again.


Does that mean all the stories are really classics? Unfortunately, no.  But there are gems in every volume (even the Bronze Age ones).  I mean the end of Marvel Team-Up with the Kang/Tomorrow Man Time War was really, really tough to get through (especially the way Spidey got across the world so quickly), but the scenes with Peter and Harry, the early issues with the Human Torch are very enjoyable and part of the overall continuity of the time.  Some of those remarks will have to wait for another time.  I’ve got a long weekend ahead of me and I want to take time to read these babies, not just write about them.
Posted by Matthew at Saturday, September 13, 2014

Email ThisBlogThis!Share to TwitterShare to FacebookShare to Pinterest
Labels: reading my HCs