A Tribute to Trimpe

I came up with that statement some time ago to illustrate the truism that the collective relational experience between readers, whether through a blog, podcast, e-mail, or simply chatting at your Local Comic Shop (LCS) is as much a part of the hobby as reading the comic itself and collecting it to be appreciated another day. This idea especially applies when there is a bond between a fan and a comic book creator. That bond is initially established when you first fall in love with an individual’s work and start to follow them as one of your favorites.  Regardless of whether you’re a child or an adult, a connection of some sort is made between you, because every creator puts a bit of themselves into their craft.

And if you ever get to meet that person one day (and they’re not a jerk), it just enriches the whole experience even more.  Better still is if you develop a person to person relationship with them, rather than just a fan to creator one.  Best of all is if you are blessed to become friends. Now certainly the term “friends”, like “love”, has many layers and degrees, so please do not presume that I am embellishing on any of the friendships I claim to have with any comic book professionals.  I’m just happy for the ones I have no matter the degree.  That’s why when one of them ends abruptly…

You see, my friend, the legendary artist of Marvel’s The Incredible Hulk, Godzilla, and G.I.Joe to name a few, Herb Trimpe, passed away unexpectedly two weeks ago on 2015 April 14.  I just found out yesterday while perusing the www.marvelmasterworks.com website and saw their bulletin about IDW's upcoming Herb Trimpe's Incredible Hulk Artist Edition HC. I'm still reeling from the news. It's been much more on my mind than the protests in Baltimore City that sent me home from work this morning.

I wanted to pay tribute to Herb by recounting my friendship with him, which began in 2007, consisted of only subsequent annual in-person meetings at the Baltimore Comic-Con, and a few e-mails in-between.


Just like Lee Weeks and Fred Hembeck were this past year, Herb was tops on my list of creators to meet for his inaugural appearance at the show that year.  In 2005 I got books signed.  In 2006 I tried to get free sketches.  In 2007, I got my first commission (after selling some high-grade silver age books [19 FF’s for $1,100] to Ted VanLiew of Superworld Comics).

It was my 30th anniversary of collecting comics and I can still remember the thrill in the spring of 1977 of finding Godzilla #1 on the spinner rack at the Colonial Heights 7-11 after just reading the house ad in another book.  That cover is so iconic to me.  I loved Herb’s Godzilla, but I also loved his Hulk (with issue #179 being one of my all-time favorites).  So, I wanted to combine the two for the price of one – so to speak.  I asked Herb to have Godzilla fight the shadow monster from Incredible Hulk #184 in a similar pose as that issues cover.  Since the figure drawing required a shadow anyway, why not have it be another character – two for the price of one – or so I thought.  Well, in typical Herb fashion he was swamped at the show and was finishing up my drawing at lightning speed late on Sunday.  He had in mind a more complete homage to the cover including scenery, which of course would mean a higher cost. I think it was still only $125 total, which was such a great deal for something that is now immeasurably priceless to me.  I got to watch him draw quite a bit of it, which gave us a chance to chat.  He could draw and talk at the same time, which is unbelievable to me.  I guess I was pretty endearing and memorable to him and his wife, Patricia, since I usually had a gaggle of kids in tow with me (at least 4 of the 5 that year – now 6). 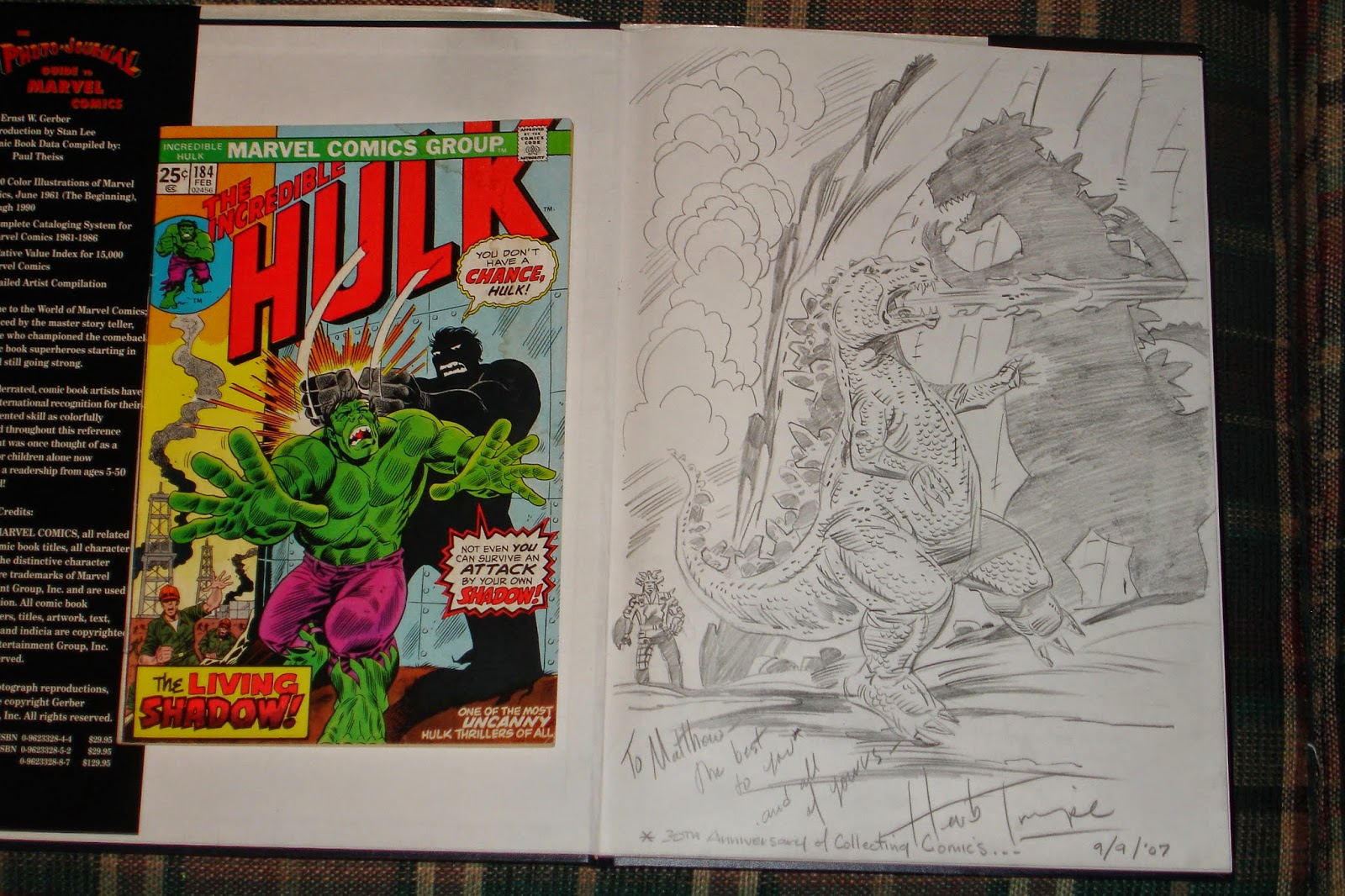 Alas, I couldn’t find my pictures from 2007 (cursed digital photography and poor back-up organizational skills – I think we’ve lost years of photos), but we all looked pretty similar when I got my second commission from Herb in 2008.  This one was to be in homage to the cover of Incredible Hulk #130, where I would be drawn in the place of Bruce Banner.  I had intended to be dressed in my comic-con uniform (black HULK movie t-shirt and jeans), but I wasn’t around when he finished it up, so he kept me in tatters and turned my face away.  It hadn’t come out the way I had expected. Oh well, lightning doesn’t always strike twice.  But I still enjoyed visiting with him.

In 2009 I was only there for day one and probably only stopped to chat briefly.  My son Eric and I were driving to Pittsburgh for the live recording of ApologetiX’s The Boys Aren’t Backin Down CD on Sunday.  Recently, Eric drove me to Pittsburgh to see ApologetiX play the house band for a Steeler’s event.

In 2010, I asked Herb to ink the Hulk drawing and redraw my face using a photo reference (he only charged $50).  He took it home with him and sent it to me about a month later.  He often would suggest to people to contact him in advance or allow him to finish the commission after the show, so he wouldn’t be rushed.  It came out great as you can see below.  I hung it up yesterday (I have to rotate my original art) in memory of Herb.  Boy, am I glad I asked him to draw it! 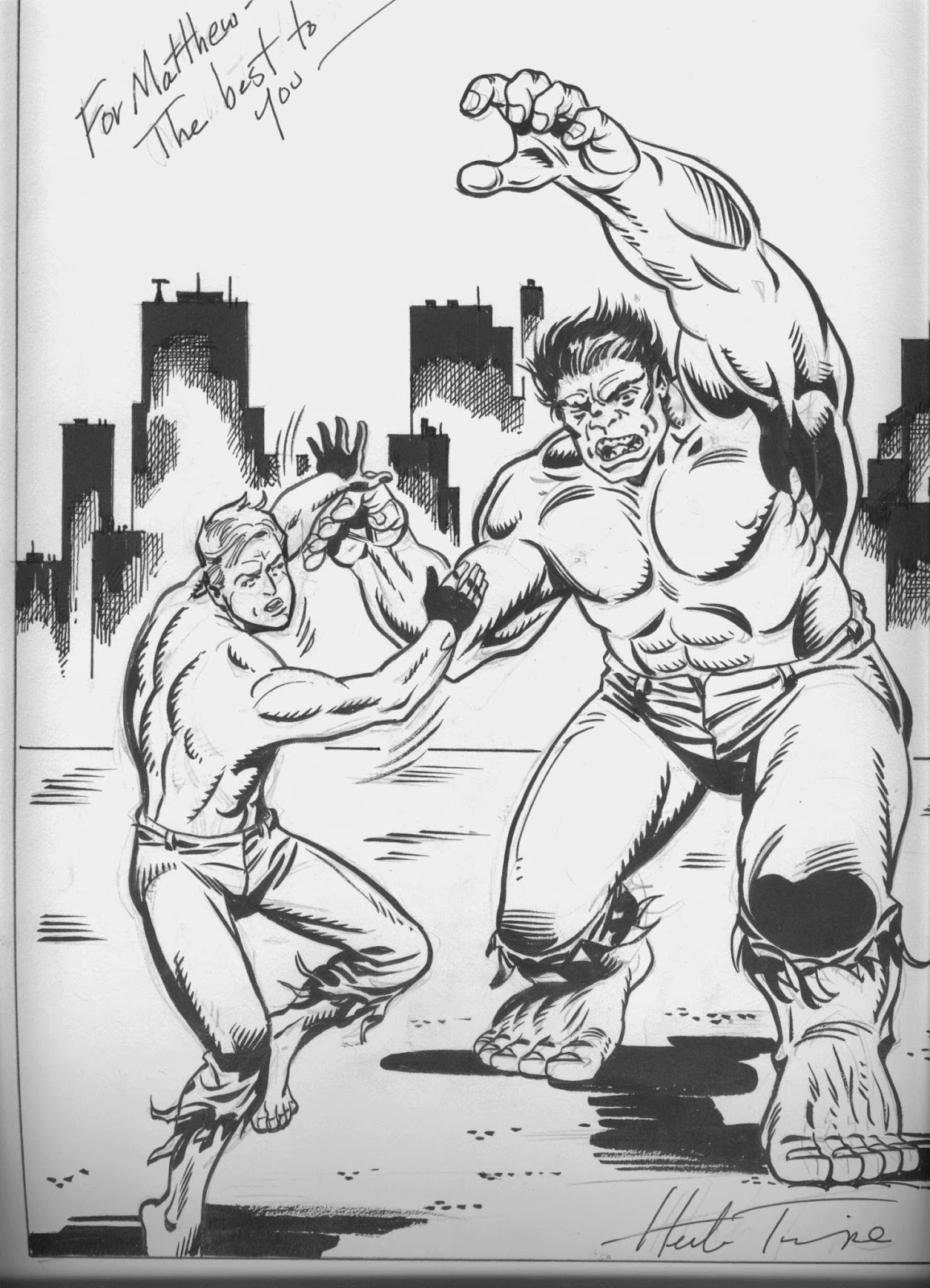 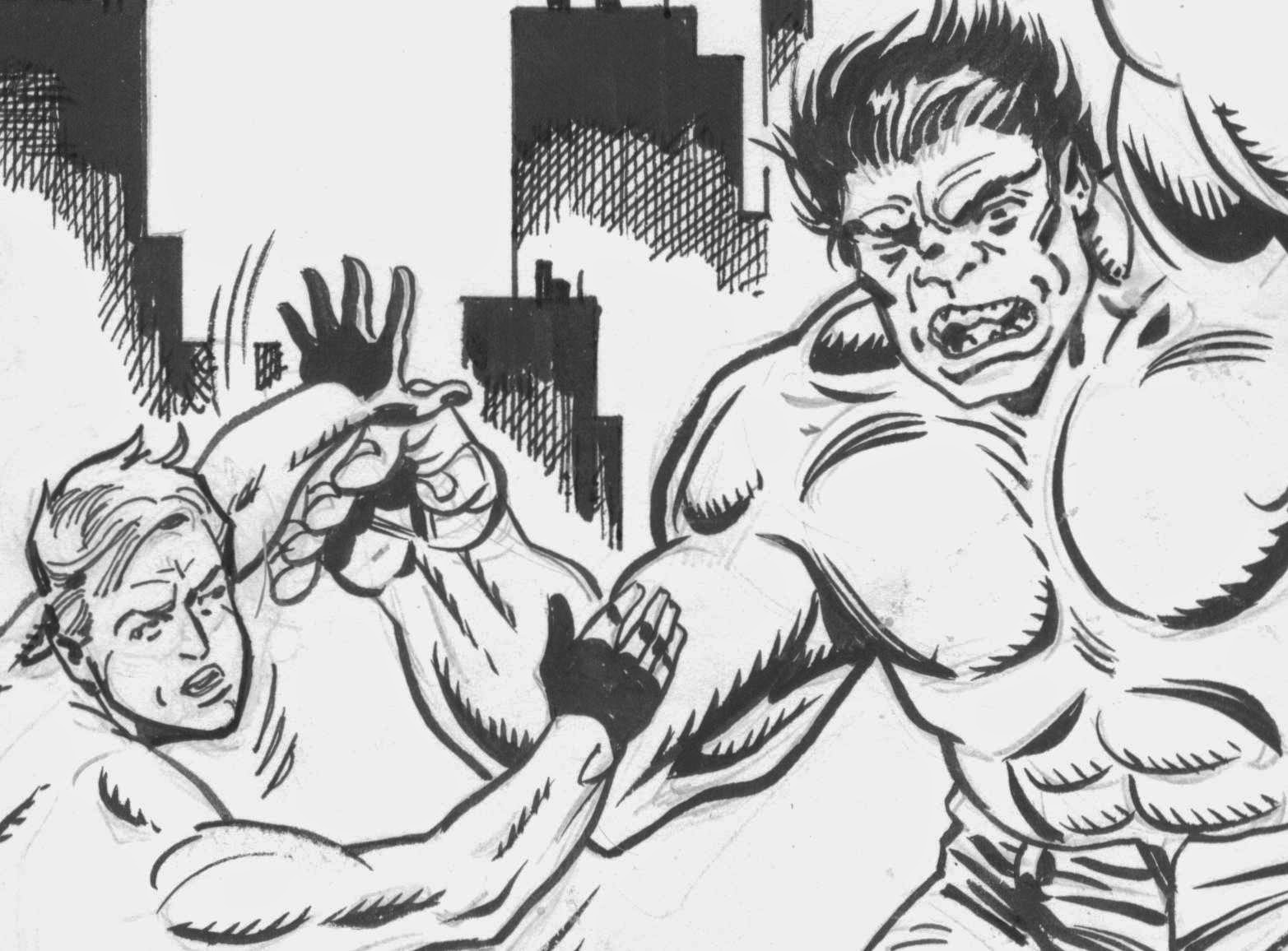 I never requested a commission again from Herb, but in the back of my mind I always wanted him to do a montage of “TEK” images with different characters all pushing the dreaded button with the “TEK” sound effect.  He used that scene in a lot of his stories.  However, I still made sure I visited with him and Patricia each time.  It got harder and harder to find a good amount of time though, since he grew more popular every year. He was always friendly with everyone, even when you could tell he was stressed.

Some people may hate me in a line at a show, because I like to visit for so long (I talked with Lee Weeks for 2 hours during Day 1 last year) as I usually knell down to be at eye level with them.  However, I’m content to be interrupted – I know paying commissions and free signings are more important to keep people from being ticked off – for me it’s worth the wait since relationships with people are the most important thing.  So if you ever see a guy kneeling and chatting at a creator’s table, just politely tap my shoulder and I’ll happily give way for your brief visit, so I can continue my extended one later.

In 2012 I gave Herb the Hasbro Hulk vs Wolverine two-pack that you can see up above.  He thought I wanted him to sign it, but I said it was a gift for him.  He was very appreciative and I gathered that he fully intended to open it up when he got home.  Having purchased the splash page of Godzilla #8 for $1,100 from Anthony’s Comic Book Art earlier that year, I took a video of Herb talking about the page, which you can see here:

In 2013 I came in around lunch time on Sunday and brought some pizza for Herb and his wife.  They loved it (as they rarely had time to take a break during the show).  That was also the year that I was showing Eric’s “comic” around for constructive criticism.  You can see the first part of that video with Herb here (I had to provide youtube links because they are so large).  I’m not much of a videographer, but as an archivist, it is a real treasure to not only remember Herb or read about him, but to see him and hear him again.  I hope you enjoy it despite the quality.  Herb was very encouraging to my son. 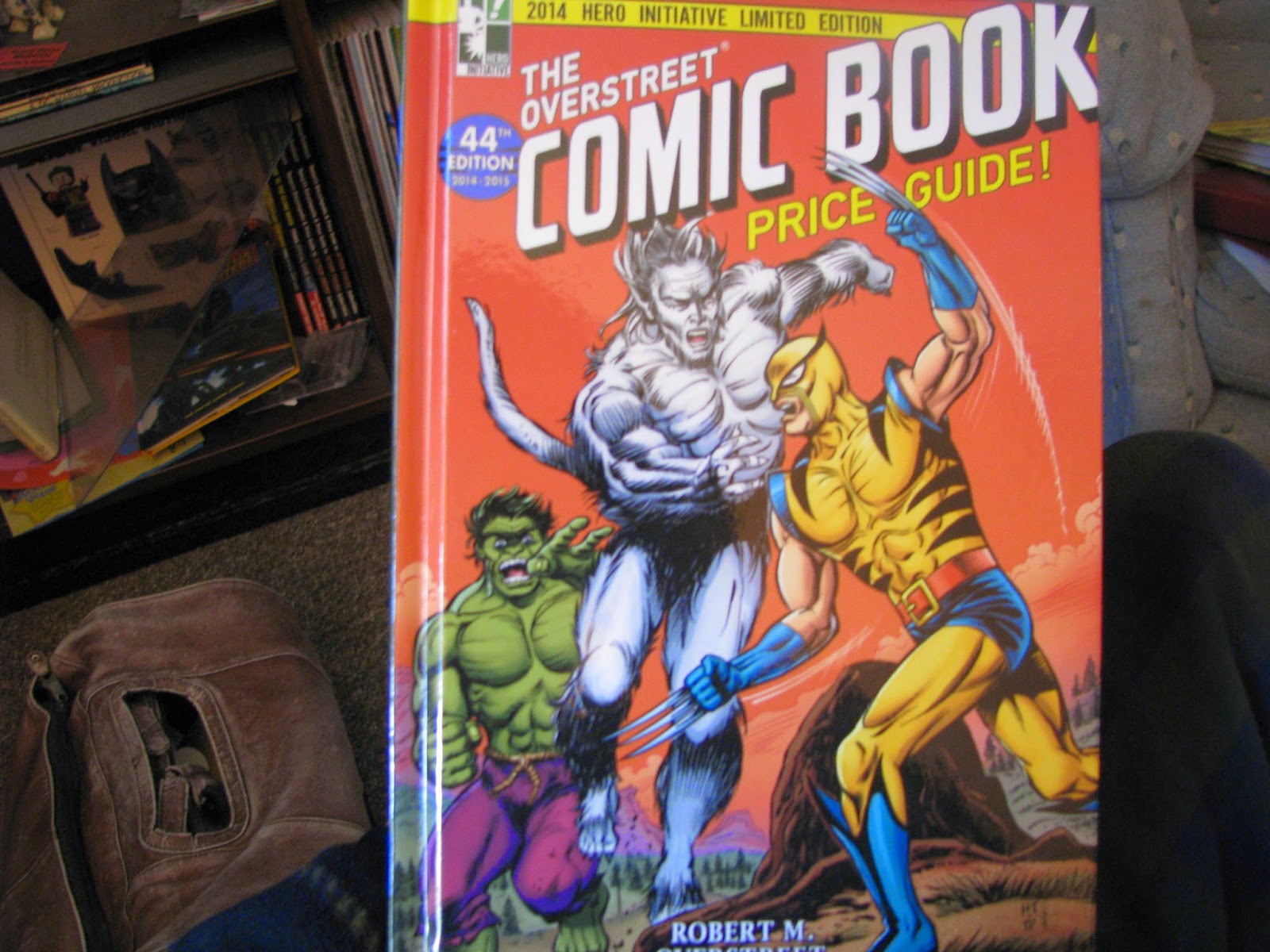 2014 was Herb’s year to be celebrated and he was in super high demand for signing things due to the 40th anniversary of Wolverine.  He was either at a panel or at his booth, but at his booth his line was very long.  So, I waited and waited for a chance to see him, usually assessing the situation and leaving to come back later.  I finally stood in line and got behind a guy who was having Herb sign a “gazillion” Incredible Hulk #181 prints (and maybe something else).  I think Herb got $250 for it.  Herb told me to come back later that he “had a special business proposition for me”.  So I did and I asked him what it was.  He said, “Oh, I just wanted to find time to sign your stuff.”  The only thing I had was the Hero Initiative HC Price Guide that had a special cover done by Herb.  His last words to me where these… 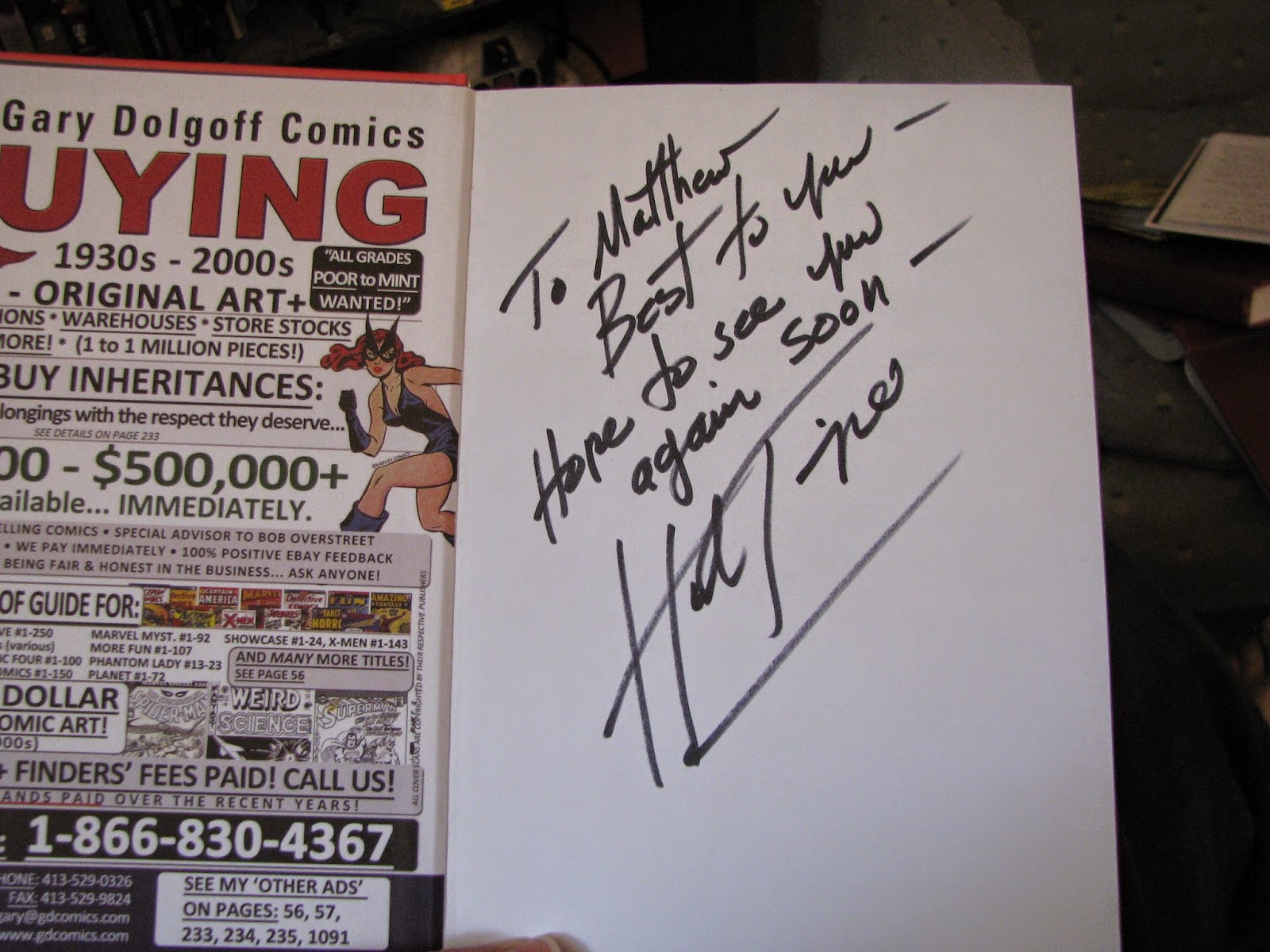 I can’t believe he’s gone.  I miss him and the future opportunities I thought I had to talk to him.  However, I do expect to see him again one day in Heaven, since we are both Christians.  When we do speak again it probably will seem like “soon” to him, now that he has an eternal perspective.  Please keep Patricia and Herb’s children in your prayers.  I know Herb was married once before and I don’t know what happened in that relationship, other than divorce is always painful, but I do know that he and Patricia loved each other very much.

And finally, I leave you with the last bit of Herb’s review of Eric’s work (see youtube link inc case blogger video doesn't load well).  I had to change batteries, so there was an abrupt end to the first part.  But take the brief exchange as an encouragement to the next generation of comic artists. He would say the same thing to you if he were still around.

Until next time, whenever that may be.

I’m also including links to past posts about Herb or his work below.

I would love to one day get some original art from Godzilla #9.  I love it when the gambler and Godzilla are doing the same depositing.  It's a great page layout.