To say I've had a rough week would be an understatement.

You see I've been SICK -- actually "have been" is a little presumptuous as I'm still not well yet. Let me describe some of the symptoms by quoting some familiar lines from the comics:

"Uhh! One side of me is being FROZEN -- while the other half feels like it's on FIRE!!"

And if you can imagine one of Don Martin's characters vibrating violently from Mad Magazine...

At least the high fever episodes seem to have passed, but I'm still sore from the full body convulsions I had at the onset (like doing a million tummy crunches). I thought I was on the mend when I ran into Jim on Wednesday, but I wasn't even able to purchase my books, because I started feeling bad (I did get ALL my free comics today though).

So, while today hasn't been great, there was some good news awaiting me at home. My Herb Trimpe commission sitting in a super-sealed package. This was the drawing I alluded to in my Comic-con post. Well the picture is inked now and I think my likeness came through wonderfully. Although, I guess if women can have supernatural proportions in comics, guys can too (I'm more fluff than buff). I'm really pleased with the end result and man to see the original inks...

Well, the idea was to recreate (not the full cover, just the figures) Hulk #130 where Banner faces off against his green alter-ego. It was originally a pencil sketch, but since I was with all my kids that day (see picture at the bottom), I couldn't really pose for it, so he had to approximate my likeness. That was in 2008. So this year, I asked him how much it would be to ink it and refine my face on the drawing. The price was right and he took it home with him and I e-mailed him some photos. Anyway, enough rambling, let's look at the pictures: 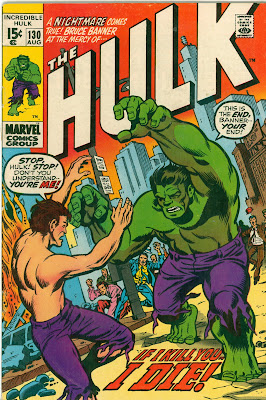 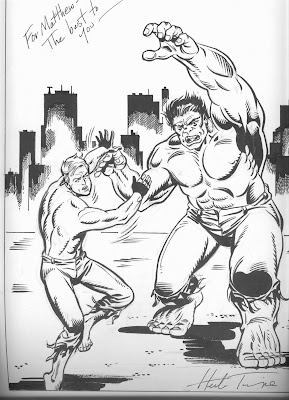 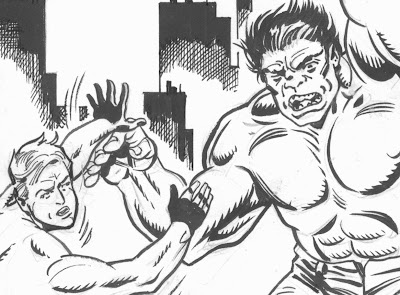 The close-up. If you look closely you can see the remains of the penciled turned head with glasses.

I LOVE IT AND I'M NOW A COMIC BOOK CHARACTER!!! How cool is that?!
(And before anyone makes any snide remarks, I'm the one on the left in the drawing.) : ) 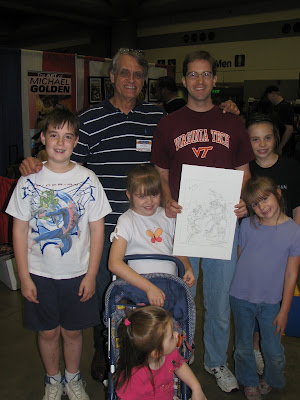 Want to order your own Herb Trimpe commission? Well, you can start the process here.