What I’m Getting Thursday September 8

The holidays always screw up the shipping schedule, but that was fine by me this last week as I’m only slowly catching up with my comic reading. Plus this is a five week month which means hopefully a few lighter weeks.

I’m happy that convention season is winding down. I get tired of all the announcements as the focus becomes too much about what is coming out down the road as opposed to interviews with creators about what they are doing or articles talking about general trends in comics. With this week being a huge Bat week that issue comes to mind as all sorts of news is being released about what is happening once Bruce Wayne returns. Articles on Batman Inc. and other books and we haven’t even wrapped the actual series about Bruce’s return. This week we have Batgirl #14, Batman #703, Batman and Robin #14, Batman Odyssey #3 (of 12) and Red Robin #16. What is nice about all the Batman stuff is that it has all been at least good and sometimes very good. It is probably the one place that I’m still enjoying the normal super hero stuff on a consistent basis.

The rest of my DCU core books consist of Green Lantern #57 and Justice League Generation Lost #9. I’m enjoying Green Lantern and Generation Lost has started to win me over but the pace of the books feels slow. It is not as bad as when some writers starting doing every arc as six issues as they were writing for the trade, but it is just too slow of a pace. I want an in continuity book to have something happening every issue.

The other material published under the DC umbrella I don’t consider part of the core DCU. Doom Patrol #14 is out, but Giffen is making this book something unique and very much its own thing. I would call it Vertigoish with a super hero style of artwork. Doc Savage is back on my list with the newest issue (#6). It has a new creative team and I like how DC has created a new world populated with non-powered heroes mixing a Batman with Doc Savage and the Spirit. The first creative team was very flat and uninspiring with the Doc Savage work and regardless of how good the Justice back up was, I’m not paying $4 for just liking 10 pages of a book. So we will see how Brian Azzarello and Ivan Brandon can do writing Doc Savage. The last book I include in the segment is The Mighty Crusaders #3 (of 6). As the Red Circle is officially part of the DCU the characters have not been fully integrated yet. This book is a little dense as I think the writers are trying to do too much and it ends up with an almost European flavor, but it is enjoyable.

Vertigo books are always welcome and this week I have three from that box. American Vampire #6 is by Scott Snyder as writer now and of course Rafael Albuquerque as artist. Rafael has to feel like he is on vacation as this is a normal size issue and not the extra sized book the first five issues were. Scott has had a meteoric rise as a star in the comic book world as he is now a DC exclusive writer and has been given the keys to Detective Comics. I have enjoyed all of Scott’s work and truly expect him to be a name on par with people like Bendis, Morrison, Johns, Brubaker and others down the road. Of course knowing how hard he works to get his scripts right I hope he doesn’t overextend his commitments as I have seen some writers do from time to time. The second Vertigo book is Daytripper #10 (of 10), truly an outstanding series and needs a hardcover collection to be done on this book. I can’t wait to see how they end this series that has truly touched my heart and made me

contemplate my own life at times. Last and far from least in Cuba My Revolution HC, an OGN by Inverna Lockpez writer and Dean Haspiel artist. It is a testimony to the editors at Vertigo that I’m willing to take a flier on a $25 HC by a writer I know nothing about and according to their own hype is a first time writer. Vertigo’s solicitation reads “From the moment Fidel Castro captures Havana in 1959, 17-year-old Sonya believes in the promise of the Cuban Revolution. A medical student who dreams of becoming a painter, she joins the militia and finds herself caught between idealism and ideology. As a volunteer medic at the Bay of Pigs, she's imprisoned and tortured by her own comrades. Physically and emotionally scarred upon returning home, Sonya searches for fulfillment in art. But when she realizes that none of her efforts, by gun or brush, fall in line with Castro's regime, Sonya must make agonizing choices between her family, her lover and her beloved country. This graphic novel is inspired by the true experiences of first-time author and Havana-born artist Inverna Lockpez” It sounds interesting.

The week from Marvel is becoming its normal small selection I should consider putting them at the end of the list. I’m following the train wreck of Daredevil to its bitter end as I have a morbid curiosity to see how Marvel is going to wrap up this title for now. I believe this issue, #510, is the third to last issue. The whole Shadowland thing has been a very bad ending to a story that had a lot of potential. The only other Marvel books are Thanos Imperative #4 (of 6) and Thor The Mighty Avenger #4. The DnA cosmic side of the MU has lost a little of its heat lately and I think it is due to all the characters are now crammed into one series. I hope there are future plans to expand this stuff back into additional series as I have been enjoying DnA’s work on this corner of the MU. Thor The Mighty Avenger is the only Thor title I’m buying right now. I know it was suppose to be a Marvel Adventure title, but it is frankly one of Marvel’s best books on the stands. 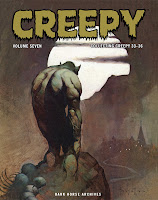 The “everything else” category has a lot of great titles this week. BPRD Hell On Earth New World #2 (of 5) is out and I enjoyed the new status quo set last issue and find that BPRD is always a very good series. I think this series does not get the buzz it deserves from the greater comic community and I wish Dark Horse would collect this as a hard cover (I know they have stated it is not going to be, but it should be). Dark Horse has a huge week with Creepy Archives #7, Doctor Solar Man of the Atom #2 and Fear Agent #29 all hitting the stands Wednesday. I really need to start reading my Creepy Archives as I’m still finishing Volume 1 (yikes).

What is very telling in what I’m buying is that both Dark Horse and BOOM have more books on my list this week then Marvel. BOOM has 28 Days Later #14, Calling Cthulhu Chronicles #3, Farscape Scorpius #5 and Irredeemable #17. Look at the spectrum of books from BOOM, post apocalypse story, horror, science fiction and super hero. Granted two are based off other medium, but they are continuing stories. BOOM cares about producing good stories to read, not just one genre. It makes for a better mix of books and one thing Marvel is lacking is any true mix of their material, DC’s Vertigo line has always allowed creators to have multiple outlets for what they want to do. Vertigo, BOOM, Dark Horse, IDW and others are where creators are taking their projects. Marvel, where my original love for comics was developed, needs to expand into other genres more or just stagnant further. 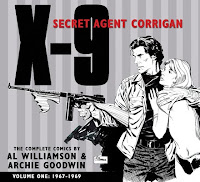 To round out my list I have Kill Shakespeare #5, Green Hornet Year One #5 and X-9 Secret Agent Corrigan HC Volume 1. X-9 was a newspaper strip I missed, but it is by Archie Goodwin as the writer and Al Williamson as the artist. It does not get any better than that. I will be perusing this book as soon as I get it home Thursday.
I glad I got the break last week, but I have grown so used to doing this post that I kind of missed doing it as it is a nice way for me to examine what I’m getting and constantly evaluate my list.
Posted by Jim at Monday, September 06, 2010