Jim: Geez summer is still in full swing and we are talking about books in November. The whole thing seems batty to me.
Lee: At this point, I’m ready for the Christmas releases because I’ve been a good boy and deserve a big Christmas.
Gwen: Sadly I'll be pretty much skipping Christmas this year because I need to save all my money for my wedding. But there are always comics to look forward too! 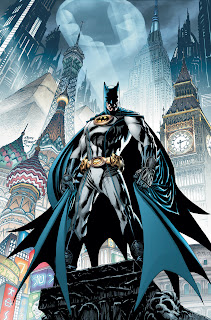 BATMAN, INC. #1
Written by Grant Morrison Art, cover by Yanick Paquette
1:25 Variant cover by Andy Kubert
1:200 Sketch variant cover by Yanick Paquette
Grant Morrison continues his earth-shattering run on the Batman titles with this exciting, new ongoing series! Featuring art by the remarkable Yanick Paquette, BATMAN, INC. marks the next stage of evolution for The Dark Knight. This can’t-miss series will star not just Bruce Wayne as Batman, but also a huge number of guest-stars! Don’t miss out on this all-new start to a stunning direction for Batman!On sale 3 • 32 pg, FC, $3.99 US
Jim: I’m a big Morrison fan, BUT this is a little frightening. Batman is going to train people to be Batmen? The premise sounds horrible and DC is moving towards the 32 page $4 comic, which means it is an easier book to drop.
Lee: I find it more amusing that you know the concept for the series but it isn’t written anywhere in the hype. Comics are so over hyped, so far in advance, that previews are almost outdated by the time they arrive.
Gwen: This seems like a terrible idea - especially since Bruce was always against involving anyone else in his work if he could avoid it. 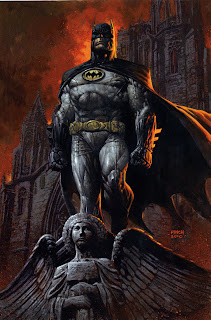 BATMAN: THE DARK KNIGHT #1
Written by David Finch Art,
Cover by David Finch & Scott Williams
1:25 Variant cover by Andy Clarke
1:200 Sketch variant cover by David Finch
Comics superstar David Finch takes full creative control (both writing and illustrating!) on this brand-new Batman monthly series! Joined by the best of the best – Scott Williams – on inks, this new series is sure to be on everyone’s must-read pile! Delving into the more supernatural and esoteric areas of Gotham City, the 6-part storyline explores the horrific murder of one of Bruce Wayne’s childhood friends…and the terrible ramifications the brutal crime has on Batman’s life On sale 24 • 32 pg, FC, $3.99 US
Jim: Many, many artists have been top notch writers, but I’m still scared when they are given their first book and it is a new Batman #1, wow DC really wanted David Finch. The premise sounds good and Finch should be giving it his best, so we shall see. Another $4 32 page book.
Lee: Let’s be fair, many, many artists have been crappy writers too. This high profile, this soon, reminds me of McFarlane’s Spiderman. I’m waiting for reviews.
Gwen: Can I just ask, how does one "take over" for a "brand-new" series? The concept sounds interesting though. 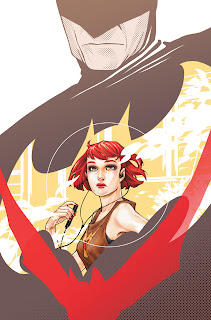 BATWOMAN #0
Written by J.H. Williams III & W. Haden Blackman
Art by J.H. Williams III and Amy Reeder with Richard Friend
Cover by J.H. Williams III 1:10 Variant cover by Amy Reeder
Featuring a unique story composition that combines the art of Eisner Award-winner J.H. Williams III and Amy Reeder (Madame Xanadu), this special #0 issue acts as a new introduction into the life of Batwoman! Things pick up roughly where the Batwoman: Elegy HC left off, and this issue acts as a primer for the upcoming new series featuring multiple award-winning creators! On sale 24 • 32 pg, FC, $3.99 US
Jim: $3.50 was pricey enough but another $4 book with only 32 pages, I do not like this stuff. This book has two great artists on it and I enjoy Batwoman so it should be decent, but we have rookie artist-writer #2 with JH Williams. At least he called in help unlike Finch who's going it alone.
Lee: I’m not sure I care. The Batwoman concept is how old now? Six years? Seven years? This seems like expansion for the sake of expansion.
Gwen: Why are there two artists on this book? Amy Reeder alone makes me want to pick up this book - any other artist I could care less. Hopefully Jim will get the Amy Reeder cover on this one! I feel like Lee right now - more interested in the art for this one than the story. 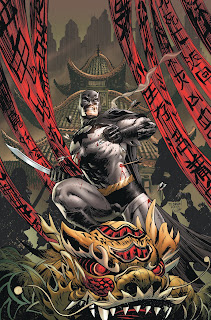 BATMAN #704
Written, Art & cover by Tony Daniel
Bruce Wayne may have returned, but when an aging but wealthy technology developer comes to Gotham with his beautiful daughter, it turns out he’s in search of a joint project with WayneTech. DNA tracking is the name of his game, and there are others interested in his proposal. But when the developer goes missing, Batman finds that his tracks stop in the city’s violent Chinatown neighborhood, where a new deadly Triad gang has taken root. Guest-starring I-Ching! On sale NOVEMBER 17 • 32 pg, FC, $2.99 US
Jim: See tony Daniel is one of those artists who have never quite made it as a writer yet. He has some great ideas but I think he needs a strong editor.
Lee: I look and this cover and wonder how Batman became the new Wolverine. Sheesh, shouldn’t he be able to avoid at least ONE arrow. But, I’m sure he taunting them with “it’s only a flesh wound. I’ve had worse!”
Gwen: Huh, it's rare to see American comics with only one creator (at least for the mainstream stuff). I wonder how much that will slow up production. 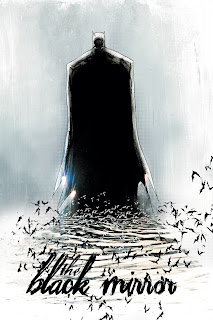 DETECTIVE COMICS #871
Written by Scott Snyder Art and cover by Jock
Co-feature art by Francesco Francavilla
In “The Black Mirror” part 1 of 3, a series of brutal murders pushes Batman’s detective skills to the limit and forces him to confront one of Gotham City’s oldest evils. Plus, in the start of a Commissioner Gordon second feature also written by Scott Snyder, when a figure from the past returns to Gotham, Jim Gordon must face some of his darkest demons. On sale 24 • 40 pg, FC, $3.99 US
Jim: Now we are talking! My favorite raising star, Scott Snyder, with Jock on Detective Comics, what is not to like? The full Bat line is being given a face lift and it is going good. I think DC is being smart by trying to deal from strength but this could be a severe over reach and could even be too much Batman for the average fan. Still, out of everything so far, I’m looking forward to this book the most.
Lee: I’m surprised it’s taken DC so long to flood the market Marvel style. This is no different from the six Avengers titles, or the six Spiderman titles, or all the x-titles. I think is just following Marvel’s lead and further saturating the market.
Gwen: It does seem like an overdose of Batman. I'm not sure how much I care about the Jim Gordon story - I mean I guess if Bruce can still be Batman Jim Gordon can still fight crime at 60 something but I've kind of enjoyed some of the newer cop characters like the new detective in Batgirl. 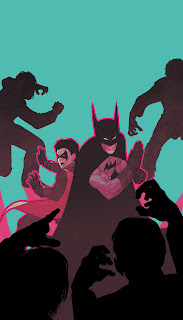 BATMAN & ROBIN #17
Written by Peter J. Tomasi Art, Cover by Patrick Gleason & Mark Irwin
1:10 Variant cover by Gene Ha
Kicking off the action is “Dark Knight, White Knight” part 1 of 3, as Bruce Wayne returns from the dead, and Gotham City finds itself locked in the grip of chaos! Dick Grayson and Damian Wayne come face-to-face with what could possibly be the strangest Bat Villain yet. Who is the White Knight, and why is he hell-bent on making Gotham City into Heaven on Earth? On sale 10 • 32 pg, FC, $2.99 US
Jim: And even more happy news as Dick remains as Gotham’s Batman and we get Peter Tomasi as the writer. Peter had made Nightwing’s book back into a top notch comic and I trust him to continue to make this series shine.
Lee: It will be interesting to see two Batman titles, showcasing the same costume but having different people under the mask. Nope, that’ll never confuse the casual fan.
Gwen: Yay, I don't care that there's multiple Batmen as long as we keep the Dick and Damien team together. As far as I'm concerned they are Batman and Robin and I'm happy we'll get more stories with them.

Jim: No book, just that I counted 19 books under the Batman umbrella. They add Birds of Prey, Outsiders and some others to this grouping, but 19 books basically tied to Batman, talk about a lot of eggs in one basket. This can work as long as DC commits to keeping top talent on the books, but when Morrison leaves it is a good thing DC has been developing a strong stable of writers, because this is a lot of books to be putting in one franchise. It is now akin to Marvel’s X-Franchise, Batman Inc indeed.
Lee: It’s interesting that Batman, and not Superman is seen as the franchise for the company. Yes, part of that is based upon the success of the movies but I wonder if it’s in part because Superman is too ‘good’ and, these days, we want our heroes to be slightly dirtier and grittier.
Gwen: Superman has plenty of books - Action, Superman, Supergirl just as the main titles and then look at how many supporting books we get with all the New Krypton stuff and then the Elseworlds House of El... Superman type characters are just a bit harder to tell stories with sometimes I think because of the power-level of the heroes. With the Batverse it's easier to have multiple titles and characters because they can't just quash mundane crime the way Supes can. Also Superman is still more popular mainstream than Batman - we always sold a LOT more Superman merch. than Batman merch. at Spencers.
Posted by Lee at Wednesday, September 08, 2010