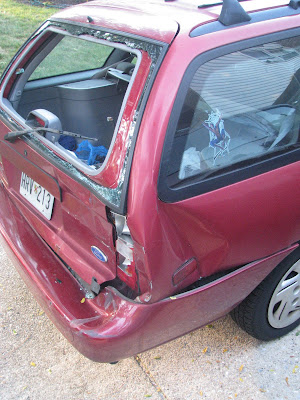 Well, it’s been another crazy week for me. Last week I was sick and this week I was in an automobile accident, when I was rear-ended by a tractor-trailer on I-95 while driving to work. During some of the downtime I had due to back and neck soreness, I was able to finish reading my Thor: Tales of Asgard HC. Let me just say – this is a WONDERFUL book!!! 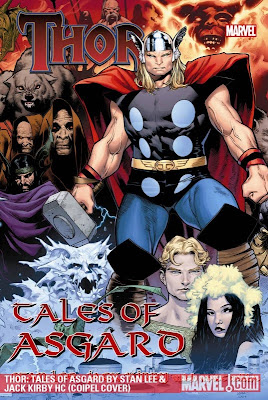 The retail price is $30 and it would even be worth it at that price given its over-sized format. I got it for only $15 at comic-con, so that was a real bargain. This is also the book that contains my Walt Simonson sketch with John Workman sound effects. So, it already has a special status in my collection.

This book collects the entire Stan Lee/Jack Kirby Tales of Asgard stories from Journey into Mystery #97 through Thor #145. Each tale is only five pages long, but Kirby packs a lot of story into those pages. Some stories are stand alone or loosely collected into themes, but several of them are multi-chapter epics. Since the book doesn’t provide a table of contents (the only blemish), I’ll provide one here (I’m improvising for some of the headings):

The Boyhood of Thor
4. The Storm Giants
5. The Invasion of Asgard!
6. Death Comes to Thor! – Thor is finally worthy enough to lift Mjolnir.
7. Thor’s Mission to Mirmir!

Biographies in Depth of Asgard’s Heroes
8. Heimdall: Guardian of the Mystic Rainbow Bridge!
9. When Heimdall Failed!
10. Baldar “The Brave”
11. Baldar Must Die!

Biographies in Depth of Asgard’s Heroes (cont’d)
16. The Coming of Loki!
17. The Boyhood of Loki!
18. The Golden Apples! (non-Loki interlude: Lee/Kirby version of Little Red Riding Hood)
19. A Viper in Our Midst!
20. The Challenge! – King Hymir has the most outrageously HUGE helmet I’ve ever seen!

The Coming of Ragnarok
21. The Sword in the Scabbard!
22. The Crimson Hand! – where Thor uses a truth glove (really cool)
23. Gather, Warriors! – first appearance of the Warriors Three
24. Set Sail!
25. Maelstrom!
26. The Grim Specter of Mutiny!
27. The Jaws of the Dragon!
28. Closer Comes the Swarm!
29. The Queen Commands
30. The Summons!
31. The Meaning of Ragnarok!
32. Aftermath! – just a vision of what will happen at Ragnarok, looks like the beginning of Kirby’s Fourth World series.

A sub-story that continues directly from Ragnarok
33. The Hordes of Harokin! – Loki actually gets punished in the Well of Eternal Sleep!
34. The Fateful Challenge!
35. The Warlock’s Eye!
36. The Dark Horse of Death!

Fafnir, the Dragon
37. When Speaks the Dragon!
38. The Fiery Breath of Fafnir!
39. There Shall Come a Miracle!

Mogul and the Mystic Mountain
40. The Tragedy of Hogun!
41. The Quest for the Mystic Mountain!
42. The Secret of the Mystic Mountain!
43. The Battle Begins!
44. Alibar and the Forty Demons!
45. We, Who are about to Die…!
46. To the Death! – Bill Everett embellishment (If only he had inked every story – more like Mike Royer). Also, Volstagg finds the weapon needed to save the day by accident!
47. The Beginning of the End!
48. The End!

You would have to purchase the first six Thor Marvel Masterworks volumes to get all these stories. That would be over $150 IF you could get them for $25 a piece, the retail price would be closer to $300. Plus, you’d have to skip over the lead story in each issue to get to the Tales of Asgard backup. More importantly you would miss out on the GORGEOUS recoloring by Matt Milla. Let’s just say that you hardly notice Vince Colletta sketchy inks with Matt’s coloring. I know some people are purists and want only the original color scheme, but this totally works here.

“But wait! There’s More!”
In addition to these 48 magnificent tales, you also get a recoloring of Thor’s origin from Journey into Mystery #83. It’s one of my favorite origin stories (I used to read it in my Origins of Marvel Comics book). You should see the storm clouds on the cover! We also get the recolored covers for JIM#97, and two Tales of Asgard reprint books from 1968 and 1984.

“That’s Not All!”
You also get some Handbook of the Marvel Universe entries about Asgard and it’s key players, including some maps and diagrams. Sure you may have these somewhere else, but it’s super nice to have them all collected together.

“Better than Steak Knives”
The most awesome extra in this tome is the Oliver Coipel six page fold-out that combines the six covers from the recent Tales of Asgard (funding the HC) mini-series. One side is the finished product and the other side is the original drawing version. There’s even a key to each of the characters in the drawing – all 63 of them!

I slipped in a few notes in the ToC above about some of the stories, but I have to say that Volstagg really stole the show for me. He’s absolutely hilarious. I know we’ve all been told that Kirby did most of the plotting and Stan just scripted, but the two mesh perfectly here. Volstagg wouldn’t be nearly as funny without Stan’s dialogue. But the humor is already there in Kirby’s layouts. Just a side note, I think Odin changes his outfits more often than the Wasp!

I can’t praise this book enough! The presentation, the coloring, the stories, the extras, etc. It all adds up to one spectacular collection that every Thor fan should own. There just isn’t a better way to read these stories and at five pages per tale, you can easily get through one or two before retiring for the evening.

Email ThisBlogThis!Share to TwitterShare to FacebookShare to Pinterest
Labels: reading my HCs, Review