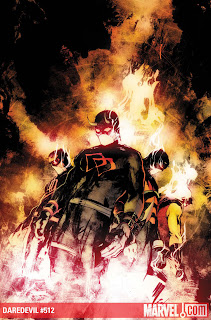 SHADOWLAND #5 (of 5)
Written by Andy Diggle Penciled by Billy Tan
Cover by John Cassaday Variant Cover by Billy Tan
With the help of his former enemy-turned-champion, Daredevil has thwarted his former friends and finds himself prepared to claim all of New York for himself. The chaos of Shadowland has reached a boiling point, and Daredevil himself may not survive to see the result! 32 PGS./ $3.99
DAREDEVIL #512
Written by Andy Diggle Pencils & Cover by Roberto De La Torre
A Shadowland Tie-In: Final Issue! Years of acting as the Guardian Devil of Hell's Kitchen have taken their toll on The Man Without Fear. Hell's Kitchen lies in ruins, and it is up to the people of New York to start anew and begin rebuilding. In this last chapter of his story, will Matt Murdock at last find final redemption for the events of Shadowland? 32 PGS./ $3.99
Jim: The end of Daredevil! Oh no! How we will survive the six issue mini-series about what happens why we wait for his revival. The only question I have will it be six months, one year or will they go for 2 years before Matt is back having gone through a redemption. After Bendis and Brubaker, Diggle lost his way with this book and I thought it could have been great with DD trying to reconcile running the hand and being a hero, but they copped out for this tripe. I bet on one year.
Lee: It seems like it’s been awhile since we’ve had a truly gruesome cover from Marvel but the draught is over. Not only is this ridiculously bloody for no reason, but it’s also a pathetic swipe of the cover to DD 179. I’m not sure if I am more impressed by the artists ability to ‘improve’ the original with the addition of a playing card in the jugular (a very nice touch) or make it appear like Wolvie is giving everyone the finger. Simply awful.
Greg: I'm actually sick of cover homage's in general. The next artist who redoes DD 179 or the end of the Dark Phoenix Saga or especially the dead Supergirl from Crisis on Infinite Earths needs their drawing table confiscated. 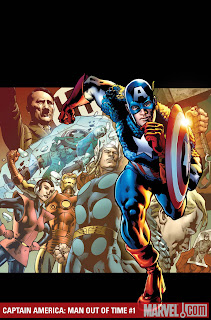 CAPTAIN AMERICA: MAN OUT OF TIME #1 (of 5)
Written by Mark Waid Penciled by Jorge Molina
Cover by Bryan Hitch Variant Cover by Arthur Adams
Beginning a five-issue mini-series chronicling the rebirth of Captain America! When the Avengers pull a mysterious, tattered soldier from the sea, they unwittingly bring back to life the Living Legend of World War Two--a man whose memories of a life sixty years ago are as fresh as yesterday! How will Steve Rogers, frozen in suspended animation for half a century, adapt to the world of the 21st century? 32 PGS./ $3.99
Jim: I had my say awhile back about this and will say it again, it is a bad idea. Pulling Cap ahead to just being revived in the 21st Century just highlights all the inconsistencies in a characters history. Marvel’s sliding continuity scale is a bad concept and highlighting it makes it worse. Of course the Cap movie is coming out so green light all Cap mini-series ideas.
Lee: I disagree with you on this one. The farther removed from WWII we get, the greater society has changed. I think it’s a great way to freshen up a very old character. It’s better than magically making a marriage disappear, that’s for sure.
Greg: You'll never be able to set the timeline in stone, so you're going to always get this sliding scale stuff. There's some interesting material to be mined here. They usually only deal with Cap's being time displaced on a page or two at a time. Besides, I've always got time for Mark Waid on Cap. 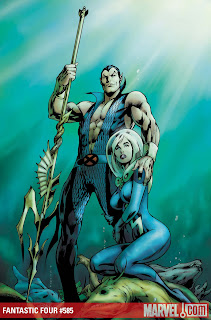 FANTASTIC FOUR #585
Written by Jonathan Hickman Penciled by Steve Epting Cover by Alan Davis
World's apart from each other, the Fantastic Four embark on their individual journeys with one destined to end in tragedy and change the face of Marvel's first family. It's Three, part 3:'The Last Kings of Atlantis'! 32 PGS./ $2.99
Jim: You have to love the man-ho Namor. This guy will sleep with your wife or girl friend the second you turn around. The smell of fish in your bedroom is another man on your woman. White Queen, Susan Storm, Namorita, Lady Dorma, probably Sharon Carter and Mockingbird and maybe Mary Jane.
Lee: Ummm, yeah. Since I haven’t been following Namor’s latest exploits, I’ll just trust your judgement.
Greg: The only thing better than Man-Ho Namor, is Namor trying to play basketball. 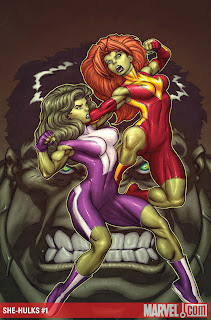 SHE-HULKS #1
Written by Harrison Wilcox Penciled by Ryan Stegman
Cover by ED Mcguinness
Spinning Out Of World War Hulks! The Sensational She-Hulk Returns! Jen Walters teams up with Lyra, the all-new Savage She-Hulk, to bring the hurt down on the fugitive members of The Intelligencia. Klaw, Mad Thinker, Red Ghost, Trapster, and Wizard tried to take over the world and now must pay for what they've done. 40 PGS./$3.99
Jim: Yes even the Hulk is branching out with multiple books and now adding the “family” title of She-Hulks. I can’t wait for the Deserts of Arizona series.
Lee: I don’t know why you are complaining, this is just awesome. It has two huge women, with impossibly large boobs that seem to float in the air like balloons, fighting each other. Seriously, what’s not to like?
Greg: Nothing, as far as George Perez is concerned. 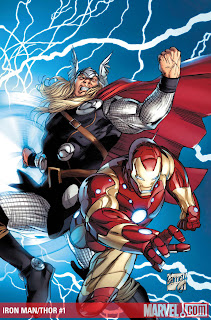 IRON MAN/THOR #1 (of 4)
Written by Dan Abnett & Andy Lanning
Penciled by Scot Eaton Cover by Ron Garney
Thor, God of Thunder, Son of Asgard, heir to the ancient and mythic heritage of divine power! Iron Man, invincible hero, miracle of technology, offspring of scientific genius and engineering wonder! These two mightiest of Avengers come together to face a menace that is both magical and technological, and which threatens to wipe away the pantheons of legend and science so it can replace them with a shocking new order for the Twenty First century! 32 PGS./ $3.99
IRON MAN: THE RAPTURE #1 & #2 (of 4)
Written by Alexander Irvine Penciled by Lan Medina
Covers by Tim Bradstreet
4-issue Marvel Knights limited series! A pulse-pounding cyberpunk thriller by Alexander Irvine (The Narrows) and Lan Medina (Deathlok: The Demolisher). The future belongs to Tony Stark. So when a violent heart attack pushes the billionaire playboy and visionary inventor to the brink of death, he’s not about to go down quietly. Enter Stark 2.0 – a fusion of man and machine unlike anything the world has seen before, an entity that will push its host past the brink of sanity as it attempts to recreate the world in its own image. With Stark Industries in lockdown, it’s up to Starks’s associates Pepper Potts and Jim Rhodes to stem a technological virus that might well contaminate the entire world. But to save the day, they’ll need Tony’s help – if, indeed, there is anything left of him. 32 PGS. (each)/ $3.99 (each)
Jim: Do over $600 million with two movies and man will they punch out mini-series to put out trades till the cows come home. It is such overload that an Iron Man fan has to choose one or maybe two books and ignore the rest or their whole budget could be spent on just Iron Man.
Lee: Just part of the new ‘family of books’ concept. It’s great if you love Iron Man, not so good otherwise.
Greg: Why are Abnett and Lanning writing about this and not about Galactus' corpse being turned into a space missile? Will Galactus' corpse as a space missile be in this issue? I hope so. 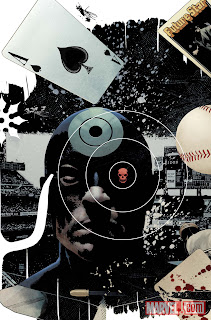 BULLSEYE: PERFECT GAME #1 (of 2)
Written by Charlie Huston Penciled by Shawn Martinbrough
Cover by Tim Bradstreet
There was a year when no one knew where he was. When Bullseye “the world’s greatest assassin“ simply vanished without a trace. In the glare of the white hot lights, no one noticed the lanky stranger with the rubber arm, throwing heat that could, well, take off a man’s head. See, every man needs a challenge, a moment when he faces impossible odds, when he looks deep inside himself and sees what he’s really made of. Bullseye’s next pitch is one for the history books. 32 PGS./ $3.99
Lee: I’m betting this will be absolutely fantastic. Huston wrote the Moon Knight with Finch on art chores a couple of years ago and it was great. I’ve read some of his prose work too and he knows bad ass characters. There are few single issues that get me super exited anymore but this is one of them.
Greg: Huston's a good writer. And everyone always forgets Bullseye used to be a pitcher. Could be good.
Jim: Could be good, agreed. I'll await buzz on the book before investing. Side note, just make it an oversized one shot and not a two issue mini-series. 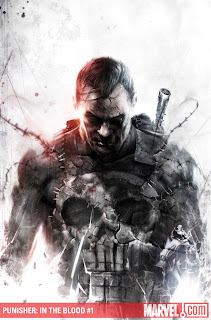 PUNISHER: IN THE BLOOD #1 (of 5)
Written by Rick Remender Penciled by Roland Boschi
Cover by Francesco Mattina
Frank Castle is back. Back for revenge. Back in New York. Back to cleaning its streets. Back together, healed and strong, his mission resumed as he partakes in the sweet wet work, and notches up one of the highest body counts in Punisher history. Cyber sensei Henry Russo is back, keeping Frank proficient with an eye in the sky. Others are back as well – two of Frank’s most sadistic enemies united in a new vindictive plot: Enter the Jigsaw Bothers! 32 PGS./ $3.99
Jim: So about two years ago they started the Punisher, went insane and did Franken-Castle and now are restarting the series as a mini-series and oh look it is $4 for a standard size comic. Awesome!
Lee: You call Franken-Castle insane but I bet you get the trade! Anyway, Remender has been doing a great job with the character so far so I expect more over the top, violent goodness again.
Greg: Jim, you gots ta stop hatin'. Remender's Punisher run might be the perfect comic book. That is a true fact. 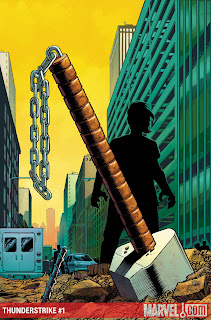 THUNDERSTRIKE #1 (of 5)
Written by Tom Defalco Pencils by Ron Frenz & Todd Nauck
Cover by Ron Frenz
A proud legacy continues! Eric Masterson was the first to wield the enchanted mace called Thunderstrike and he sacrificed himself to save the world. But what happened to the mace? Has it been lost for all eternity or does the world still need heroes? Has the time finally come for someone else to follow Eric’s journey and take on the mantle of Thunderstrike? Join us as the Marvel Universe welcomes back the everyman Avenger, Thunderstrike! Guest-starring Steve Rogers, Sharon Carter and the rampaging Rhino! 40 PGS./ $3.99
Jim: Geez Thor is beating out Captain America for add on mini-series, even Thunderstrike is making a comeback, it is the nineties again.
Lee: There’s a movie coming out, for goodness sake! Why are you surprised by all the add ons? It’s just the typical flood prior to the actual movie release. As for Thunderstrike, he was a fine second tier hero, but I’m more excited to see Frenz’s art on a main stream book again.
Greg: Never say Marvel is without a heart. They cancel one series by Tom DeFalco that they really shouldn't be publishing, but they give him another.
Posted by Lee at Thursday, September 16, 2010