Lee: Dark Horse is on something of a roll lately. After a couple of slack months they seem to be back to the usual high standards I hold them too. In other words, lots of good stuff this month.
Jim: No matter what I think of their choices I trust Dark Horse to produce quality material. I never feel they are publishing stuff just to get it on a comic book rack.

AXE COP VOLUME ONE
Malachai Nicolle (W) and Ethan Nicolle (P)
TPB, 6" x 9", b&w, 120 pages, $14.99
Bad guys, beware! Evil aliens, run for your lives! Axe Cop is here, and he’s going to chop your head off! We live in a strange world, and our strange problems call for strange heroes. That’s why Axe Cop—along with his partner Flute Cop and their pet T. rex Wexter—is holding tryouts to build the greatest team of heroes ever assembled. Created by five year-old Malachai Nicolle and illustrated by his older brother, the cartoonist Ethan Nicolle, Axe Cop Volume 1 collects the entire original run of the hit webcomic that has captured the world’s attention with its insanely imaginative adventures. Whether he’s fighting gun-toting dinosaurs, teaming up with Ninja Moon Warriors, or answering readers’ questions via his insightful advice column, “Ask Axe Cop,” the adventures of Axe Cop and his incomparable team of crime fighters will delight and perplex even the most stoic of readers. • Axe Cop debuted in January 2010 to glowing reviews from Entertainment Weekly, Wired, and dozens of other newspapers and magazines. Read Ax cop online here.
Jim: This is really crazy. I have to pass on it, but it sounds like it could be mad fun.
Lee: It does look like mad fun but I'm not convinced it wouldn't get old when it's read in a collected edition. It's worth your time to check out the link and read a couple of strips. But you will know in a couple of minutes whether or not this is for you.

BUFFY THE VAMPIRE SLAYER: TALES
Joss Whedon (W), Amber Benson (W), Jane Espenson (W), Drew Goddard (W), Gene Colan (A), Tim Sale (A), Paul Lee (A), Steve Lieber (A), Andy Owens (I), and more
HC, 8” x 12 3/16”, FC, 296 pages, $29.99
Before Season Eight, Joss Whedon brought generations of Slayers and vampires to comics with the help of his acclaimed TV writing team and some of the best artists to ever grace the comics page. Now all those stories, plus selected stories from Season Eight, are collected in one deluxe hardcover with a new cover by Jo Chen. • This hardcover collects stories from MySpace Dark Horse Presents #31 and #32; Tales of the Vampires: Carpe Noctem parts 1 and 2; Buffy: Tales of the Vampires one-shot; Buffy the Vampire Slayer: Tales of the Vampires #1–#5; Buffy the Vampire Slayer: Tales of the Slayers #1—“Broken Bottle of Djinn”; Buffy the Vampire Slayer: Tales of the Slayers TPB.
Lee: I am not a Buffy fan. I don’t have anything against the character I just never watched the show so the books really don’t appeal to me. But this kind of collection does! It’s a nice anthology that I’m hoping I only need a little, very little, Buffy knowledge to enjoy. The truth is, the art is too good for me to pass up.
Jim: Liked Buffy the movie, enjoyed the show on occasion when I watched it, never want to read the comic.

FEAR AGENT #32: OUT OF STEP part 5 (of 5)
Rick Remender (W), Mike Hawthorne (P), Tony Moore (P), and John Lucas (I)
FC, 32 pages, $3.50Miniseries, THE END!
Lee: I can’t believe that Fear Agent is finally ending. It got a little too strange for me at the end but overall it was better than average. It’s nice to see stories get a clean ending.
Jim: It has been a terrific series and really Remender's best work to date. 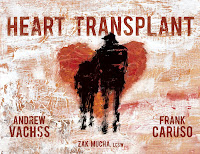 HEART TRANSPLANT
Andrew Vachss (W), Zak Mucha (W), and Frank Caruso (A)
HC, 13" x 10", FC, 100 pages, $24.99
Ltd. Ed HC, 13" x 10", FC, 100 pages, $99.99
For more than three decades, best-selling author Andrew Vachss has battled the lowest bullies: child abusers. In his law practice, he’s represented children and youth exclusively. As art director for King Features for two decades, Frank Caruso has developed a style that speaks to all ages, for all ages. The two are now joining forces to attack school bullying. Universally decried, bemoaned, and condemned. And on the rise. Heart Transplant is aimed at radically changing the way we deal with this most critical issue. The anchoring essay—by clinical social worker Zak Mucha—explains in detail what the reader has experienced . . . and why that experience could change our world. Dr. Joel Dvoskin, President of the American Psychological Association’s Law Society division, says, “[T]his gripping story gives kids and grownups alike a road map to change, both for individual kids and more importantly, for the school as a community . . . This book should be required reading in every elementary school in America[.]”
Lee: On a logical level I understand this book, but on an emotional level it seems to be giving the public yet another padded helmet. I hate to rant but there is a whole market devoted to self help books from everything like this, bullies, to how to pop zits without scars. It's gotten a little out of control. What happened to self reliance, basic parenting, and teaching your kid how to throw a punch to defend him/herself?
Jim: That's funny that you said this Lee, as recently I have been thinking at least half the problem started with the Special Olympics. The philosophy that everyone gets a gold medal and a hug at the end of the race is how we are treating all of our kids. I hear schools stopped handing out "F"s and changed it to "E"s when they decided an "F" was too harsh. Their is a large percentage of people who think every child is a blank slate and can be made great by the right training. It is all crap, some people are smart, some are dumb, some are great in sports, some aren't. I understand wanting to stop child abuse and bullying can be mean, but some of it is just growing up and developing a thick skin. Our kids can't grow up in a bubble and what person "A" defines as abuse or bulling is not how person "B" will see it. Yes smacking a kid with a frying pan is abuse, but is smacking your kid on the butt or raising your voice abuse? Forget raising our kids, lets just hug all of them and hand them a college diploma and send them out into the world.

JOHN CARTER OF MARS: WEIRD WORLDS
Marv Wolfman (W), Howard Chaykin (A), Murphy Anderson (A), Gray Morrow (A), Sal Amendola (A), and Joe Orlando (I/Cover)
FC, 112 pages, TPB, 7" x 10", $14.99
Since his serialized debut in All-Story magazine in 1912, the spacefaring adventurer John Carter of Mars has become one of Edgar Rice Burroughs’ most beloved characters. The star of decades worth of novels and comic books, he’s soon to be immortalized on the silver screen as well, in the upcoming Walt Disney Pictures major film release John Carter of Mars! In this volume, John Carter, an ex-soldier turned prospector, is transported to Mars—“Barsoom,” as it is known to its natives—under mysterious circumstances, and becomes a champion dedicated to protecting his new home and newly found love, the princess Dejah Thoris, from warring alien civilizations and a host of deadly Barsoomian beasts!• Collecting stories originally published in Tarzan #207–#209 and Weird Worlds #1–#7.
Lee: OH OH OH I can’t wait for this !!!! I have the books that these stories are collected from and they are beautiful to look at. The stories are from the 70’s so they tend to be text box and dialogue heavy but it’s still great stuff.
Jim: I re-read this material not too long ago and it is wordy, but I'm a huge John Carter fan, so I'm sold.

MICHAEL MOORCOCK’S ELRIC OF MELNIBONÉ VOLUME 1
Roy Thomas (W), P. Craig Russell (A), Michael T. Gilbert (A), and Neil Gaiman (W)
FC, 400 pages, TPB, 7" x 10", $29.99
Heir to a legacy of tens of thousands of years, Elric sees the power of his decadent empire waning as the Young Kingdoms of humankind begin to stir. The 428th sorcerer-emperor to hold the ruby throne, he is unusually introspective and weak for his race—a combination that proves too tempting for his scheming cousin, Yyrkoon! As Elric is forced to call upon Arioch, Lord of Chaos and Duke of Hell, to rescue his beloved Cymoril from Yyrkoon’s clutches, so too will fate lead him to Stormbringer—a bloodthirsty magic sword with a mind of its own—and a dimensions-spanning encounter with the Four Who Are One.• Collecting the long-out-of-print comics adaptations of the first two novels in the celebrated Elric sequence—Elric of Melniboné and The Sailor on the Seas of Fate—and P. Craig Russell's adaptation of Neil Gaiman’s autobiographical story, “One Life.”
Lee: I wonder if the success IDW is having reprinting some of the early indie books is making DH do it too? No matter why, this is an excellent way to read an amazing series. Thomas was very faithful to the source material in his adaptions and this is some of Russell's best artwork. This is really a can't miss collection.
Jim: Except I never liked Elric, so why I agree with what Lee has said I will pass. 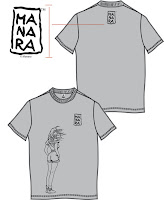 MILO MANARA T-SHIRT
Men’s, M-XL, $17.99, XXL, $19.99
Dark Horse proudly announces the start of what promises to be a long association with Milo Manara, one of the most celebrated and respected graphic-story talents in the world.He has made a powerful name for himself by producing comics that revolve around elegant, beautiful women. It’s no surprise, then, that we have selected one of his lush renderings of a mysterious lady for our debut T-shirt.Printed on high-quality slate gray fabric, this will click as a fashion statement. Sorry, not available in butterscotch . .
Lee: Since Manara is best known for his erotic work, I wonder what this t-shirt implies about the person who wears it? Then again I could wear this on Saturday and my Vivid Studios (tastefully done I assure you) on Sundays. Of course... I would need the L, some might say I would even need the XL... just because. Don't worry Jim, we'll buy you the small (tiny?).
Jim: The GIGANTORMOUS please. I guess the t-shirt is a tease while we wait for Dark Horse to start bringing his stuff to the US, can't wait.

Lee: I'm really enjoying all the 80's reprint material that's available these days. It's like my collection is moving from long boxes to my book shelf.
Jim: Exactly. I love no longer having long boxes and many of the trades and even OGNs I read I pass on trying desperately to have just 4 bookcases of stuff. Of course it is not working and it spills into closets and other places making my wife a little miffed.
Posted by Lee at Wednesday, September 01, 2010