I've said it many times. I'm not an art guy. Oh, sure, there are artists I like and can recognize the style immediately, but art's not really why a I buy a book. Writers are most likely to be why I buy a book, and sometimes a character that I've been attached to. But that wasn't always the case. In my younger days I would buy some books primarily for the artist.
Fortunately Howard Chaykin cured me of that. Back in the '80s I'd read much about Chaykin's work and his art was certainly distinctive and, at that point, appealing. American Flagg, his flagship work, was at the height of its po

pularity. So naturally, I delved into Time2: The Epiphany when First Comics published it in 1986. It was at this point that I realized there was a limitation to what pretty pictures could do in moving a story. I also realized that Chaykin made all his heroes with the same face, which was only confirmed in American Century a decade and a half later.
The plot's ok. It's set in a world that's sort of futuristic. There are robot duplicates of people, with one line that functions as prostitutes that's particularly popular. There are mega-coporations and obessions with immortality. There's a background story, the resolution of which escapes me at the moment, that's a Taxi Driver riff involving the "killing" of hooker 'bots.
The story is that a guy named Maxy has been gone missing for some years but returns, ab 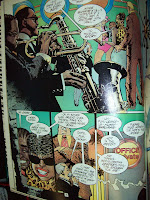 out mid-way through the story, to serve as the executor of his friend's will. His friend was a one time jazz musician who "lost his lip" but, unbenkownest to just about everyone, was a major owner of one of the megacorporations and fabulously rich. His wife is a schemer who probably had him killed, and happens to be the template for the prostitute robots. There are machinations and flashbacks, but the end result is that the dead jazz man had his consciousness downloaded into a robot, which looks just like him and is manufactured by the company he owned, so he's dead but not dead. And the wife who had him killed doesn't get his money. Oh, he still loves her and wants her to stay with him, though she was also sleeping around, as though killing him wasn't enough of a problem. Amidst all that there's a woman who was once attached to Maxy, but he left with some other woman. Nonethelss, she ends up back with him by the end of the story and we have no idea what happened to the other woman he left her for. Somewhere along the line a demon is thrown in, brought in by someone to kill the Taxi Driver guy who's dismantily prosti-bots. The cop in charge of the investigation of the death is also a demon, and there's a gang that had it out for the dead guy that's run by a woman with ties to a demon, too.
TOKtaktaktakTOKtaktaktakTOKtaktaktakTOK
It's all very confusing. 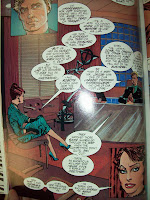 Part of the problem is that Chaykin employs no captions. Everything learned in this book is by the pictures or the dialogue. The former isn't helping out much beyond the usual basics, as the flashbacks don't present anything different in appearance in time than the story in the present. As a result, it's a very wordy work. I should probably sit down and compare the wordiness of this with Kirkman's writing, espeically in The Walking Dead, but now's not the time. Somehow it seems more orgainc with Kirkman. That could be because Kirkman isn't striving for a stylized, futuristic tale with a sort of jazz age meets Blade Runner thing, instead telling a story of normal people from our time in an abnormal setting. Or it could be Kirkman's just a better writer.
Where Kirkman takes his time in developing many plot threads over many years, Chaykin is compressing a lot of elements into a limited space. There was only one other Time2 sto 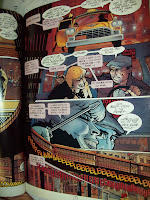 ry published, which I did not buy. Despite all the illusion of motion in this story, there's not a lot that actually happens. A guy dies. Another guy shows up to be his executor and to suss out who killed his friend. The obvious suspect that is the widow is in fact the person behind the killing. The dead guy returns, none the worse for wear and to no one's surprise. Chaykin tries to make it seem like something of a surprise because the dead guy is said to have always avoided robots, but really, how surprising can it be with all the efforts at immortality peppered throughout the book? What purpose did the cop being a demon serve? For that matter, what purpose did any of the demon aspects of the story serve?
This was the end of my buying books for the art. I did give Chaykin another run with American Century, which was much better, but I had seen some reliable comments on the writing before I got into that.
Posted by Thomm at Sunday, September 19, 2010