Lee: Another month, more indie picks! Yahooooooo. I love this time of the month.
Gwen: Reviewing the Indy solicitations is still new to me and I'm having a lot of fun with it so far! 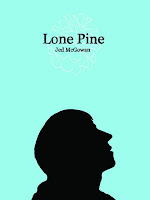 Adhouse Books
Lone Pine GN by (W/A) Jed McGowan
A distraught man retreats to the woods with a simple question on his mind: why did his last relationship end? He's soon deep in a world of cryptic messages, shadowy figures, guns and philosophical crisis. A page-turning mystery told with exciting formal invention, Lone Pine is Jed McGowan's debut graphic novel and a 2010 Xeric winner. $15.00 Visit Jed here and read a preview. IMPORTANT, after the preview, scroll down and you can see pics of the book hot of the presses. It’s really cool if you’ve never seen a comic get printed.
Lee: Only people with talent win Xeric’s! That said, this is an easy choice if you are looking for something new and different. The preview is excellent and really shows McGowan talent as an artist.
Gwen: While interesting this solicitation doesn't really capture my fancy. I'd have to know someone who read it a recommended it based to the previews so far.

Amaze Ink/Slave Labor Graphics
Elmer GN by (W/A) Gerry Alanguilan
Elmer opens a window into a world where chickens have suddenly acquired the intelligence and consciousness of humans, where they can now consider themselves a race no different than browns, black, or whites. Recognizing themselves to be sentient, the inexplicably evolved chickens push to attain rights for themselves as the newest members of the human race. $12.95. Go here to Alanguilan’s see portfolio.
Lee: This sounds like Wells' Animal Farm without the war like overtones. The are looks great and this sounds like a great concept. I'm sold.
Gwen: Evolved chickens! Now this looks like fun :)

Archaia Entertainment LLC
Cyclops #1 by (W) Matz (A) Luc Jacamon
2054. Douglas Pistoia is desperately looking for work, but only a private military contracting firm, Multicorps Security, has offered him a job. Soon after he signs up, the UN decides to outsource its peacekeeping missions, and Multicorps wins the first bid, propelling Douglas into a war that is not his own-a highly sophisticated war broadcast worldwide by the soldiers themselves thanks to the micro-cameras in their helmets. They are called the Cyclops. Douglas plays the game, and slowly emerges as both a unit leader and a media celebrity, but how far will he go in exploring the boundaries between war and peacekeeping, news and entertainment? From the same creative team that brought you the Eisner Award-nominated crime noir The Killer comes this new look at war and the media in the near future! $3.95
Lee: I got as far as “from the creative team the brought you the killer” and I ordered me a copy. The Killer is so good that this became an order on site book.
Gwen: The Killer is a really good read and that alone make me interested in this book. And that's saying something for me as I usually avoid 'war' genre books.

Big If Comics
Pood #2 by (W/A) Jim Rugg, Joe Infumari, Sara Edward Corbett, Hans Rickheit, VariousFeaturing some of the brightest talents in alternative comics in a big, colorful broadsheet newspaper right out of the Golden Age of Sunday Comics - every page of pood #2, is loaded with imaginative cartooning, rich story-telling, and hilarious escapades! Every one of pood's 16 enormous pages is a big, beautiful work of art! $4.00 What luck, there’s a Pood blog you can visit here.
Lee: This sounds like the indie veresion of DC Wednesday Comics. Once again, this is an easy sell to me. I'm a huge art guy and these are some great artists working on an oversized sheet of paper. It's worth a look.
Gwen: Lee will have to let me know how it is as I am not sold on art appeal alone. While I did like Wednesday Comics I think it was a novelty in some ways and not something I need to see done again.

Boom! Studios
28 Days Later Vol. 02: Bend in the Road SC by (W) Michael Alan Nelson (A) Declan Shalvey, Marek Oleksicki (C) Tim Bradstreet
Finally Available! They are trapped among the Infected. They have no supplies. Most of their crew has been killed. Selena, Clint and Derrick must get to London, but will they make it? Selena knows how to survive, but that was when she was trying to get out of London. Now she's going back in. The saga continues in this epic, fan-favorite series! $12.99
Lee: I recently read all the 28 Days later books and this has become a heck of a series. This book is way under the radar but the latest trade is an easy way to get caught up. Much like Walking Dead, this is about people caught in a really bad situation and the things they do to survive.
Gwen: Wasn't this made into a horror film? I enjoy horror books to a point but I feel that I already read plenty of books in this genre so not much appeal here for me. 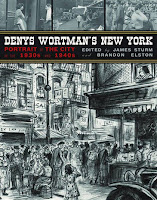 Drawn & Quarterly
Denys Wortman's New York SC by (W/A/C) Denys Wortman
A rescued archive of vintage New York from a forgotten master! After cartoonist, educator and editor James Sturm discovered the vintage book, Mopey Dick and the Duke, he set off to find more about the author, the deceased and unknown cartoonist Denys Wortman. Sturm immediately took note of the masterful drawings - casual, confident, and brimming with personality - and wondered how this cartoonist escaped his radar. After some online sleuthing, Sturm connected with Wortman's son, Denys Wortman VIII, who relayed that an archive of over 5,000 illustrations was literally sitting in his shed in dire need of rescuing. For over 35 years, the illustrations had been fighting such elements as hungry rodents, rusty paperclips and even a blizzard. Wortman VIIII also had drawers full of his father's correspondences including letters and holiday cards from William Steig and Walt Disney. Original artwork by artists and personal friends including Peggy Bacon, Milt Gross, Isabel Bishop, and Reginald Marsh were also saved. Considering that Wortman's luminary peers held him in the highest regard coupled with his artistic prowess, makes his absence from both fine art and comics history puzzling. So, Sturm and Brandon Elston set out to create a beautiful tribute to the forgotten master. Denys Wortman's New York is not only a tribute to Wortman, but it is a tribute to New York, the city that sparked Wortman's voracious creative output. From coal cellars to rooftops; from opera houses to boarding houses; Wortman recorded the sailors, dish-washers, con artists, entertainers, pushcart peddlers, construction workers, musicians, hobos, society matrons, young mothers, secretaries, and students who collectively make New York the city it is. $29.95. The Wortman site is here and some of his cartoons are here.
Lee: I’m always amazed by the things people find in their attic. Sheesh. If you like New York, or just enjoy history, then this is the book for you. It sounds very, very interesting.
Gwen: This does sound like it could be pretty cool. Although the 'Mopey Dick' thing kind of bothers me. I mean... it sounds really wrong.

Fantagraphics Books
Castle Waiting Vol. 02 HC by (W/A/C) Linda MedleyWith its second volume, Linda Medley's witty and sublimely drawn fantasy eases into a relaxed comedy of manners as Lady Jain settles into her new life in Castle Waiting. Unexpected visitors result in the discovery and exploration of a secret passageway, not to mention an epic bowling tournament. A quest for ladies' underpants, the identity of Pindar's father, the education of Simon, Rackham and Chess arguing about the manly arts, and an escape-prone goat are just a few of the elements in this delightful new volume. The book also includes many flashbacks that deepen the stories behind the characters, including Jain's earliest romantic entanglements and conflicts with her bratty older sisters, the horrific past of the enigmatic Dr. Fell, and more. $29.99
Lee: I loved the first Castle Waiting and I am sure I will love this too. This is probably the closest you will ever get to a guaranteed good read.
Gwen: OMG I have been waiting FOREVER for this book!!!!!! SQUEEEE! I LOVED the first volume so very much and I can't wait to get this book. *Jumps up and down with joy*