Image Comics
Yesterdays Tomorrows Vol. 01 SC by (W) Grant Morrison, Raymond Chandler & Tom Dehaven, John Freeman & Chris Reynolds (A/C) Rian Hughes
An eclectic and stylish collection of comics from rian hughes, renowned illustrator and graphic designer. Features infamous and hard-to-find collaborations with Eisner Award winner Grant Morrison: Dan Dare, a post-modern classic that sets the aging and retired iconic British character Dare against a modern British landscape he no longer understands; and Really and Truly, a high-octane psychedelic road-trip torn from the pages of cult comic 2000AD. Hughes' clean graphic style comes to the fore in duotone for The Science Service, written by John Freeman, while Hughes explores an evocative noir palette replete with dramatic angular lighting for Raymond Chandler's Goldfish, adapted by It's Superman author TOM Dehaven. In addition to sketchbook pages, merchandise and rare strips-many never seen before or out of print for over a decade-the book features an introduction by comics guru Paul Gravett, who published Hughes' very first strips in his seminal independent comics magazine Escape. Features: Grant Morrison Dan Dare Grant Morrison Really And Truly Tom Dehaven Raymond Chandlers Goldfish John Freeman The Science Service Chris Reynolds The Lighted Cities Dare is a work of simple and elegant beauty Time Out One of the most successful and prolific British illustrator-designers of the past twenty years -Roger Sabin, Eye Magazine It's definitely not the Dan Dare of old. Morrison completely deconstructs the character, using him as an iconic figure of a better past Dan Dare the brand still says patriotism, individual strength and the dream of a glittering modernist future -Richard Bruton, Forbidden Planet International Hughes has been credited with doing more than anyone else to elevate the sophistication level of comic book design. -Michael Dooley, AIGA Rian Hughes is a luminescent pop culture demon. -David Quantick (from the foreword) $24.99
Gwen: Just say no to Grant Morrison.
Lee: How can you say no to Grant Morrison??? With all the arguements about him being the greatest writer ever?! Anyway, this book is all about the art. It looks great and has some good writers attached. I'm always up for good art.

Kickstart Comics
Heavy Water HC by (W) Jonathan Mills (A) Alberto Muriel In an alternative future, where the Nazis won WWII, one man has the ability to travel back in time and change history for the better. His only hope is an old diary and an unreliable time machine. $14.99 Preview here.
Headache HC by (W) Lisa Joy (A) Jim Fern Eighteen year-old Sarah is the goddess Athena. Her evil stepmother? Hera, who's actually out to kill her. The bad boy she loves? Hades, king of the underworld. The philandering father whose approval she seeks? Zeus the ultimate deadbeat dad. And now she must take on all of the gods in order to stop them from destroying mankind. Edited by Jimmy Palmiotti. $14.99 Preview pages here.
Mirror Mirror HC by (W) Joshua Williamson (A) Lee

Moder The secret society the Huntsmen protected supernatural items from evil doers for centuries. Now some one is reuniting the shattered remains of the evil Magic Mirror of Snow White's fairy tale and killing Huntsmen. Owen, the twenty-something, playboy son of two murdered Huntsmen must stop the madman's plot. Cover by Darwyn Cooke. Edited by Jimmy Palmiotti. $14.99 Previews of Mirror Mirror here and visit Kickstart comics here.
Lee: I really hope this new company succeeds because I miss some of the older creators. Lee Moder and Jim Fern were some of my favourite artists back in the day. And, if the previews are any indication, they haven’t lost their touch. It’s an interesting decision to go straight to hc gn’s, too. I like it but I wonder how the overall market will receive it.
Gwen: Headache and Mirror Mirror look really cool but I'll pass on the alternate Nazi future one. 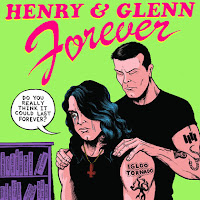 Microcosm Publishing
Henry and Glenn Forever GN by (W/A) Tom Neely Henry & Glenn Forever is the love story to end all love stories! Henry and Glenn are very good friends. They are also roommates. Daryl and John live next door. They are Satanists. What follows is ultra-metal violence, cryfest diary entries, cringing self-doubt, and mega-hilarious emo-meltdowns. Terrifyingly cute. Cutely terrifying. $6.00 Visit Nely here.
Lee: I have no clue what to make of this book. One on hand I find it absolutely hilarious that Glenn (Danzig) and Henry (Rollins) are friends in love. On the other hand I’m not sure I care enough about cute & cuddly emo meltdowns between men, no matter how funny it is. This is going to be a last minute decision because I like Neely’s art enough to splurge but I have to see it first.
Gwen: Ummmm.... pass. Although it looks like it could be painfully amusing. Like really awful movies.

NBM
Salvatore Vol. 01: Transports of Love GN by (W/A) Nicolas De Crecy
Best-selling creator De Crecy returns with a new series starring a dog auto repair mechanic so successful, he can afford to move his garage to a hard-to-reach peak for peace and privacy. Privacy to build transportation to carry him to his beloved far, far away. As unpredictable and original as Glacial Period, this Plymptonesque tale is filled with irresistible bittersweet humor. $14.99. See some previews here.
Lee: De Crecy's art is a visual tour de force. It is just excellent! His story, Glacial Period, was strange but good. You won't be sorry if you get this, but be warned it is very European.
Gwen: This looks very intriguing. Also, I don't see how you can go wrong with a canine mechanic. The art looks beautiful too. 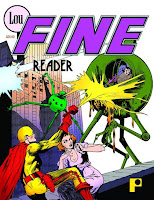 Pure Imagination Publishing
Lou Fine Reader Vol. 03 SC by (W) Various (A) Lou Fine
The final volume in the Lou Fine Reader series concludes with the rest of The Ray, Uncle Sam, The Black Condor, Dollman, and The Count of Monte Cristo, with 160 pages of classic art Theakstonized for maximum reproduction. $25.00
Lee: I swore I was going to stop buying these things but I can’t pass this one up. Lou Fine is one of the greatest artists of the Golden Age is this is the only way to see any of his art. Incredibly details and lush, it’s… it’s… just friggin’ amazing.
Gwen: The only appeal here to me is the Count of Monte Cristo but somehow I doubt it's the same Count Dumas wrote.

Radical Publishing
Last Days of American Crime SC by (W) Rick Remender (A) Greg Tocchini (C) Alex Maleev
NOW IN PAPERBACK! From Rick Remender, the critically acclaimed writer of Punisher. In the not-too-distant future, as a final response to terrorism and crime, the U.S. government plans in secret to broadcast a signal making it impossible for anyone to knowingly commit unlawful acts. To keep this from the public, the government creates a distraction, installing a new currency system using digital charge cards. Enter Graham Brick, a career criminal never quite able to hit the big score. In a grand scheme, Graham intends to steal one of the charging stations, skip the country and live off unlimited funds for the rest of his life. But the media has leaked news of the anti-crime signal one week before it was to go live... and now Graham and his team have just a few days to turn the crime of the century into the last crime in American history. $14.95
Lee: I try to use the indies previews to identify new books and exciting material. I try not to be negative because I really want the books I pick to succeed. But, every now and then I need to make an exception to the rule and this book is it. To say this book was bad is high praise. The art was muddy with characters that were indistinguishable from each other. The story was little more than a vehicle for pointless violence, rape, and nudity. Absolute pure drivel that made me feel dirty after I read it. I wouldn’t even wipe my ass with this book for fear of catching something. I like Radical Pub but they should be ashamed for printing this.
Gwen: Wow Lee... I don't think there's much I can follow up with to that....

Rebellion / 2000AD
Slaine: Warriors Dawn GN by (W) Pat Mills (A) Mike McMahon, Angie Kincaid, Massimo Belardinelli
Tir-Nan-Og, the Land of the Young. This violent world is home to warrior tribes who worship gods both benign and malevolent. The best of these warriors is a young member of the Sessair tribe named Slaine Mac Roth. Together with the repellent dwarf Ukko, Slaine wanders the land encountering many weird and sinister creatures. $17.99
Lee: I’ve been reading these Slaine reprints fort he last couple of years and they are great. It’s Conan as only the Brits could write him. Slaine is irreverent, full of sword and sorcery violence, and even some humor. This is highly recommended if you like swords and sorcery.
Gwen: Honestly I don't even need to read the solicitation. The cover here sold me. Done and done if I happen across this book at the store. I love that dinosaur face. 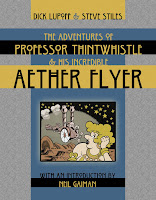 Wildside Press LLC
Adventures of Proffesor Thintwhistle: Incredible Aether Flyer GN by (W) Richard Lupoff (A) Steve Stiles
Featuring an introduction by Neil Gaiman, written in a delightful Victorian style by veteran sci-fi writer Richard Lupoff, and brought to sparkling life by cartoonist Steve Stiles, The Adventures of Professor Thintwhistle and His Incredible Aether Flyer is the merriest romp through space and time since Barbarella last donned - or doffed - her spacesuit! $14.99 Visit Steve Stiles here and see the unedited cover here.
Lee: This was originally written in the late 70’s/early 80’s and serialized in Heavy Metal. If that doesn’t define the subject matter, then nothing will. I liken it to high brow comix and I can’t wait to read it.
Gwen: The art doesn't really appeal to me but it still looks like something I might enjoy reading.


Lee: So, for all my excitment this month it has been tempered with an overwhelming number of omnibuses. Seriously, Battlechasers? But, Poop looks really good and so do many of the other books so it's still a win.
Gwen: I AM SO EXCITED FOR CASTLE WAITING VOLUME 2!!!! WHEEEEE!