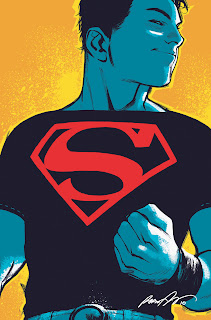 SUPERBOY #1
Written by Jeff Lemire Art by Pier Gallo
Cover by Rafael Albuquerque 1:10 Variant cover by John Cassaday
Superboy is back in a brand-new ongoing series! Join Jeff Lemire (Sweet Tooth) and amazing up-and-coming artist Pier Gallo as they take Superboy on a journey to a side of Smallville not even Superman knows about! What mysteries lurk beneath the surface of this all-American town – and what are their direct ties to Superboy? The start of the next great DC Universe epic begins right here! On sale 3 • 32 pg, FC, $2.99 US
Jim: This book intrigues me to no end. I like Jeff Lemire’s writing and I like Connor Kent. I’m just curious to see if a major indy writer can make the transition into mainstream super hero work.
Lee: If it weren’t for Jeff Lemire then this would be an easy pass. Lemire has done great things with non-cape characters. I hope that he succeeds and it will be fun to watch the transition.
Gwen: See? Another Superman book. Conner has really grown on me as a character and I look forward to more stories with him. 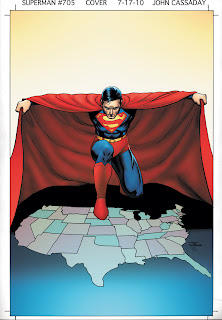 SUPERMAN #705
Written by J. Michael Straczynski Art by Eddy Barrows & J.P. Mayer
Cover by John Cassaday 1:10 Variant cover by Yanick Paquette & Michel Lacombe
“Grounded” part 5 brings The Man of Steel to Des Moines, Iowa! A chance encounter, however, suddenly thrusts Superman back in time. So somehow he’s Superboy again, the world is on the brink of nuclear Armageddon, and it’s all his fault! On sale 10 • 32 pg, FC $2.99 US
Jim: Could this get any worse? Now he magically reverts to being Superboy and is involved in the Cold War. This should have been a mini-series, but the time this hits the stands I may have dropped the book.
Lee: What are you complaining about? Straczynski is exploring all aspects of the Superman myths and telling a silverage Superboy story. I think your dislike of the entire concept is coloring your judgement of the storyline.
Gwen: While the Superboy story sounds lame I have to disagree with Jim about the Grounded storyline - I've been loving it and think that it's really helped to redefine some of the more important aspects of Superman. I thought the kickoff was dumb, but the small stories we've been getting as a result have really been great for getting the Superman character back to basics. 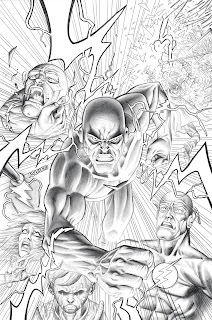 THE FLASH #8
Written by Geoff Johns Art & cover by Scott Kolins
1:10 Variant cover by Stanley “Artgerm” Lau“
Reverse Flash Rebirth!” In this FLASHPOINT prelude, don’t miss the epic telling of the origin of Barry Allen's greatest foe, Professor Zoom! Eobard Thawne's story is just beginning — and he intends to finish it with The Flash! On sale 24 • 32 pg, FC, $2.99 US
Jim: Flashpoint Prelude, Flash needed another year before they tried giving him an event, he hasn’t built up enough of a story yet to go event on us.
Lee: Didn’t Johns tell Professor Zoom’s story back in the last Flash series? Or is this the Barry Allen Professor Zoom not to be confused with the Wally West Professor Zoom. Maybe it’s all the same person from different time periods? But that begs the question who’s zooming who?
Gwen: Ugh, more redone origins. I could care less. They need to spend more time on plain old Flash as a Keystone superhero stories. I've enjoyed the future rogues story so far. 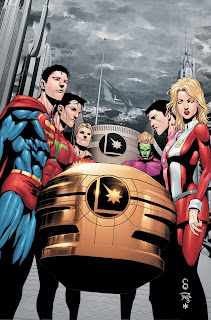 ADVENTURE COMICS #520
Written by Paul Levitz Co-feature written by Jeff LemireArt by Kevin Sharpe & Marlo Alquiza Co-feature art by Mahmud Asrar & John Dell Cover by Scott Clark & David Beaty
In the final issue of the first arc of “Superboy and the Legion: The Early Years,” for the first time – a Legionnaire dies! Learn how the consequences surrounding this brutal moment still affect the Legion today! Also, in The Atom second feature, Ray Palmer must protect his stash of white dwarf matter from the Colony! On sale 3 • 40 pg, FC, $3.99 US
Jim: I can only hope they are carrying Levitz in that coffin.
Lee: I can’t believe you picked this because the less said about this arc the better.
Gwen: It's sad but I could care less. 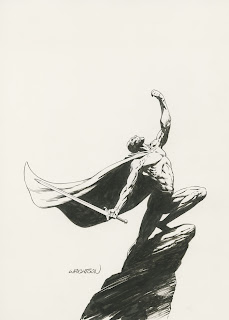 NIGHTMASTER: MONSTERS OF ROCK #1
Written by Adam Beechen Art by Kieron Dwyer Cover by Bernie Wrightson
The Shadowpact has been kidnapped by an evil wizard, and it’s up to former rock-god Jim Rook, the Nightmaster, to save them. No big deal, really, but a far more horrifying threat looms: the world’s biggest Jim Rook fan is following him around, and this dirty old hippie just...won’t...shut...UP! ONE-SHOT • On sale NOVEMBER 17 • 32 pg, FC $2.99 US
Jim: So last month, random Ragman comic and now a Nightmaster comic, I guess DC is doing Shadowpact as a series of one shots of each member.
Lee: I had that exact same thought. Maybe they’re bringing the series back… which would be cool because I really enjoyed it.
Gwen: Shadowpact was a lot of fun so it's nice to get these one-shots. 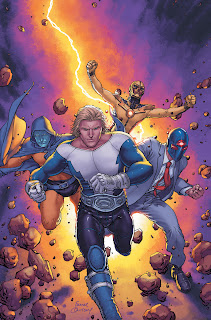 T.H.U.N.D.E.R. AGENTS #1
Written by Nick Spencer Art by Cafu & Bit
Cover by Frank Quitely 1:10 Variant cover by Darwyn Cooke
Would you rather burn out or fade away? That’s the question at the heart of this bold new series about a group of people who, for one reason or another, are at their wits’ end until they’re offered a chance to become superheroes. The catch? Their powers will kill them.Writer Nick Spencer (Morning Glories) and artist CAFU (WAR OF THE SUPERMEN) present a fresh take on the classic comics property, starring a new batch of recruits brought in to take over the original agents’ mantles and make some difficult choices of their own – all while dealing with global threats the rest of the DCU doesn’t even know exist! On sale 10 • 40 pg, FC $3 .99 US
Jim: Rising star from Image, Nick Spencer, is being given a chance with trying to revive the Thunder Agents. This will be a tough sell, but I like the old Thunder Agents so I hope it succeeds.
Lee: I like the TA too but they’re like the Mighty Crusaders, destined to failure. This is the third or fourth reboot for these heroes without success, so as much as I hate to say it, I predict failure for this too.
Gwen: I had no idea what Thunder Agents was so I can't say this has a whole lot of appeal. I'm willing to give most things a chance though. 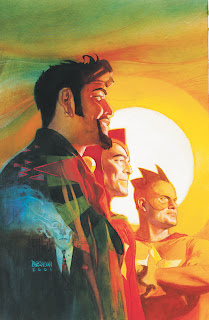 STARMAN OMNIBUS VOL. 6 HC
Written by James Robinson Art by Peter Snejbjerg and others Cover by Tony Harris
In this final STARMAN OMNIBUS hardcover featuring issues #61-81 of the classic series, Jack Knight’s worst nightmare becomes reality, as Opal City burns to the ground and chaos ensues, with hundreds of villains seizing the chance to strike. Then, after a meeting with Superman and a last talk with his brother David, Jack must uncover the mystery of the Starman of 1951 — by going back in time to meet him face to- face! On sale JANUARY 19 • 544 pg, FC, $49.99 US
Jim: I’m very happy to have this series all collected in a nice hard cover series. I wish James Robinson was still producing stuff of this quality as lately his stuff has been crap.
Lee: This was one of the great series of the 90’s and should be on everyone’s must read list. I’m excited to go back and read the whole thing again.
Gwen: I got the trades thanks to these hardcovers! 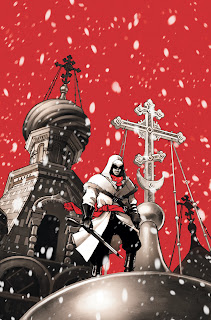 ASSASSIN’S CREED: THE FALL #1
Written, Art & cover by Karl Kerschl & Cameron Stewart
The monster-hit, historical fantasy/sci-fi Assassin’s Creed video game from Ubisoft breaks into comics with a stunning 3-issue series written and illustrated by acclaimed creators Karl Kerschl and Cameron Stewart. ASSASSIN’S CREED: THE FALL follows 19th century Russian assassin Nikolai Orelov as he strives to claim an artifact of immense power from the hands of the Templars, leading to a climactic and violent showdown with the ruthless Tsar Alexander III aboard a speeding train! Meanwhile, in modern times, a troubled young drifter copes with unsettling visions of a possible past life – visions that have irreversible consequences for the present. 1 of 3 • 32 pg, FC $3.99 US
Jim: I’m not getting this book, but it is tying up talent I’d rather see on books I would want to read.
Lee: Tying up who? Stewart isn’t on any regular books so it’s not like you’re missing anything. If you like the creators then there is a better than average chance you will like the story. Just because the source is a video game doesn’t automatically make it bad.
Gwen: While I've heard this is a good video game I maintain that video game stories don't translate well to other media. 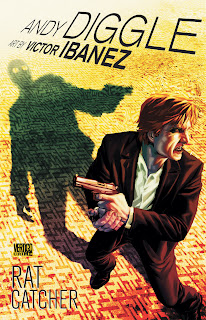 RAT CATCHER
Written by Andy Diggle Art by Victor Ibañez Cover by Lee Bermejo
According to underworld legend, the Rat Catcher is a peerless assassin who specializes in silencing mob snitches. There’s just one problem – he doesn’t exist. At least, not according to the U.S. Marshals who oversee the Witness Protection Program...Now there’s a pile of dead bodies in a burning safe house outside El Paso. The Rat Catcher has finally slipped up, and a washed-up FBI agent has one last chance to hunt him down before he disappears forever. But as the two master manhunters spiral in towards each other in a deadly game of cat-and-mouse, each of them hides a secret from the other – secrets that could destroy them both. On sale JANUARY 19 • 192 pg, B&W, 5.5” x 8”, $19.99 US
Jim: I’m glad to see Vertigo is still going forward with this series. Not everyone has been a winner, but they have all been entertaining.
Lee: I don't think this line has been an overwhelming success so it's good to see that DC is still making a go of it. This one should be good because Diggle excels at these kinds of stories.
Gwen: This sounds like it would make a fun movie oddly enough. 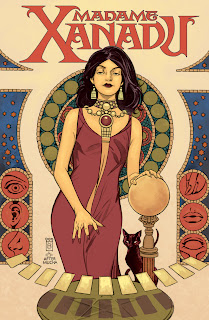 MADAME XANADU #29
Written by Matt Wagner Art by Amy Reeder & Richard Friend
Cover by Mark Buckingham Eisner Award-nominated artist Amy Reeder returns for the amazing series finale! Set in the New York City of 1966, Madame Xanadu and her new protégé, Charlotte Blackwood, ponder what the future may hold. According to The Phantom Stranger, they stand on the edge of a new age – and the coming of a familiar team of heroes…FINAL ISSUE • On sale NOVEMBER 24 • 32 pg, FC, $2.99 US
Jim: I hate to see this series end, but at least we get Matt Wagner and Amy Reeder to do the last issue. I’d rather have a great 29 issues then keep it going and it become a mediocre book. Lee: A sign of a good series is when you aren’t ready for it to end, no matter how good the ending. This has been very good throughout it’s run. Maybe, with luck, it’ll get the fancy hc treatment.
Gwen: *cries* I will miss this series so very very much.

Jim: Wow, DC is betting a lot on the Bat. I mean I’m a huge Bat fan and I’m overwhelmed.
Lee: It's just market saturation to compete with all of Marvel's books. It's definitely getting crazy out there.
Gwen: I demand more Amy Reeder art. At least she'll be on Batwoman with the end of Madame Xanadu and she'll also be doing Supergirl covers.
Posted by Lee at Thursday, September 09, 2010