What I’m Getting Wednesday September 22

This is my last What I’m Getting column for this year. What about next year, you may ask, the answer is a TBD (to be determined). I started this blog over four years ago and then recruited Lee into it, next Gwen and we have added Thomm, Greg and Matthew to the mix also. I think the blog does great with these people and I’m a little burnt out on comics. Of course you won’t be rid of me that easily because when I handed the keys of the blog to Lee he asked me to still provide my weekly review column. I thought it over and liked the idea of still keeping a minimal hand with the blog.
At the end of this year I plan to evaluate my feelings and determine how I want to proceed from there. My real world job has been busy for a long time now and since that job pays I have to focus on that. Also I have been doing this blog and doing a webcast for Cosmic Comics at the same time. Add into that my general feeling that all the cape stuff on an endless treadmill and it is time I stepped back. I may show up on an occasional spotlight review, but I’m off this post, off the preview reviews and will try and leave doing any general commentaries alone also.
I hope the rest of the crew carry on in the fine fashion they have been and I hope some of the creators who have been in contact with me and asked me to do a review here and there continue to do so because that is the material I still get a kick out of. Sadly outside of the Batman stuff, which DC is about to kill with way too many books, the rest of the super hero stuff, is missing the boat. My viewpoint is well known and where I see no growth and stagnation even I can only continue reading it for so long. As an example of how I feel this week I finally dropped Justice League of America. I love the character Jade, but I can take the way this book has been written. 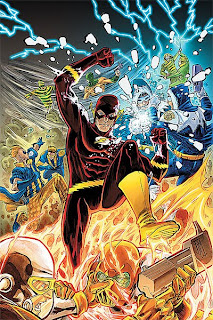 Heck Batman Streets of Gotham #16, Flash #5, Green Lantern Corps #52, Justice League Generation Lost #10, Legion of Super Heroes, Supergirl #56, Superman/Batman #76, Titans #27, Avengers Academy #4, Black Widow #6 and Secret Avengers #5 could all be books I can drop. The only reason Fantastic Four #583, Hulk #25 and Thor #615 are not on the same list is these titles I’m going to see if I want to follow again as we have new creative teams on Thor and Hulk and FF is promising to have a radical change in the status quo. Each one of the other books I have thought about dropping off my list. I keep some books on my list because I like to keep my hand in the comics’ scene. DC and Marvel are 75% of the market, so I keep my finger on the pulse of those universes by sometimes following series that are iffy. I continue to cut back on that stuff, so if I come back to this column in 2011 it may be greatly reduced. 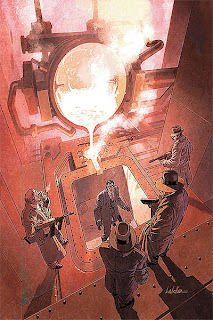 The others books are series I’m fine with, these include Spirit #6 (part of the First Wave world), Fables #98 and Walking Dead #77. The only other books I’m getting are Hit Monkey #3 (of 3) concluding this odd but enjoyable mini-series and Skullkickers #1 from Image because I like checking out new #1s from Image as they have had a hot hand lately with CNV, Chew and Morning Glories.
That is a wrap for this column and a wrap for doing this column for at least the rest of the year. I hope this column has entertained those of you who check in and I hope that you understand my need to step back a little.
Posted by Jim at Monday, September 20, 2010