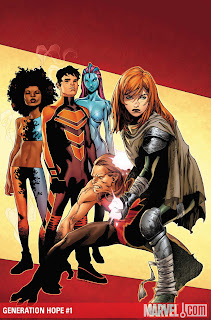 GENERATION HOPE #1
Written by Kieron Gillen Art by Salva Espin
Cover by Olivier Coipel Variant Covers by Greg Land, Marko Djurdjevic
Spinning directly out of Uncanny X-Men comes the most important new X-Book in years—Generation Hope! When Hope Summers returned from the future she triggered the rebirth of the mutant gene. Five lights appeared on Cerebra and five mutants’ powers came to life, but their activations have been chaotic and dangerous, nearly killing each of them. It was only the touch of Hope that saved their lives. With Rogue and the four new mutants who were gathered in Uncanny X-Men, Hope heads to Japan to join Cyclops, Wolverine and the fifth light. But will this new light be a hero or a villain? 40 PGS./ /8 page saga/ $3.99
Jim: So they did a sixteen part series to introduce Hope and spin her off into her own series by the team of Kieron Gillen and Salva Espin??? Gillen is suppose to be a decent writer and a darling of the 20 something because of Phonogram, but I have yet to be impressed and Espin is a total unknown. Marvel needs to focus talent into the X-books (and Fraction is not the answer for X-Men).
Lee: I’m not sure who designed the costume for the chick in the back… but it looks like she crapped her pants. Maybe it’s just pee but it looks questionable.
Greg: I've been warming to Fraction's X-Men lately (although it could use 100% less Portacio), but I tend to agree with Jim in that the line needs to be pared down. HOWEVER, this is the best creative team for an X-Book launch in a long, long, long time. Gillen did amazing work on Phonogram, and his SWORD and Thor work have shown just how versatile he is. Espin is a great up and coming artist. Buy this book. 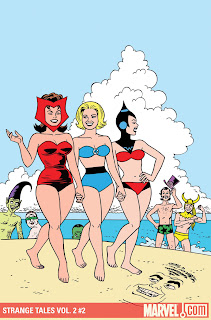 STRANGE TALES VOL. 2 #2 (of 3)
Written & Drawn by Gilbert Hernandez, Jaime Hernandez, Farel Dalrymple, David Heatley, Jon Vermilyea, Paul Maybury, Sheldon Vella, Tony Millionaire, Jeffrey Brown & Paul Hornschemeier
Cover by Jaime Hernandez
Lee: We hyped this book last month and we shall do so again this month because the cover is AWESOME! The cover is a perfect indication of the kind of stories you’ll find in this book. Excellent stuff.
Greg: More please.
Jim: I'd rather see these guys working on thier own stuff to tell you the truth. Still it is a nice idea and probably is getting these guys more exposure then ever before. 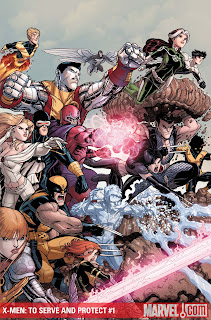 X-MEN: TO SERVE AND PROTECT #1 (of 4)
Written by Chris Yost, Joshua Hale Fialkov, & More
Penciled by Various Cover by Nick Bradshaw
We’re knee-deep in the Heroic Age and the X-Men are smack-dab in the center of the Marvel Universe! Chris Yost returns to the X-Books to tell a story that pits two fan-favorite X-Men up against a major Spider-Man villain in a four-part story that will run through each issue of this multi-story extravaganza! Who are these X-Men and why are they wearing disguises? Also in this issue, Fantomex and Batroc fight over a stolen diamond, and more! 40 PGS./ $3.99
Jim: Nice series to break in new writers to Marvel and give some artist work who are essentially trying out for real books, but I refuse to support this stuff.
Lee: Wasn’t Yost’s first run on the x books marred by inconsistency and killing (lots of it) of second tier characters? I’m not sure there’s any real reason to buy this unless you’re a X completist.
Greg: Gah, I hate anthologies. There's probably some good stuff in here, but you're either paying sight unseen or waiting for word of mouth. 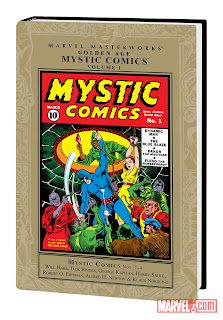 MARVEL MASTERWORKS: GOLDEN AGE MYSTIC COMICS VOL. 1 HC
Written ,Penciled by Various Cover by Alex Schomburg
Hot on the heels of the smash comic book hit of 1939, Marvel Comics, publisher Martin Goodman called up two companion titles to join his emerging comics line, post-haste. And now, for the first time in 70 years, the Marvel Masterworks bring the last of that trio of titles—Mystic Comics! Chock full of pulp-style men of action, hard-boiled gumshoes, mythical strongmen, undead avengers, and—of course—super heroes, Mystic Comics is a roller-coaster thrill ride back to the earliest days of comic books, when freewheeling writers and artists threw out wild ideas to a public with an insatiable appetite for comics. In this fully restored collection you’ll encounter comics first super-stretching hero—Flexo the Rubber Robot; the hero from beyond the grave—the Blue Blaze; the Dynamic Man, Master Mind Excello, the invisible Dr. Gade, Dakor the Magician, Zara of the Jungle, the Space Rangers, Hercules, the devil-possessed Black Widow, and more! Featuring an in-depth introduction by noted comics and pulp historian Will Murray, this volume is a priceless adventure into the Golden Age of comics! Collecting MYSTIC COMICS #1-4, 280 PGS./ $59.99
Jim: I know Lee still buys every Masterwork, but I gave that up at volume #100, plus now they are just publishing any stuff from the Golden Age. I have more than enough of this material and much of it was not worth restoring.
Lee: Guilty as charged! I still buy every Masterwork but this one is testing my limits. There isn’t anything spectacular in this book that needed reprinting. Heck, The Destroyer (Invaders version, not Thor version) doesn’t even show up until issue 6. There isn’t any real reason to own this… even though I will.
Greg: And Jim thinks $3.99 comics are bad. Yeesh. 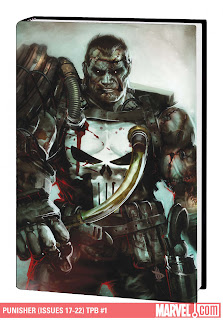 PUNISHER: FRANKEN-CASTLE HC
Written by Rick Remender With Daniel Way & Marjorie LiuP
enciled by John Romita Jr., Tony Moore, James Harren & Stephen Segovia
Cover By Dave Wilkins
Collecting Dark Reign: The List - Punisher, Punisher #11-16, Franken-Castle #17-21 and Dark Wolverine #88-89. 338 PGS./ $39.99
Jim: I dropped the book when it went Franken-Castle, but I’m getting the hard cover, Greg’s love for this stuff and my enjoyment of Remender’s Fear Agent is enough to make me get over the disrespect for the character by taking him here. Plus this is actually a fair price point for 13 issues of a comic.
Lee: This makes me laugh because I had the exact same thought. I’m glad I skipped the single issues, glad it’s over, but Mr. FFRRRAAANNNKKKEEENNNNCCCAAASSSTTLLLLEEE has sold me on it. After all the hype, it better be good.
Greg: Don't drink Jim's haterade you guys. This is completely mental, but its played completely straight and its totally in line with the character. Also, he uses the Man Thing as a projectile weapon. It might be the greatest thing man has ever committed to paper.

CAPTAIN AMERICA BY JACK KIRBY OMNIBUS HC
Written, Penciled, Cover by Jack Kirby
It’s Jack Kirby at his finest in some of the kookiest Cap stories of all-time! During the height of their partnership, Captain America and the Falcon face racism and government corruption with fists and shields raised! The deadly Secret Empire has infiltrated American society and plans to drive the entire country into war with their madness-inducing Madbomb! And amid battles with mutated men and armies with deadly weapons, has Cap found love? Featuring the threats of Arnim Zola and Agron! Collecting CAPTAIN AMERICA #193-214, CAPTAIN AMERICA ANNUAL #3-4 and CAPTAIN AMERICA'S BICENTENNIAL BATTLES.568 PGS./ $74.99
Lee: Honestly, I don’t want to spend the money but this is probably going to be the only way to get the material in a fancy hc version. The story is primo 70’s Kirby with wild ideas that are barely explored before moving on to the next even wilder idea. The dialogue is clunky but the art… oh la la the art. One look at these pages and you will understand why Kirby is so loved. This is one giant package of Bronze age Marvel goodness!
Greg: I know someone who looked and talked like Jack Kirby probably wasn't doing acid, but this stuff will make you think twice about that. A little rich for me right now, but when I think of Kirby, this is what I think of.
Jim: I have plently of Kirby in my collection that I do not need to have this included. Plus the Omnibuses are actually too large and almost unreadable due to their clunkiness. 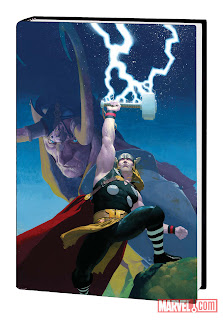 THOR & LOKI: BLOOD BROTHERS HC
Written by Rob Rodi Penciled & All-New Cover by Esad Ribic
There are two sides to every story. You’ve heard Thor’s -- now it’s time to hear Loki’s. Odin’s least favorite son rewrites Asgardian lore from his perspective, featuring the breathtaking painted artwork of Esad Ribic (Wolverine). In this story, Loki’s insatiable lust for power, his conflicted sentiments toward Sif, his antipathy toward Balder, and the deep-seated feelings of longing and resentment toward his older brother, Thor, and uncaring father, Odin, will take on new meaning. And if that’s not enough, just stare at the lush painted art by Ribic “you won’t be disappointed! This collection comes packed with extras including the original series pitch, cover sketches, character studies and more! Collecting Loki #1-4, Journey Into Mystery #85, THOR #12 and material from Journey Into Mystery #112. 152 PGS./ 24.99 Trim size: oversized
Lee: GAH! Marvel finally managed to screw me!!!! I have the original Loki hc and now this re-issue will SKEWER any value it once had. Thanks Marvel. But, for the rest of you, this is one fantastic read and has beautiful art. It’s well worth the investment if you don’t already have a copy.
Greg: I think Lee and I are the only ones who read this, but if you haven't check it out. Its seriously good stuff.
Jim: I hate when both of you love something, that causes me to think I may have to buy this.

Jim: Wow, so much Thor, Iron Man and Captain America that I think those three even outdo all the X-books. With the amount of material Marvel puts out DC can never win the number one battle, but on a per book basis they can win. Too bad neither of them thinks quality over quanity.
Lee: Yeah, Marvel is publishing too much Thor but Kirby Cap in hc is just too good to pass up. Awesome stuff.
Greg: As long as I get zombie Punisher killing dudes, all is forgiven Marvel.
Posted by Lee at Friday, September 17, 2010