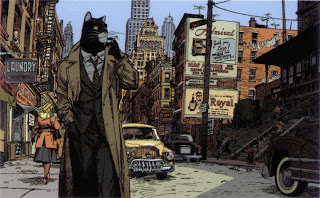 Blacksad is a graphic novel given to be by Jim originating with Lee. Before I go into reviewing the stories I want to say the art is absolutely gorgeous.

Part 1: Somewhere Within the Shadows

Out of the three stories in this book I both liked this one the best and thought it was the weakest of all the stories. To start, I liked it the best because this story was a pretty solid noir private eye type mystery story. I really have fun with these type of stories. I didn't even get into the noir genre until my fiance convinced me to watch The Maltese Falcon, but ever since then I've really had a good time reading private investigator stories. Somewhere Within the Shadows is basically a story about Blacksad, the 'hero' as it were, investigating the death of a former lover. His former flame was an actress and he has to follow a trail of love affairs that eventually leads him into trouble. The other thing I like about this story was the moral ambiguity of Blacksad's eventual solution to the case in regards to both Blacksad and his police detective friend. I felt that this was also the weakest of the three stories because of a continuing problem with this book in general. There are several places in the story where there is little to no transition from one plot twist to another. This story was the worse of the three in this regard as there is a major gap from when Blacksad is beaten to him being in jail. I took me a few times to understand what was happening and even then it was poorly explained.

I really liked this story for the ending more than anything else. While it also suffers from odd jumps in plot progression it has some surprising twists along the way. The story starts off as a kidnapping case in a town rife with racism. Blacksad, as a non white furred catman, has to deal with some of the artic snow themed racism as he tries to find a missing little girl. By the time you get to the end of this chapter the case has been transformed into a story of long term vengeance. I also really enjoyed the addition of the reporter character 'Weekly' - he was very endearing.

This story featured the red scare of the 50s with Blacksad becoming involved with a group of beatniks and communists through an old friend of his. This story also has a fairly serious romance between Blacksad on one of the writers involved with the "leftist intellectuals". My favorite part of the story was Blacksad saving his friend from an exploding car and then jumping into a fight with the bomber (who gets away) and then standing there all beaten up casually letting his cop friend know he's accepting a dinner invitation. I was pretty disappointed in the ending of this one though as Blacksad's love story was a bit pointless in the end.

Good story, amazing art... could have been great with a little more plot flow.
Posted by Gwen at Friday, September 03, 2010