Lee: This is a surprisingly light month from IDW. Light from a new book perspective that is. There is a new Secret Agent Corrigan hc, new King Aroo, and a bunch of cool ongoing stuff, but not much in the way of new-new.
Jim: True, true. But we are approaching the dog days of new series as November to February seem to be the lighter months for launching stuff.

Dungeons and Dragons #1 by (W) John Rogers (A) Andrea Di Vito (C) Tyler Walpole, Wayne Reynolds
Beginning a new era in Dungeons & Dragons history! The genre-defining roleplaying game gets its first ongoing series in more than 20 years! Join writer John Rogers (Blue Beetle) and artist Andrea Di Vito (Annihilation) as they bring us a tale of high adventure and deep secrets. Adric Fell leads a band of heroes in a world where civilization has been reduced to a few scattered points of light amid a rising tide of shadows. $3.99
Lee: I’m actually excited to see new D&D series in print. I’m not a huge D&D fan but it’s a good expansion of comics into related medium. And, it something other than capes and cowls. I know the DiVito is a good artist so I’ll check out the first issue at least.
Jim: A solid creative team is on this book, but I never got into D&D so will pass on this series. Is D&D still a big deal anymore? I know gaming itself took off and D&D was the grand daddy of all of the gaming stuff, but I'm curious if it still has a big following anymore.

Shockrockets HC by (W) Kurt Busiek (A & C) Stuart Immonen
Sixty years in the future, Earth is protected by the Shockrockets-an unbeatable squadron of hi-tech aircraft, built from a fusion of alien technology and the best Earth has to offer. Manned by the world's most elite pilots, the Shockrockets protect an unstable Earth as it rebuilds from a devastating invasion from space. Young, tech-mad Alejandro Cruz becomes the newest Shockrockets pilot by a freak of chance. Can he get up to speed before the Shockrockets' greatest foe takes over the world? $24.99
Lee: I remember reading this and really liking it. I also remember feeling disappointed when it ended that there wasn’t going to be any followup. It’s a good story but there isn’t a true conclusion and you aren’t going to get one.
Jim: Agreed. Love the series and thought it was well done, but I'm not picking up a $25 trade to still have no resolution to the story line. 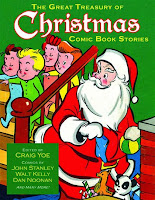 Great Treasury of Christmas Comic Book Stories HC by (W & A) Walt Kelly, John Stanley, Dan Noon, and more
These wonderful Christmas comics from the Golden Age of Comics will warm the hearts of children of all ages. Top cartoonists like Walt Pogo Kelly, John Little Lulu Stanley, Dan Noonan, and many more penned the funny, heartwarming comics in this beautiful collection. You'll meet elves, reindeer, talking snowmen and funny animals-and, of course, Santa Claus himself-in terrific stories that will provide a sense of wonder for kids, Moms, Dads, Uncles, and Aunts. $34.99
Lee: I have really enjoyed the recent wave of 50’s funny animal reprints. The stories have been humorous, the art has been great, and it exposed me to a whole new genre of comics that is largely forgotten these days. But this is a stretch even for me. The general funny animal stories always have an edge to them. But Christmas stories always seem to be more wholesome. Almost to wholesome to read in one sitting. If the kids were just a little younger I might, but for now it’s a pass.
Jim: Heck if Lee is passing on this stuff you know full well there is no way I'm sgning up for this book.

Wire Hangers Vol. 01 SC by Alan Robert (W & A)
Rocker Alan Robert of the legendary metal-crossover music group, Life of Agony, writes and illustrates this twisted horror/conspiracy series. Wire Hangers uses nightmarish visuals and graphic storytelling to depict a wave of abductions plaguing New York City. Pill-popping detectives, corrupt secret agents, and a mysterious, disfigured homeless man are all inter-connected in this horrific tale of revenge and redemption. $19.99 You can see a preview of the third issue here, all the way at the bottom of the page.
Lee: Normally I distrust when musicians try to write comic book stories but I am willing to give this one a chance. Mostly because Robert’s was in art school before becoming a musician and his art strongly reminds me of Ben Templesmith. Early Templesmith, but Templesmith none the less. I’m not expecting high art but this should be entertaining.
Jim: Wow every pick Lee made is a pass for me. That should not reflect on what I think of IDW as a whole as I love a ton of their material, just not these picks.

Lee: If there’s nothing that screams buy me, then I highly recommend the latest King Aroo hc from IDW. An excellent collection of the old newspaper daily and well worth the money.
Jim: Heck go out and buy the Bloom County collections they are producing on Locke & Key, GI Joe Cobra or The Ghoul, plenty of great IDW stuff for everyone.
Posted by Lee at Wednesday, September 29, 2010