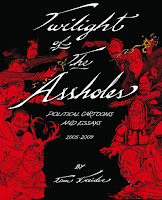 antagraphics Books
Twilight of the A-Holes GN by (W/A/C) Tim Kreider
Tim Kreider's first cartoon collection, The Pain-When Will It End? was one of the few bastions of sanity throughout the awful aberration in American history known as the Bush Administration. The end of his second volume of political cartoons, Why Do They Kill Me?, saw its author in despair over the 2004 election. In this new volume, Twilight of the Assholes, as reality gets ever bleaker, Kreider's humor becomes increasingly apocalyptic, deranged, and hilarious. He juxtaposes the Biblical Christ with His blonde, flag-draped, machine-gun-toting American incarnation in Jesus vs. Jeezus, proposes a third political party that represents Americans' real values in The Sex Party, draws the dead Saddam Hussein as a mischievous invisible imp still causing trouble, and envisions the officials of the Bush administration getting their comeuppance in the grisly fashion of Dick Tracy villains. And he finds two cartoons' worth of Reasons to Look Forward to the Next Terrorist Attack. Also included is his infamous entry into Iran's Holocaust cartoon contest, Silver Linings of the Holocaust. Kreider mocks not only the evil and hapless Bush, but the fecklessness of progressives, the imbecile bigotry of radical Islam, and, most of all, the dumb bovine complacency of the American voter. Twilight of the Assholes is an hysterical chronicle of the end of the Era of Darkness, and, believe it or not, a heartening document of one man's loss and tentative restoration of faith in democracy. $28.99. Visit Kreider’s site here.
Lee: Now that is how you write hype! Originally, I picked this book because I liked the title. But, after reading the hype I want to get the book. Political cartoons serve a place in American society and are often very, very humorous. This is going to be fun.
Gwen: While I enjoy the occasional political cartoon this is not the book for me - I think an entire collection would depress me.

Usagi Yojimbo HC (special edition) by Stan Sakai
7 x 10.25, HC, 1200 pages, Partial Color, Created in 1984, Stan Sakai's Usagi Yojimbo (2008 Eisner Nominee for Best Continuing Series) has vaulted to the forefront of iconic modern comics characters and is a perennial, favorite. Stuffed with engaging supporting characters, villains, and even a romantic interest or two, Usagi Yojimbo chronicles the action-packed wanderings of a masterless samurai in feudal Japan. For the first ten years of his career, the battling bunny was published by Fantagraphics. In honor of his 25th anniversary, Fantagraphics is releasing a deluxe slipcase set collecting the first seven Usagi Yojimbo books! With over 1000 pages of story and brimming with extra's (full color cover gallery! behind the scenes art! career-spanning interview! and more!), this is the complete! definitive! early Usagi Yojimbo! $100.00
Lee: This is an absolute killer. Usagi Yojimbo is one of the best comics on the stands these days. It’s been so good for so long that people have forgotten just how great it is. But $100 for two hc’s is a back breaker for me. It’s not a bad price considering the number of pages and extra’s but it’s priced so far beyond anything that even I can afford that I wonder who this is for. It’s too bad because at a cheaper price I bet a lot more people would buy it. The question has to be asked: who is this for? If it’s for the die hards who already know and love UY, then it appears to be a money grab. If it’s for the casual fan (me) then I got priced out of the market and probably won’t even enjoy this.
Gwen: While this may be good material I have to agree with Lee - waaay out of my price range and honestly way out of the price range of a lot of UY fans that I know. More than that it's not going to attract new fans at this rate.

HJ Kramer
Peaceful Warrior GN by (W) Dan Millman (A) Andrew Winegarner
Despite his success, college student and world-champion athlete Dan Millman is haunted by a feeling that something is missing from his life. Awakened one night by dark dreams, he wanders into an all-night gas station, meets an old man named Socrates, and his world is changed forever. Guided by this eccentric old warrior, Dan begins a spiritual odyssey into realms of light and shadow, romance and mystery, toward a final confrontation that will deliver or destroy him. $14.95 To get a much better idea of the book the gn is based upon; read the Amazon hype here. Lee: This is a very interesting book because I like it’s message (enjoy life). But, I think it’s hard to convey that message in a graphic format. I’m not saying it can’t be done, just it’s very hard to make it visually appealing without page after page of talking heads. Images of Winegarner’s art I could find on the web appeared to be several years old and very rough. I imagine he’s grown as an artist but I can’t be sure. I’m too much of an art guy to commit to this without a preview page or two, no matter how much the concept appeals.
Gwen: I can't say that this book appeals to me at all. Of course I'm unfamiliar with the premise to a certain extent but initially I'd have to pass on this. 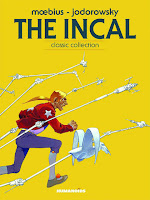 Humanoids Inc
Incal Classic Collection HC (deluxe) by (W) Alexandro Jorodowsky (A) Moebius
Detective John Difool is the key to the Universe after accidentally discovering the mystical Incal artifact. The international comic masterpiece by Moebius and Jodorowsky collected in an oversized hardcover with slipcase. Presented in its original colors for the first time by Humanoids! $99.95
Lee: And the reason I was priced out of Usagi Yojimbo was because of this book. As one of the absolute masterpieces of modern comic books, Incal deserves this type of treatment.
Gwen: Wow... this looks very very cool. It appeals to my inner-archaeologist (which lies sadly dormant while I work in auto insurance). But seriously, I cannot spend this kind of money on a book. Until I win the lottery or something.

Image Comics
Battle Chasers Anthology HC by (W/A/C) Joe Madureira
Collecting every issue ever published of one of the most beloved comic book series of all time, this over-sized graphic novel is bursting at the seams with adventure! Follow young Gully as she searches for her missing father with the help of Garrison, a legendary swordsman; Knolan, the crafty wizard; Calibretto, an outlawed Wargolem; and the notorious mercenary Red Monika! Assaulted at every turn by a cast of memorable villains, Battle Chasers is packed with over-the-top action from cover to cover! Don't miss this definitive collection, which includes never-before-seen sketches and new artwork, including a fold-out poster! Collects Battle Chasers #0-9 $100.00
Lee: This is getting ridiculous with the number of $100 books being solicited this month! But, this is the easiest pass I’ve ever seen. You can find the original books in the quarter bin at your local store but somehow Image. All you need to know is that the art is good and the story is atrocious.
Gwen: Lee, stop picking books no one can afford ><

Adventures Into Mindless Self Indulgence (One Shot) by (W) Jimmy Urine, Steve Righ?, Lyn-Z & Kitty art & cover Jess Fink
True tales of Horror and Insanity that will chill you right to the BONE. From Mindless Self Indulgence, the internationally acclaimed original electro-punk band, comes true never-before-told stories from the road. Thrill as rowdy fans throw junk at the band! Shiver as band members are hauled off to jail! Watch in awe as venues are trashed! Real stories, written and experienced by the band, with art by Jess Fink. $3.99 Visit the bands website here.
Lee: It seems that more and more musical type people are getting into the comic business. But, when your band is named “Mindless Self Indulgence” and your music is described as: Due to the style of their music lacking a definite genre, they coined the term 'Industrial Jungle Pussy Punk.' It’s fair to bet this will be excellent. Don’t give me that weepy, boo-hoo I miss my girlfriend crap, I wanna sh*t kicking, screw the man punk rock!!!! And I wanna hear about what goes on behind the scenes because I am sure it’s a complete disaster of epic proportions. I’m sold.
Gwen: This is this worst idea ever. I'm crying inside right now because somehow random musicians get their work published while there are really good writers out there who never get the time of day.

Madman Atomica HC by (W/A) Michael Allred
Madman Atomica! This is the big one! Hugemongous! The perfect companion to the now classic Madman Gargantua collection, this over-sized hard cover collection contains the complete Madman Atomic Comics series, The Atomics series, and the many now out-of-print one-shots, plus a huge pile of extras, pin-ups, and rarities! This classy tome will energize bookshelves and coffee tables the world over! Collects Madman Atomic Comics #1-18, The Atomics #1-16, Madman King-Sized Super Groovy Special, It Girl (One-Shot) & Mr. Gum (One Shot) $125.00
Lee: For me this is slightly above Battle Chasers in creator self indulgance. I realize that isn't a fair assessment because Allred is a good creator. And most of his stuff is good. But I cannot read this much Allred in one (or even two, three, or even twelve) sittings. Someone will love this.
Gwen: I never got into this stuff. I guess I just never saw the appeal but I've met quite a few people who liked this stuff. To each their own I guess.