Mata Hari – A Review of a Preview 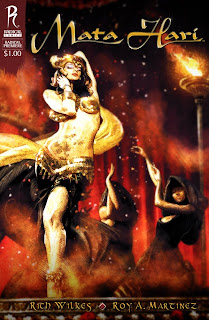 First things first, the OGN about Mata Hari looks to be a winner. Personally I can’t wait to read it. The book hits a lot of hot buttons for me and one of those is historical fiction. I enjoy learning about history and have no problem when half or more of it is fiction, especially when the writer is up front about it. Also outside of knowing the name Mata Hari and the fact that her name had become an adjective for a female spy I knew nothing about her. Thanks to the back matter in this book I know that her trial played an important role in World War I and that the records of her trail were sealed for 100 years. As long as the people who fear the Mayan calendar is a prediction of our world ending in 2012, in 2017we should see the records. Of course who knows the French government may seal them again.
As I was reading the preview I was getting a lesson about WWI. In the back matter the author Rich Wilkes opines that due to the devastation suffered by the French in WWI, they surrendered in WWII to avoid another bloodletting. In school when I learned history I was not consciously thinking that the history books are written by the winners and that I was not conscious of there being a viewpoint. While it is more self evident now back then it felt like history was a recitation of facts. It is enjoyable years later to learn again about history and have my own viewpoint to be able to look on it with a different light. The idea that we have always felt the French were “surrender monkeys” is certainly viewed in a different light when the horror of what WWI was is brought into full light. According to Wilkes 12,000 soldiers and civilians were dying daily during WWI. The number is staggering especially when you put it in sharp relief to the fact that in the total Iraq War we have lost less than that in the entire course of that conflict.
The story starts with a girl carry a head in a jar and ultimately moves to a story about a photographer back in WWI who is asked by a high ranking officer to accompany him to document his diplomatic tour. The photographer ends up going to a show being performed by Mati Hari and is immediately entranced by the exotic Middle Eastern beauty (but not really). In between we are given a good set-up to bring us back to the time of WWI and have some understanding of the context the story is to take place in. I’m intrigued already in Mata Hari’s story, the photographer and what is going to happen and I want to know how it all ties into a little girl walking around with a head in a jar in Russia in 1953. 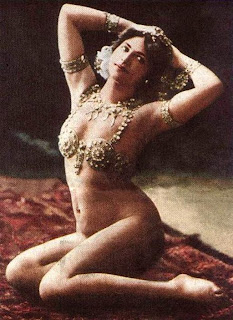 Rich Wilkes states that since all the records are sealed he is fictionalizing the story revolving around Mata Hari, but in the span of a few short pages and in reviewing the back matter Rich has 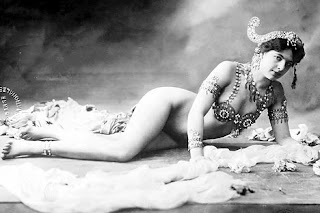 already gotten my interest in WWI to a fevered pitch as well as my interest in Mata Hari. Included in the back matter are some actual pictures of Mata and while I’m sure she was an exotic beauty for her day, based on modern tastes she was not a hot babe. Thankfully we have the artwork of Roy A Martinez to update her look and make her look as entrancing to our modern taste as I’m sure Mata was to the men of the early 20th Century.
This book feels like a labor of love for Wilkes and Roy Martinez has produced some excellent work before for Radical. I haven’t read anything but a short preview and the back matter, but I’m willing to say this will be a can’t miss book. I’ll be first in line when this book hits the stands in Spring 2011. It only cost $20 for 128 page full color hardcover graphic novel. That is a great price point when you realize it is a better bargain then a $4 22 page comic book.
Just a few thoughts about Radical itself, Radical was doing six issue mini-series and then collecting them into hardcover collection and trades, now they have moved to three issues oversized formats to produce the stories. The idea seems to be now moving to just doing them as OGN, which I think actually makes the most sense. The direct market is brutal to publishers like Radical and trying to get in the front door of the direct market is hard. The direct market works against startup companies because the store owners have to buy the product with no hope of returns. Therefore they are unwilling to gamble on an unknown. Going direct to an OGN allows a store to maybe order two and maybe take orders as a customer buys one leaving the other for the customers to peruse. Also this allows Radical to use channels like Amazon and such to put the books out direct to the public. The upfront cost is probably higher, but instead of producing a comic series that may or may not make it to trade status; they start with what should be an evergreen product.
Of course Radical has to push the envelope to get noticed so they need to up the ante with things like the digital market and what type of offering they are putting out. One of their hardcover collections I have is what I call a “golden book” style. The reference is children’s books from back in days or yore that was of substandard production quality. While Radical books are not that bad they are essentially glued binding reprints of what has come before.
In order to be different and get noticed Radical needs to release these hardcover collection or trades with upgrades. The back matter in this preview is an excellent addition letting us get into the head of the writer and have his passion for this project ignite our own. Also Radical needs to get Rich Wilkes out on every blog and interview show one to two months before the project hits to generate interest. This book needs to get into the hands of more than just comic book people as the market for this material to our group is a thin slice of a small pie.
The book should be realized as a digital version the same time it is released as a real book. A version for Kindle should be produced. The digital version should have the script attached to it as well as an audio file that allows someone to listen to the comic as the pages turn if they want to. It can have a commentary track by the creators, it can have creator interviews that can be read or listen to. Heck, why not add a file containing as many pictures and actual documented historical information on Mata Hari. The price point would theoretically be the same as the print version, maybe 25% less, but it needs all the bells and whistles to make the digital special. I would even go so far as to release the digital version with all the extras for $5 for the first 30 days to generate interest.
It is driving me crazy that companies are not taking advantage of what they have, but I think Radical is moving the right way and maybe they are the company to make digital be something special and not just a copy of a story you can lose easier than your print copy. Companies have to remember the print copies still have more advantages to most readers so the digital version needs to be extra special.
The bottom line is this looks to be a great project and one that could well garner interest outside the narrow market place of the direct market. For my money this book has already been an eye opener and I look forward to seeing the entire story soon. Each company takes some time to find their identity and the right mix that works for them. Radical I believe has found a great product with this story that could serve as a model on how they want to move forward.
Posted by Jim at Friday, September 10, 2010