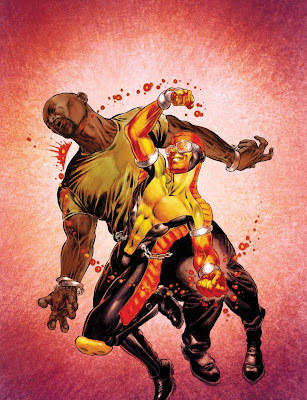 In the second issue of this mini series, the new Power Man, Victor Alvarez, faces Luke Cage, the original Power Man, and his old hero for hire partner, Iron Fist, alongside Cage’s old rogue’s gallery, which includes such luminaries as Mr. Fish, Spear, Comanche, and my personal favorite, Cockroach Hamilton.

This might not sound like anything more than your typical spin off of your typical summer crossover, but make no mistake: Shadowland: Power Man is one of the best superhero comics of 2010.

It takes the original concept of Luke Cage, a local superhero who is a hero for hire, and updates it for the 21st century. The characterization throughout the series has been outstanding. In only a few scenes, we learn to care about Victor and his family, while established characters like Cage and Iron Fist never threaten to overtake the book, but instead help build up Victor and his story.

The scenes with Victor and his family are involving. Cage’s old rogues gallery is hilarious (Particularly Spear’s introduction: “Spear! It’s who I am! It’s what I do! It’s what I use! SPEAR! NOUN! VERB! PROPER NAME!”). The fight is exciting. And the mysteries, like where Victor’s powers come from, are interesting without becoming tedious.

Honestly, the book is really everything that superhero books should be doing. Its fun, its about an interesting new character, and it uses continuity as a tool to enhance its story instead of a barrier to entry. It launches off the back of a major crossover, without making that crossover required reading and even better, with a half African American, half Dominican main character, it injects some much needed diversity into the Marvel Universe.

And its all enhanced by the wonderful art of Mahmud Asrar. Asrar does a great job on every aspect of the book, from the characters’ “acting” to the action in the fights. In addition to all that, his work on Power Man’s design has produced my favorite new superhero costume in ages. Going back to his days on Dynamo 5, Asrar has always been a talented artist, but his work on this series is by far the best, most polished work I’ve seen from him. 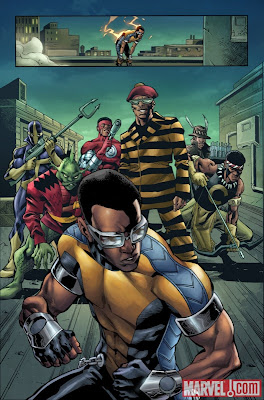 On Amazing Spider-Man, Incredible Hercules, and Action Philosophers, Fred Van Lente has been writing some of the best comics on the market for years, and this book is no exception.

Shadowland: Power Man is a fantastic mini series. This is how superhero comics in the 21st century should read. This is a book that is clearly testing the waters for a potential ongoing series and if there’s any justice in this world, Marvel will publish that series.

Don't let the crossover tag throw you off, if you like good, fun comics you should definitely give this book a shot.
Posted by Greg at Thursday, September 30, 2010