The 2010 Baltimore Comic-con in Pictures

I've been going to the Baltimore Comic-con annually since 2005 and this may have been the best year I've ever had. I'll try to write up some highlights and throw in a few pictures along the way. If you're looking for Cosplay photos of the costume contest participants, I'm afraid you'll be disappointed. (Lee you'll be upset, because of all the great deals you missed.) 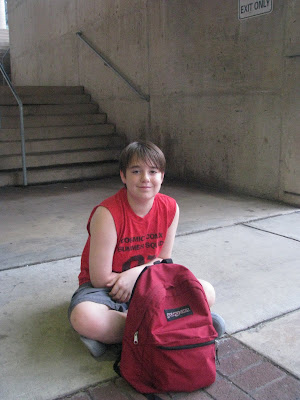 Day 1 -- My son and I got there around 6:30 am -- we only live about 1/2 hour south of the city. I found a new parking area where you put money in a slot with no attendant...only $10 -- A bargain (and only 3 blocks away)! We played Iron Man 2 game of War to pass the time and he tried to teach me to play Baukugan. Maybe, I'll win that Ford Fiesta sweepstakes they were having... 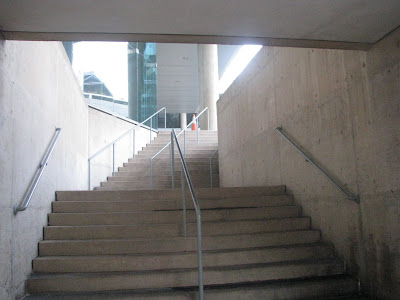 Our place in line was right next to these stairs. Too bad the REAL bathroom wouldn't be available to us for another 2 hours when they let us inside. Man did that place reek! 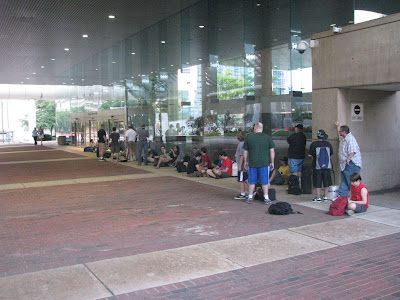 The early morning crowd. There really is no reason for me to get there that early, but I like to just the same. Plus it beats waiting in line for an hour to get in when you arrive at 10:00. 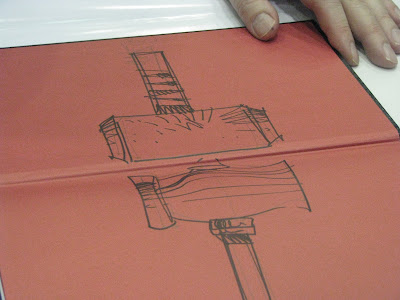 Skipping a lot of stuff (conversations and the like, including some of the Thor panel and selling some Spider-man comics) to one of the highlights -- my Walt Simonson sketch placed in the front of the Thor: Tales of Asgard HC (50% off). 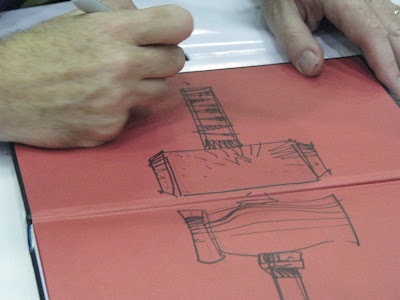 Walt at work. I wish I had audio of his talking. He's very approachable. I was number 5, which he sharpied on my thumb, in line for getting the last sketch of the day. 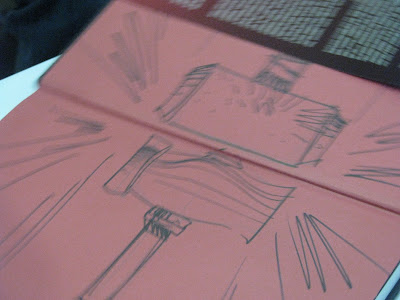 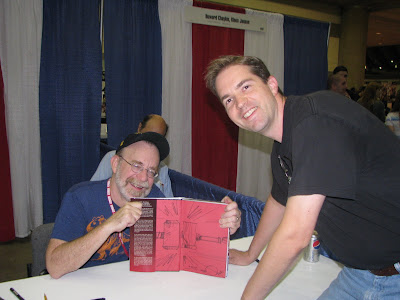 I've been trying to get a sketch from Walt since 2005!!! He said, it's a sure thing that no one else has that sketch. He seemed to like the idea. 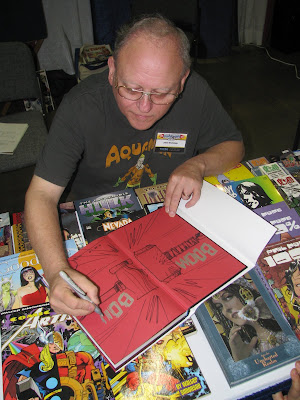 John Workman (letterer of Thor) was there this year (first-timer) and he graciously provided some sound effects. 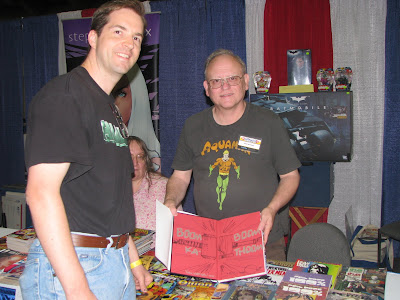 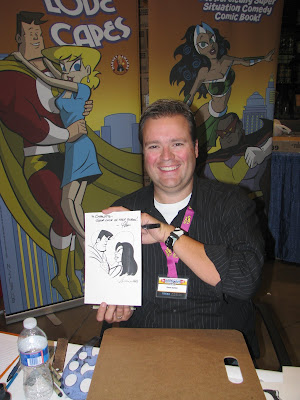 The always friendly Thom Zahler (Love and Capes), who did a sketch for my daughter who is starting high school tomorrow. I ordered his Long Distance script, which he didn't have with him this year. 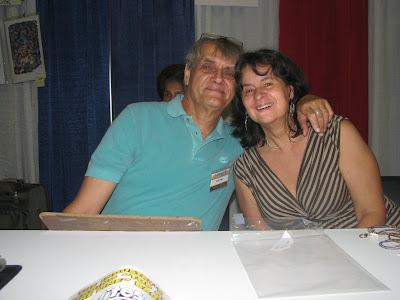 The legendary Herb Trimpe and his charming wife. Herb's going to ink a Hulk picture he drew for me in 2008. 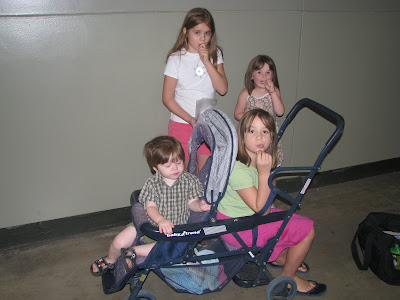 Eating lunch at the comic book diner with my four youngest children. 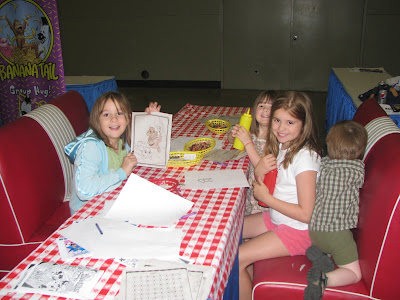 The kids drawing at the diner table. 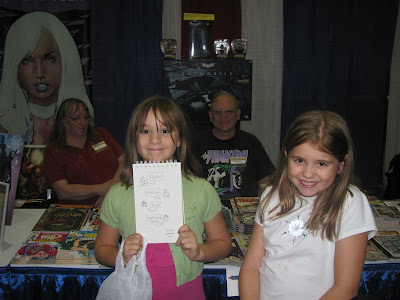 Head shot sketches with word balloons of each of the kids by John Workman. 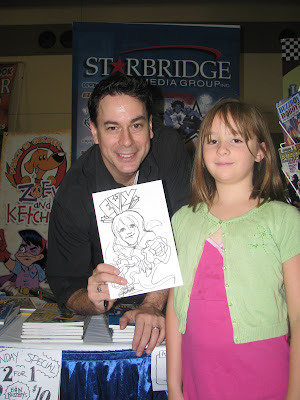 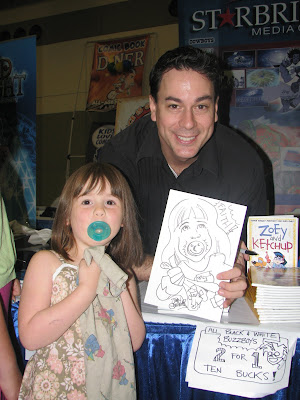 ...and Faith with a Super-Paci and blankie 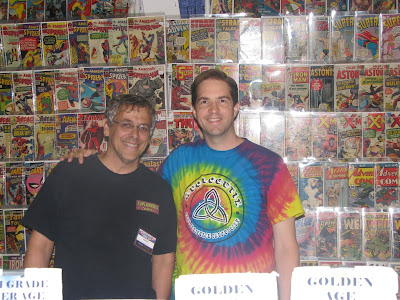 Ted Levine of Superworld Comics, my dealer and super nice guy. He's fair and straightforward and gave me a very good price on 11 Spider-mans (#13 thru 23), so I was able to get some things at the show such as... 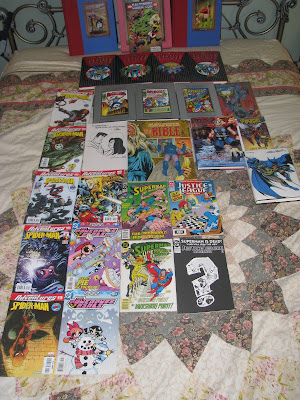 I was able to fill in some holes in my collection with a few dollar issues and 50 cent issues. I picked up the early part of Paul Tobin's Marvel Adventures Spider-man run (#53-57). I got the Neal Adams Batman Vol 2 HC for 75% off! I got the DC Bible Treasury edition for $5 and a Jack Kirby Darkseid DC direct figure for $5 too. I finally found the first issue of Robocop Vs. Terminator (a great series). 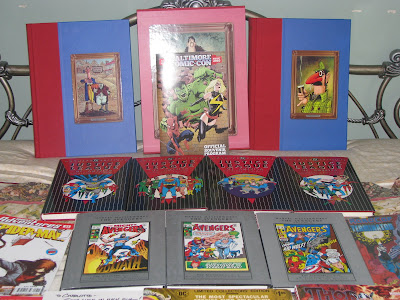 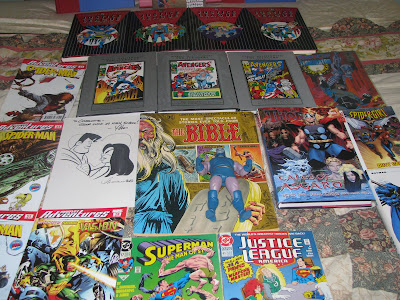 Detail of some of the books, including a Spider-Girl digest for only $1. 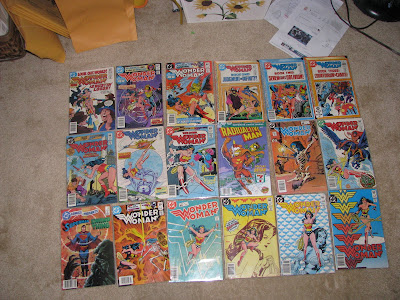 I almost forgot. I picked up nearly (missing only two issues) of the Gene Colan Wonder Woman run pre-Crisis for only a dollar each. I also got the Alan Moore Superman/Swamp Thing DC Presents issue. Speaking of DC presents I saw a guy buy a page from issue 41 from Jose Garcia-Lopez for only $150. I would love to get one from his Deadman mini-series. The most exciting back issue I found was the 7-11 exclusive Radioactive Man #711!!!