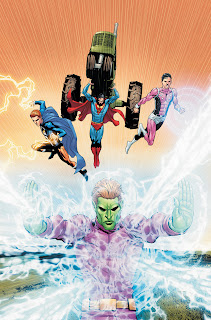 ADVENTURE COMICS #519
Written by PAUL LEVITZ
Co-feature written by JEFF LEMIRE
Art by KEVIN SHARPE & MARLO ALQUIZA
Co-feature art by MAHMUD ASRAR & JOHN DELL
Cover by SCOTT CLARK & DAVID BEATY
In the latest “Superboy and the Legion: The Early Years,” the Legion travels to the 20th century to visit Smallville rather than have Superboy head into the future. But what they find on the Kent farm is something that will haunt not only their own lives, but that of Superboy!
And in the second feature, the Colony’s attacks on the Atom get even more personal!
On sale OCTOBER 13 • 40 pg, FC, $3.99 US
Jim: Based on the last issue I read this should be called “The Retarded Years” as Levitz is failing on this book. It will be hard to fire your ex-boss, but I’m sure Didio will do it.
Lee: Ouch. No love from the oldest LSH fan I know is a sure fire sign of doom. See ya Paul, it was good knowing ya.
Gwen: UGH. This book is written for two year olds right now. What happened to good Legion stories? *cries* 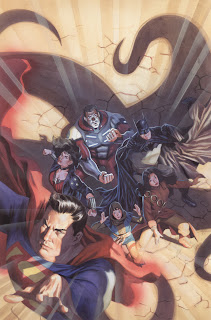 JLA/THE 99 #1
Written by STUART MOORE & FABIAN NICIEZA
Art by TOM DERENICK & DREW GERACI
Cover by FELIPE MASSAFERA
A threat from beyond the stars brings the World’s Greatest Heroes together with the World’s Newest Heroes to stop a globe-spanning invasion of Earth in this 6-issue miniseries! DC Comics’ JUSTICE LEAGUE OF AMERICA joins forces with Teshkeel Comics’ THE 99 to create an unstoppable army of super-powered beings the likes of which the world – and comic shops – have never seen before!
On sale OCTOBER 27 • 1 of 6 • 32 pg, FC $3.99 US
Jim: The 99 was very weak, I have no idea who thought this would be a good idea.
Lee: What was The 99? I don’t even remember that series.
Gwen: What’s the 99? Did I miss something?
Jim: The 99 is from another publishing company I read a little bit of it online mediocre stuff at best. 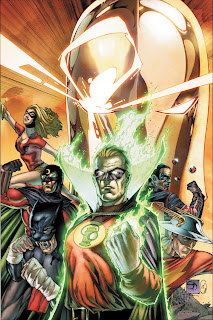 JUSTICE SOCIETY OF AMERICA #44
Written by MARC GUGGENHEIM
Art by SCOTT KOLINS
Cover by SHANE DAVIS & SANDRA HOPE
With this all-new creative team comes all-new terror! The United States is attacked by a lone mysterious warrior who’s escaped from a super-secret government holding tank! The Justice Society races to Washington, D.C. to neutralize the threat and find themselves at the heart of a catastrophe that will redefine justice, the society AND America!
Don’t miss this stunning start to the run from Marc Guggenheim (Amazing Spider-Man, Wolverine) and Scott Kolins (FLASH, SOLOMON GRUNDY) as they take on the new adventures of the JSA!
On sale OCTOBER 27 • 32 pg, FC, $2.99 US
Jim: Did Willingham leave or what. His stuff was okay, but slow paced. Of course Bill has signed up for other books and always falls off them as I think Fables and the ancillary stuff must consume most of his time.
Lee: This, like the Titans, is suffering from constant rebootitis. I just don’t care anymore.
Gwen: JSA can still be fun some issues but it really needs a consistent creator team to go anywhere - especially with such a large roster. 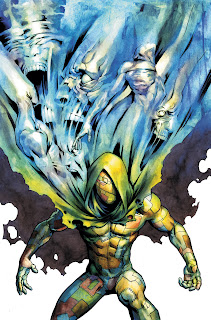 RAGMAN: SUIT OF SOULS #1
Written by CHRISTOS N. GAGE
Art by STEPHEN SEGOVIA
Cover by JESUS SAIZ
Rory Regan has long struggled to reconcile the burden he carries as the Ragman, protector of society’s forgotten, with his own strained faith.
Could the souls he has consigned to redeem themselves within his mystic suit have the answers he needs about what lies beyond — and about the mysteries kept from him by his own father? Christos Gage (STORMWATCH: PHD, Avengers: The Initiative) and Stephen Segovia (Wolverine) provide a look inside one of the DCU’s most peculiar Super Heroes in this standalone one-shot!
ONE-SHOT • On sale OCTOBER 20 • 32 pg, FC $3.99 US
Jim: Hey I like Ragman and I will buy this with Gage writing it, but why this book. It feels very random.
Lee: This is very random. A 32 pg one shot? About a C grade hero at best? There is no reason for this book. I wonder if DC is just releasing this to honor a commitment to Gage?
Gwen: Hey, Ragman is an interesting character. He can carry a one-shot. 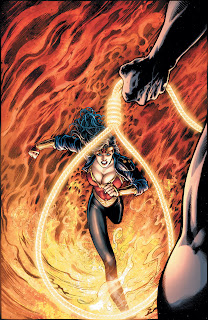 WONDER WOMAN #604
Written by J. MICHAEL STRACZYNSKI
Art and cover by DON KRAMER & MICHAEL BABINSKI
1:10 Variant cover by ALEX GARNER
This is it! The mysterious leader of the paramilitary organization finally confronts Wonder Woman as she continues learning what happened to the Amazons and why reality is askew! J. Michael Straczynski’s epic tale keeps rolling on!
Retailers please note: This issue will ship with two covers. Please see the Previews Order Form for more information.
On sale OCTOBER 27 • 32 pg, FC, $2.99 US
Jim: Check out the cover, she is going to tip over, the weight on her chest will not allow her to run that way.
Lee: Maybe… but if she fell over she probably would bounce right back up!
Gwen: Huge tracks of land... 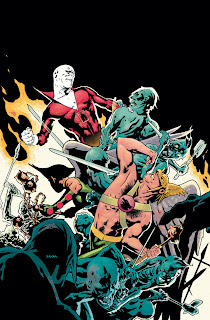 DC COMICS PRESENTS: BRIGHTEST DAY #1
Written by NEIL GAIMAN, ED BRUBAKER, JUSTIN GRAY, JIMMY PALMIOTTI, SCOTT KOLLINS and ARNOLD DRAKE
Art by CARMINE INFANTINO, TEDDY KRISTIANSEN, SCOTT KOLINS, JOE BENNETT, SEAN PHILLIPS and RYAN SOOK Cover by RYAN SOOK
Spotlighting Hawkman and Deadman – two of the characters who returned after BLACKEST NIGHT to usher in BRIGHTEST DAY to the DC Universe! This volume collects several hard-to-find stories including tales from HAWKMAN #27, 34 and 36, SOLO #8, DCU HOLIDAY ‘09 and STRANGE ADVENTURES #205. Everything from the first appearance of Deadman to a team-up between he and Hawkman can be found here!
On sale OCTOBER 13 • 96 pg, FC, $7.99 US
Jim: I have no clue why DC is doing a bunch of books reprinting almost random crap and charging $8 for them. It feels like a market test and/or something for the digital market.
Lee: But it is 96 pages. That’s basically a trade for less money. It is a good assortment of titles so that’s cool.
Gwen: This is.... a very eclectic assortment of books. I can’t say that I’m interested.