Life With Archie: The Married Life -- A Review 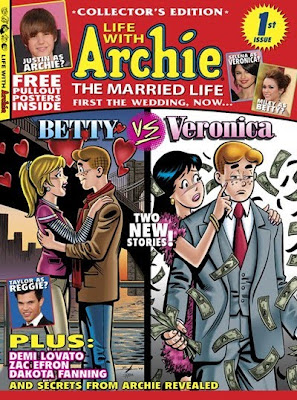 I’ve been waiting for this issue to come out for a very long time and it met ALL my expectations! It was FANTASTIC!!! Now, I was a little skeptical when I found out that it was actually going to be a magazine, instead of a comic book. But get this, it has two full 24 page stories with covers for each, plus extras to reach a whopping 64 pages at the larger magazine size and it’s only $3.99! Why on earth are monthly comic books by the Big Two so expensive?! I mean I would’ve paid $3.99 for each story, but don’t tell the people at Archie that. The hardest aspect to deal with are all those photos of the current TV/movie teen scene actors and actresses, where you can vote on who should be in an upcoming Archie movie or TV show. It comes across a bit like Seventeen or something. They obviously know what they’re doing though, because my three oldest girls (age 8, 10, and 13) were all super-anxious to get their hands on it. However, they had to wait for Daddy to read it first! I may even have to get an extra copy for them, because this one’s already getting a bit of loving wear.

Both stories are written my Michael Uslan (the writer of the wedding issues) and illustrated by Norm Breyfogle (from the old Batman comics), whose style adapts perfectly to the Archie characters. The stories take place soon after the actual weddings, so we already know that in about a year or so the kids will be born, but now we’re getting the details of what happened in-between.

In the Veronica storyline, both Archie and V are working for Mr. Lodge, but with one distinction – Veronica is Archie’s boss. Although, really they’re both peons to the ruthless Mr. Lodge, who demands that they get Pop Tate to sell his restaurant to them at a ridiculously low price, so it can be torn down for a parking garage. This conflicts with Jughead’s plan to buy the place himself and puts the friends at odds with each other.

There are a lot of relationship issues going on in this story. Midge has broken up with Moose and is starting something with Jughead. Moose is beginning to deal with his anger issues and meets a blind girl who really inspires him. We learn that Betty’s been unsuccessfully dating Archie-clones like Andy Hardy and Richie Cunningham. It really is a soap opera and that’s not a bad thing. We’ve got lots of characters, some realistic situations, plenty of drama, and best of all actions have real consequences.

In the Betty storyline, the newlyweds are still in New York City, where Betty is working for Sack’s 6th Avenue and Archie is struggling to make it as a musician. While the V story focused more on the supporting cast, this one is more centered on the couple themselves. Due to the poor economy Betty’s salary is cut ten-percent (versus getting laid off completely).

Things seem to be looking up for Archie as he’s about to play a sold out show. Surprisingly, there’s only one individual in the audience – Mr. Lodge! The miser tries to bribe Archie into divorcing Betty to marry Veronica instead, who has been miserable, since they’re wedding. (Veronica has no idea her father is doing this.) Archie emphatically refuses.

Later, Archie stops by a diner on the way home from the false “gig” and runs into his old pal Little Ambrose from his Little Archie days. After learning that Ambrose’s folks divorced and then his mother died, so that he had to be raised by his grandmother, Archie is feeling much less sorry for himself. This leads him to give Betty a really great kiss when he sees her at home.

Meanwhile back in Riverdale, Mr. Weatherbee proposes to Miss Grundy, who is suffering from some sort of terminal disease. Not that I really want to see her die, but it should make for some good storytelling as the series progresses. Additionally, Dilton Doiley disappears after discovering that there are parallel universes, such as “Archie’s New Look”, “Archie as Pureheart”, “Little Archie”, etc. So, you just know that these two “married” universes will intertwine someday.

The magazine ends with a nice interview with co-CEO, Jon Goldwater. It definitely seems like Archie is in position to really take the entertainment industry by storm! I wonder if you can buy stock in the company?

Grade A+: I LOVE IT!!! These are not your childhood Archie comics. They call it “LIFE” with Archie for a reason. These characters are actually growing up as they encounter “real” life issues and responsibilities. It’s also a super great value for your money. What are you waiting for, go out and get a copy. You’ll probably even see it in the grocery store checkout line.

It's a happy coincidence that this week I reviewed a "marriage" comic, as I get to be Best Man at the wedding of one of my groomsmen (back in 1992) and best friends tomorrow!
Posted by Matthew at Saturday, August 21, 2010