Last year Jim and I reviewed a book, ‘Old Man Winter’, by J.T. Yost. We both enjoyed it, so this year I picked up Yost’s latest offerings, Losers Weepers #1 & #2. 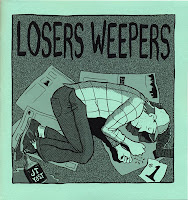 Losers Weepers #1 is the story of a recovering heroin addict, Sean, who accidently meets his ex girlfriend, Lupe, one day. In an attempt to be friendly, he invites her and her current boyfriend to see him perform at an open mic night. To say his performance is intersting is an understatement. When things don’t go as planned, he finds himself falling back into old habits. At the same time, seeing Sean brings all of Lupe’s anxieties to the surface. Suddenly she has to face old demons that she thought she had conquered. Losers Weepers #2 is the story of a single mother trying to raise her child in less than ideal circumstances.

Each issue of Losers Weepers is based upon random letters that Yost found in the street. For Losers Weepers #1, Yost found a notebook full of angst and a napkin with a partial rap lyric on it. He took these two discarded pieces of paper and wove them into one coherent story. 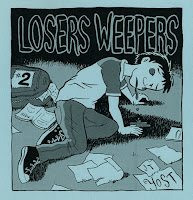 WOW! This is one of the best comic ideas I’ve heard of in a long time. It takes an incredible amount of talent to create a story based upon a scrap of paper found on a coffee table. Making interesting characters in the span of 40 pages at the same time is just amazing. The characters of Lupe and Sean present different sides of recovery. Lupe who’s made it out but constantly worries that he past will catch up with her is a direct contrast to Sean who can’t stay clean for a week. Sean provides the action to the story with his bad decisions, but it’s Lupe’s emotional battle that really makes this book worth reading. In issue #2, the mother’s struggle with simple everyday issues such as bills, raising children, and her own emotional tramau drives the tale to it’s ending.

And, in case you want to see the source material, Yost has included copies of the original scraps of paper that he found. Reading them is both interesting and depressing at the same time. I felt a certain amount of intrusion when I read the notebook that formed the basis for Lupe. But, it’s amazing to read what people are thinking.

Issue 1 and 2 don’t appear to be related but Yost states that there is a greater story at play. Based upon the strength of these books, I’ll stick around to see what else he develops.

Yost has been doing mini comics for years and self publishes through Bird Cage Bottom books and has plenty of books to offer. You can visit him here.

You can read our review of Old Man Winter here.