Jim: DC is killing me this month with all the bat-centric stuff. I’m a sucker for Batman material and this month I feel a little abused by DC.
Lee: What luck, I’ve been avoiding Bat stuff so I don’t feel abused! But, it does make me feel more like Greg and that just kinda makes me feel dirty.
Gwen: I can’t say I feel abused as Jim is the one paying for the comics I read. 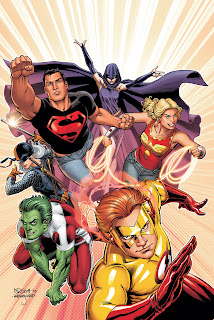 TEEN TITANS #88
Written by J.T. KRUL
Art and cover by NICOLA SCOTT & DOUG HAZLEWOOD
1:10 Variant cover by ADAM HUGHES
It’s here! A new day dawns for the Teen Titans, brought to you by the dynamic duo of J.T. Krul (GREEN ARROW, BLACKEST NIGHT: TITANS) and Nicola Scott (WONDER WOMAN, SECRET SIX)! Packed with action, steeped in emotion and featuring your favorite heroes, TEEN TITANS is ready to explode off the racks!
Starting right here, the team finds itself pushed in new directions and brought to new heights while also rediscovering its roots. With the rise of a mysterious new threat called the Feral Boys, Superboy, Wonder Girl, Kid Flash, Raven, Beast Boy and the newly returned Ravager will have the chance to rebuild their camaraderie in the face of all that might endanger it. But if they discover the truth behind the Feral Boys, will they be able to stand together to face it? Find out here as the new era of the Teen Titans begins in this perfect jumping-on-point issue!
On sale OCTOBER 27 • 40 pg, FC, $3.99 US
Jim: Well good luck DC with try number 12 in hoping to revamp this book back into the same monster it was when it was as big as the X-Men. I guess hope springs eternal and while Ms Scott is an excellent artist, JT Krul has yet to wow me with anything yet.
Lee: Yet another in series reboot just makes this look bad. And, I feel like the Ravager is being forced upon us. Does anyone really care about her?
Gwen: I like Ravenger - she’s an interesting character concept. At least this is an older roster as opposed to random characters I don’t know. I did like Blue Beetle on the team before though. 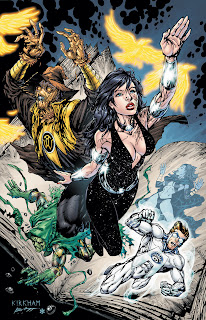 UNTOLD TALES OF BLACKEST NIGHT #1
Written by GEOFF JOHNS & PETER J. TOMASI, J.T. KRUL and ETHAN VAN SCIVER
Art by IVAN REIS, ETHAN VAN SCIVER, JAY FABOK and others
Cover by TYLER KIRKHAM & BATT
1:10 Variant cover by ETHAN VAN SCIVER
The Book of the Black is pried open once more to reveal the untold horrors that occurred during BLACKEST NIGHT as guided by Sinestro Corps member Lyssa Drak. Be witness as swarms of Black Rings scavenge for souls within the tatters of Ragman! Cringe as Scarecrow bathes in the fear he constructs as a newly minted Sinestro Corpsman! Scream as Donna Troy transforms into a Black Lantern! Squirm as Animal Man literally feels his world – and himself – die! It’s the emotional spectrum at its darkest in one special standalone issue!
ONE-SHOT • On sale OCTOBER 13 • 56 pg, FC $4.99 US
Jim: Okay there is always something wrong with milking a cow, but a dead cow or should I say this is beating a dead horse. Hasn’t this type of one shot been done to death.
Lee: Every month you complain about Deadpool overload but you’re not complaining about this. This is just a money grab.
Jim: Lee, re-read my comment I was complaining.
Gwen: Blackest Night was cool, but it’s over now. Let’s push on please. 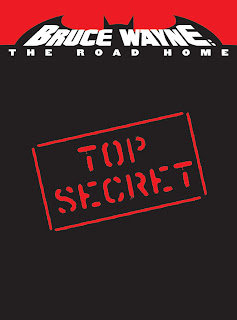 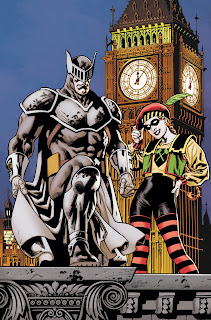 KNIGHT & SQUIRE #1
Written by PAUL CORNELL
Art by JIMMY BROXTON
Cover by YANICK PAQUETTE
1:10 Variant cover by BILLY TUCCI
Just as Gotham City has Batman and Robin, London has Knight and Squire – the British heroes and frequent allies of The Dark Knight! In a secret bar within the city where peace is kept magically, heroes and villains gather to enjoy a pint and talk about their day. But what happens when the magical barriers that disallow fighting are dropped and a building full of heroes and villains confront each other all at once? Knight and Squire have to keep the peace and save both friend and foe in this 6-issue miniseries from hot writer Paul Cornell (ACTION COMICS, Captain Britain and MI:13) and up-and-coming artist Jimmy Broxton (THE UNWRITTEN).
On sale OCTOBER 13 • 1 of 6 • 32 pg, FC $2.99 US
Jim: Greg was singing Paul Cornell’s praises when he was at Marvel and I have to say in one issue of Action the man has impressed me. Knight and Squire are so odd, but Cornell should be able to have fun with this mini-series.
Lee: I’m not sold. Cornell’s work with Marvel’s UK heroes was uneven at best. People rave about his stories but I don’t see it.
Gwen: Honestly this doesn’t look like a great concept. So far I have the feeling that this is about Knight and Squire stopping a super-powered bar brawl. 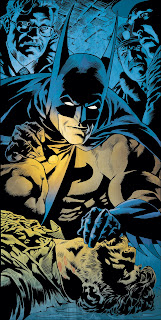 BATMAN: HIDDEN TREASURES #1
Written by RON MARZ and LEN WEIN
Art by BERNIE WRIGHTSON & KEVIN NOWLAN
Cover by BERNIE WRIGHTSON
At long last, the legendary “lost” Bernie Wrightson story starring The Dark Knight comes to life! Written by Ron Marz (GREEN LANTERN) and inked by Kevin Nowlan (SUPERMAN VS. ALIENS, Doctor Strange), this astonishing Batman/Solomon Grundy story features full-page illustrations on every page!
Also included in this can’t-miss issue is the newly colored, classic Bernie Wrightson/Len Wein Batman story “Night of the Bat,” which originally appeared in SWAMP THING #7! Both stories feature colors by acclaimed artist Alex Sinclair (BATMAN: HUSH, 52) and both present particularly startling looks at The Caped Crusader as only Wrightson could present!
On sale OCTOBER 6 • 56 pg, FC, $4.99 US
Jim: This seems cool. Apparently now that Levitz has stepped down there is stuff that was sitting around and rumored about for years that will now see the light of day. Wrightson and Batman make this an easy order.
Lee: It seems cool but I trusted Levitz to kill a bad book. I bet there is a very good reason this never saw the light of day.
Gwen: This could go either way. Honestly this solicitation doesn’t tell you much about what we’ll be getting outside of it being a Bernie Wrightson book. 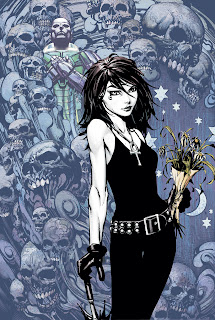 ACTION COMICS #894
Written by PAUL CORNELL
Co-feature written by NICK SPENCER
Art by PETE WOODS
Co-feature art by RB SILVA & DENIS FRIETAS
Cover by DAVID FINCH & BATT
Guest-starring Death from SANDMAN! Yes, you read that right! Death! From SANDMAN! In ACTION COMICS! Lex Luthor finds himself literally at Death’s door, which leads to a fascinating look not only into the mind of one of the all-time greatest villains, but also at what Death means in the DC Universe…
And in the JIMMY OLSEN co-feature, an alien race has chosen Metropolis to be the host of their millennial celebration! And who better to show them around town than James Bartholomew Olsen? But when the alien princess gets wasted and her brother starts picking bar fights, it’s up to Jimmy to get things under control before all of Metropolis is destroyed!
On sale OCTOBER 27 • 40 pg, FC $3.99 US
Jim: Speaking of Cornell, how cool is it that he asked Gaiman if he could use Death and Gaiman said yes, this book should be very good. Of course DC has to frell it up by making it $4 for a Jimmy Olsen back up – I thought they killed him! (I know it was all faked, but I was happy when I thought Jimmy was dead.)
Lee: I have to admit this is cool! Maybe Death can cross over with Deadpool next. Or better yet, FRANKENCASTLE!!!!
Gwen: Hey, Death being in the book is a selling point for me. Hopefully Cornell does her justice.
Continued in Part 2 tomorrow....................
Posted by Jim at Wednesday, August 11, 2010