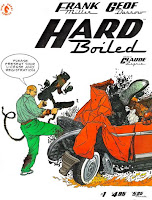 Frank Miller, though one of my favorite writers, is not an adherent to subtlety. Usually, though, he's subtle enough to include a plot and some story to his writing, but with Hard Boiled, he reached a nadir. Nothing but poke in the eye protest to this one.
Dark Horse produced this three issue book, which started in September 1990. It was oversized 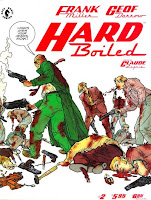 at about 8"x 10 1/2", and actually somewhat larger in the second two issues than the first. This was nice for the detailed artwork of Geof Darrow. Darrow put in Perez level details to this, so every extra inch of space helps the reader pick up on all that work. In fact, the main reason to have read this is for Darrow's work, much more so than Miller's story. Darrow has created a sort of art deco near future. The buildings are evocative of the 1920s architecture and the vehicles, so long as they're not oversized behemoths, are very much of the 1950s style, which matches very well with the '20s architecture. His human renderings are beautiful. The inclusion of sex scenes in the book, with all the oft hidden bits, is something like I'd like Invincible to do. They're appropriate for the book and done in feasible depictions (actual humans could manage these positions).

My only quibble with Darrow is one of cultural detail. In the second issue there's a scene in a subway that says "Way Out". This would be fine if the story were set in England, but it's set in LA. Should say "Exit", then.
Ah, but let's get to the fine story. I think I can summarize it pretty quickly. Robot/cyborg malfunctions, kills hundreds. Robot/cyborg is rebuilt and reintigrated into his "human" life. Other robot/cyborgs who have rebelled against their programming seek him out to free them. Evil corporation's programming holds and robot/cyborg remains loyal to his masters. "Free" robot/cyborgs die. 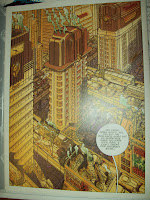 Now, what I think Miller's really going for is a parody of the excesses he sees in modern America, which he pushes to further excess to hammer home his point. The book is one endless flow of over the top sex and violence, mostly violence. Our lead is Nixon, surely not an accidental choice of name, who is a robot/cyborg whose function is to assassinate rivals of his corporate creator, an appliance company. He kills hundreds without repercussion. He has lovely sex with his "wife". His over the top violence spills over into a public orgy. I think I get it. America is in 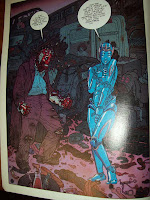 love with sex and violence. There seems to be some population explosion commentary, too, because LA is nothing but wall to wall people. All of this makes for dehumanization, as there's little concern for the countless dead. Just line up somemore, there's plenty left.
If that's all Miller hoped to achieve, it would have been nice if it could have been done in a reasonable time span. While it was 3 months between the first two issues, it was 15 months 'til the last. If you're going to do a 3 issue series, why not have all 3 issues ready to go as soon as the first one comes out? (Ok, it's 20 years gone now, so there's not much point in criticizing a publishing schedule that far out, but it's not like that sort of thing has improved in the intervening years.) 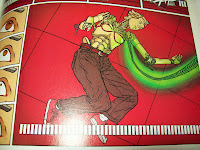 I also think the failings in story are detractions to the overall point Miller wanted to make (at least the one I think he wanted to make). There's never any explanation of why or how Nixon is going to free the other robot/cyborgs. Why's he necessary at all for their freedom? I understand why he kills the robot/cyborg that tries to seduce him, but I totally fail to understand why the other female robot/cyborg then kills herself when he doesn't overcome the programming. I think this is because her suicide is dependent on her pinning all of her hopes for freedom on Nixon, but because I have no idea why all h 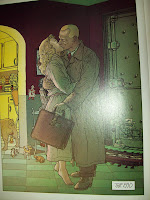 er hopes are linked to him, I have no understanding of her suicide. Miller manages to get across the despondency a reader should feel in Nixon's continuing slavery to his programming by his corporate masters, but loses the reader in the rather important details of Nixon's importance to others of his kind.
The story could have been condensed into a one shot issue. That, I think, would have left the plot shortcomings more understandable and acceptable. Making it three issues should have made for more development of the motivations, though. The payoff of the ironic final panel is undermined too much as it stands.
Posted by Thomm at Sunday, August 29, 2010