Lee: October is always a good comic month because everyone is releasing horror stories for Halloween. Since I love horror comics, this is like Christmas coming early.
Jim: I think horror comics is one of the hardest category to do right, becasue it is tough to make a printed page scary.
Gwen: I have infiltrated the world of Indy solicitations, mwhahaha!

Amulet Books
Hereville: How Mirka Got Her Sword HC by (W/A) Barry Deutch
Spunky eleven-year-old Mirka Herschberg isn't interested in knitting lessons from her stepmother or how-to-find-a-husband advice from her sister. There's only one thing she does want - to fight dragons! Granted, no dragons have been breathing fire around Hereville, the Orthodox Jewish community where she lives, but that doesn't stop her from honing her skills. She battles a very large, very menacing pig. And she boldly accepts a challenge from a mysterious witch, a challenge that could bring Mirka her heart's desire: a dragon-slaying sword! 139 pgs. $15.95 Visit the Hereville page… well, here and the webcomic here.
Lee:That’s what I love about comics, just when I think that every story has been done, we get one about a Orthodox Jewish girl fighting dragons. Gotta say, I would never have thought of that. Overall, this sounds like a fun tween type book.
Jim: Great for a tween, but not for me.
Gwen: Tween? I'd be interested in reading this! Seems like it could be a really cool story and seeing how I know at least Jim enjoyed I Kill Giants and Stuff of Legend this doesn't seem like too far of a stretch.

Beacon Press
Fist, Stick, Knife, Gun: Personal History of Violence GN by (W) Geoffrey Canada (A) Jamar Nicholas
Geoffrey Canada was a small and scared boy growing up in the South Bronx. His childhood world was one where sidewalk boys learned the codes of the block and were ranked through the rituals of fist, stick, knife, and, finally, gun. Acclaimed comics creator Jamar Nicholas transforms Canada's raw and riveting memoir as his fresh and edgy art connects with one of the most authentic and important true stories of urban violence ever told. 144 pgs. $14.00 The book that inspired the gn here. Visit Nicholas here.
Lee: Now this looks interesting. Nicholas has adapted the book of the same name for comics. An edgy look at urban life, I can’t wait to read this.
Jim: I don't know about this book, it could be good or could be very bad.
Gwen: I have yet to read a comic that was well adapted from a novel. The closest I've seen have been new stories about already existing novel characters written for comic books specifically. Or loose adaptations - the Logan's Run stuff was kind of fun. But I think it's hard to cross from a novel to a comic because there's a lot that ends up being left out.

Disney Press
Phineas & Ferb Early Comic Reader #3 (Hey Where's Perry) by (W) John Green
Spend some time with best friends and stepbrothers Phineas and Ferb and see just how outrageous a summer's day can really be! Thrill as Perry the Platypus faces his most dangerous nemesis yet - the rogue rabbit known only as Dennis! As Phineas and Ferb create their own X-Ray glasses, Agent P must bring the bad bunny to justice. And what happens when the boys wake up to find that Perry is gone forever? $4.99
Lee: Recently, we received a question about books for young readers. Well, if you are looking for comics for kids then this is the one you want. Kudos to Disney for putting out quality material.
Jim: I have not worried about this type of material since I was a retailer. Kudos for companies producing a lot more then they used to do.
Gwen: It does seem a lot easier to find kid friendly books outside of the big two.

D. E./Dynamite Entertainment
Warlord of Mars #1 by (W) Arvid Nelson (A) Stephen Sadowski
The original warrior of Mars returns from Dynamite! Warlord of Mars, an enhancement of the classic Edgar Rice Burroughs story, Princess of Mars! If you thought you knew the story, think again! This series will capture the grit and action of the original while expanding on it with new elements. The story is about John Carter, an ex-cavalry officer in the Confederate Army who finds himself mysteriously transported to Mars! Joining him in his adventures there are Tars Tarkas, his Martian comrade, and Dejah Thoris, a Martin Princess. This series is written by Arvid Nelson and is illustrated by Stephen (Avengers/Invaders) Sadowski and Lui Antonio, and features covers by Alex Ross, Joe Jusko, J. Scott Campbell and Lucio Parrillo! 32 pgs, FC, $1.00
Lee: I’m surprised it’s taken this long for JC to get back into print. I don’t think there has been a series since Marvel’s in 1970. Sadwski is a good artist, the story is a favourite of mine, and it’s only $1. I’m good for the first issue.
Jim: I'm more then good for the first issue. I love John Carter of Mars and just recently re-read the first triology. I have always loved this character and think he is far more interesting then Tarzan. I'm very happy to see a new comic series.
Gwen: YAY! I've been crying inside ever since the same group that made 'Mega Piranha' for the Sci-fi channel made a travesty of A Princess of Mars so it'd be great to see some hopefully better work from these stories. John Carter has always been one of my all time favorite characters :) Also, because of the amount of action in these stories it's a bit easier to cross medias with this material. 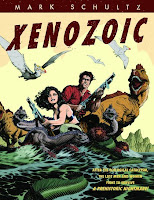 Flesk Publications
Xenozoic Complete Collection SC by (W/A) Mark Schultz
Forced into hiding by a global ecological cataclysm, humans emerge from their underground warrens half a millennium later to discover that the Earth has been totally transformed. The familiar flora and fauna are gone, replaced by a radically altered natural order populated by rampaging dinosaurs and strange, new creatures. It takes guts, grim determination, ingenuity and a whole lot of old-fashioned luck just to survive, much less thrive, in this alien wilderness. Xenozoic combines lush artwork with a pulp-fueled narrative to create an action-packed fantasy. 352 pgs. $39.95
Lee: I’m glad to see this in print but i have to ask who this is being published for. Seriously, Kitchen Sink did oversized hc’s in the 90’s. DH did standard size tpb’s in the 00’s. Is there anyone left who hasn’t read this? But, please note, if you haven’t read this, know that it is AWESOME and you should read it.
Jim: Never hurts to have a new compilation of solid material.
Gwen: DINOSAURS! You can never go wrong with dinosaurs!

Heavy Metal Magazine
Fluorescent Black GN by (w) MF Wilson (a) Nathan Fox, Jeromy Cox
Fluorescent Black takes readers into the hard-hitting dark future of South East Asia where gene-tech has divided the human race into two races, and both the utopian and dystopian futures exist in near proximity. Known for it provocative ideas and scientific accuracy, Fluorescent Black has been praised by biotechnology web rings and counter-culture magazines as a seminal bio-punk novel. A visceral ride through a bio-punk future where life is cheap and death is the only way out. 196 pgs. 12 3/4" x 9 1/2" $24.95 Visit Nathan Fox here.
Lee: Heavy Metal is known for extreme stories which is a plus for this type of material. Nathan Fox is an excellent artist much in the vein of Paul Pope so this is an easy sell for me. I like that it's oversized too.
Jim: I agree this sounds like a great book and the premise sounds too cool to pass up on.
Gwen: While this genre doesn't really appeal to me the cover is hypnotic.
Posted by Lee at Wednesday, August 25, 2010