Titan Publishing
Major Eazy Vol. 01 HC by (W) Alan Hebden (A) Carlos Ezquerra
From the pages of Battle, Britain's best-loved war comic! Major Eazy is a maverick soldier in a dirty war, caught up in the Allies' invasion of Italy in 1944 and determined to see justice done. Even when that means taking on villains on his own side, he doesn't pull any punches! More movie star than military, Eazy was the most laconic British officer ever to grace the pages of a comic. $19.95
Lee: I love old war stories but sometimes the ones in the US seem so sanitized. Well, the older ones at least. I'm interested to see how the British relive WW2 in comics. It doesn't hurt that Ezquerra is handling the art chores either.
Jim: I on the fence on this one, love war comics, love Ezquerra for this materialn but have no clue who the writer is.
Gwen: I don't like war comics. I guess I'm the girl on this one.

WWE Heroes Vol. 01: Rise of the Firstborn SC by (W) Keith Champagne (A) Andy Smith
Since the dawn of time the powers of good and evil have been locked in unending battle and the firstborn children of light and darkness have been reincarnated time and again. Now the Shadow King searches for the firstborn, his enemy, knowing only that he has been reborn as a member of the WWE. Uncertain who it is, the Shadow King attacks Wrestlemania! $14.95
Lee: DO YOU SMELL WHAT THE ROCK IS COOKIN’? Well, the quest is over. After 3+ yrs on the blog, I’ve been able to use my Rock quote. Life is good. But, this actually might be fun. Champagne and Smith are proven creators and the concept is so goofy that it can’t miss.
Jim: I guess the line is funny if you watch the WWE, but I have no clue what Lee's line is all about, but I do know this book will never be ordered by me.
Gwen: Ugh. I think I just gagged. Magazine
Alter Ego #97
We examine the other guys - the non-EC Horror Comics of the 1950s! From Menace and House of Mystery to The Thing!, we'll take an in-depth look at some classic horror gems, with vintage art and artifacts by Bill Everett, Dick Briefer, Steve Ditko, Joe Maneely, Gene Colan , Mort Meskin, Shelly Moldoff, Russ Heath, Bob Powell, Jack Cole, Simon & Kirby, Bob Fujitani, and others! $7.95
Lee: I get one issue of Alter Ego every year and this is it. If you have any interest in pre-code horror, or horror comics in general, then this is a must. It’s always great fun and informative.
Jim: I agree, but I'm not buying the book as I have so much of the material in my collection I'd rather just read it.
Gwen: The only horror comics I remember really enjoying (outside of more modern work like Walking Dead) are the old Tales of the Crypt books. I'm not sure I'd like these types of stories as much now that I'm older though. So many horror stories are predictable to me these days.

Books
75 Years of DC Comics HC by (W) Paul Levitz
In 1935, DC Comics founder Major Malcolm Wheeler-Nicholson published New Fun #1, the first comic book with all-new, all-original comic material. What began as disposable media for children was soon on its way to becoming the mythology of our time, the 20th century's answer to Atlas or Zorro. Over 40,000 comic books later, in honor of the publisher's 75th-anniversary, Taschen has produced the single most comprehensive book on DC Comics in an edition even Superman might have trouble lifting. Over 2,000 images are reproduced to bring the storylines, the characters, and their creators to vibrant life as they've never been seen before. Telling the tales behind the tomes is 35-year DC veteran Paul Levitz, whose in-depth essays trace the company's history, from its pulp origins through to the future of digital publishing. Massive foldout timelines and an in-depth appendix including biographies of the artists, writers, editors, publishers, and actors who cast the spell make this an invaluable reference for any comic book fan. You'll find them all here. $200.00
Lee: Here’s the fine print, the book is 640 pages long! It’s basically an omnibus history of DC by Paul Levitz. I can tell you if it was ½ this price I would buy it in heartbeat. But $200 is beyond even me. Looks awesome though.
Jim: I agree. It sounds awesome, it looks awesome but $200 means it does not come home. I wish they would split it into two volumes as 640 pages is really too big of book to read and enjoy and that way I could justify buying two books for $100 each.
Gwen: So you're willing to pay $200 for the material but only if you can lift it more easily? Just wait until it's on Kindle.

The Horror! The Horror! The Horror Comics that the Government Didn’t Want You Read
The Horror! uncovers a rare treasury of some of the most important and neglected stories in American literature - the pre-Code horror comics of the 1950s. These outrageous comic book images, censored by Congress in an infamous televised U.S. Senate subcommittee investigating juvenile delinquency in 1954, have rarely been seen since they were first published. Jim Trombetta provides a detailed history and context for these stories and their creators, spinning a tale of horror and government censorship. $24.95
Lee: With everything that has been reprinted these days, I’m hard pressed to believe that the original books that caused the creation of the code haven’t been reprinted. Actually, more than a few were EC’s and that material has been in print for ages. I need to have some more details before I will commit.
Jim: It sounds like hype and stuff that was probably just canned after the whole Congressional thing get the companies to bail out before they got in more trouble. It is probably no better and more likely worse then the EC material.
Gwen: Can't say I'm interested - especially since some of the stuff published as comic books now would make the stuff censored by the comics code seem tame. 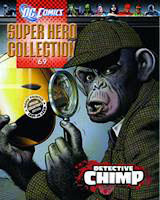 Misc
DC Superhero Figure Collector's Magazine #69 (Detective Chimp)
The ultimate collection for comics fans, the DC Superhero Collection Figurine Magazine brings together DC Comics' greatest heroes and villains! Official figurines of the characters, both good and evil, are cast in lead, individually hand-painted and numbered to form an authentic collector's edition. Each comes with a 20-page magazine providing detailed history and background on the featured characters, including exclusive images and interviews. (NOTE: Figurines are made of lead.) $14.00
Lee: This is for Monkey Boy Jim. You have all the other action figures you should get this one too. It’s a monkey… you love monkeys. Just don’t suck on it because of that lead thing.
Jim: It is tempting.
Gwen: Well at least now I know what to get Jim for a gift this year!

Lee: WOW! What a month. Tons of stuff by established creators for guaranteed goodness, a WWE collection, and a lead statue of a monkey. Seriously, what more can a comic geek ask for? Well, if I had one mire wish, I might ask for a picture of Gwen in her best Sailor Moon outfit, BUT I WON’T because she’s getting married. But other than that it’s a perfect month.
Jim: If I had a wish it would be for a billion dollars, then I could pay Lee to wear a Detective Chimp outfit.
Gwen: Sailor Moon? I mean I have Batgirl, Supergirl and Wonder Woman costumes... but no Sailor Moon thanks.
Posted by Lee at Friday, August 27, 2010