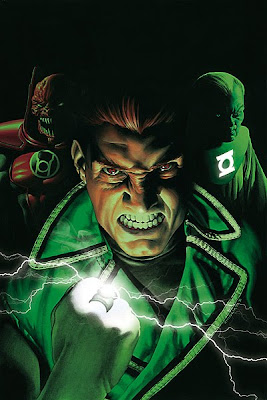 Green Lantern: Emerald Warriors is a good book. Peter Tomasi does an excellent job with Guy Gardner’s characterization and has some gorgeous art courtesy of Fernando Pasarin. This is a solid, above average superhero comic. Yet, I can’t help wonder why it exists.

I mean, I know why it exists. Under Geoff Johns, Green Lantern has become a massive success for DC and they believe the sales warrant a third title. But I can’t see any real narrative reason to publish a third Green Lantern book.

As a title that has had no less than four starring characters over its history (five if you count Alan Scott), the Green Lantern franchise certainly has enough characters to go around. For the last few years, we’ve had the main GL book, which features Hal Jordan, and GL Corps, which basically features everyone else. To my mind, that’s about as far as you can stretch this franchise, and this issue doesn’t do much to change my mind.

If this same exact issue was published as the first issue of a new storyline in GL Corps, the only thing that would be different would be that we’d wonder where Kyle and a few supporting characters were. It even heavily features Ganthet, who I believe is supposed to be one of the three main characters in GL Corps. The element of this book that is designed to set it apart from GL and GL Corps is whatever bargain Guy and Ganthet have made with the Red Lanterns, and that is by far the most tedious part of the book.

Sure, Guy is setting out to explore the outer reaches of the universe, but the book establishes that as a cover for whatever Guy’s bargain is. That’d be fine if this were the first we’d heard about it, but they’ve been teasing us about this for months and this issue didn’t give us any new information. None. Zero. El Zilcho. We didn’t need the entire storyline laid out for us in this issue, but this is a book that is extremely similar to GL Corps. This issue needed to lay out why this title isn’t redundant and it didn’t do that at all.

In the first issue of any book, original or spin off, you need to give the reader an idea of what the book’s about, and this issue didn’t do that. Like Jim said in his mini review the other day, I wish the writer would just trust his ability to tell a story instead of deciding to lead us around by the nose and counting on us being excited for the journey. Here’s hoping that this book finds its footing and gives us a reason to follow it, cause its failure to outline a central premise was getting in the way of a good book.
Posted by Greg at Tuesday, August 17, 2010