Humanoids Inc
Metal HC by (W) Jerrold E. Brown, Paul Alexander (A) Butch Guice, Roman Surzhenko
Elias, Ruler of the Huron Dynasty, is determined to unite his Empire and defeat the ominous alien forces known as Prime. Elias is betrayed and murdered. His life force is stuck inside his combat robot, giving it life. Can he unite his people, despite his metal form, and destroy Prime? $29.95
Lee: Where did this come from? I think it's older work by Guice but I can't be sure. Humanoids is still trying to rebuild their brand so I'm betting they are picking only the best books publish for awhile. So even though the story sounds generic, strength of art and faith in publisher is making me take the chance.
Jim: Maybe this was done when Guice disappeared from American comics. I agree with Lee on this one the art and publisher make this a buy.
Gwen: This looks like it has a lot of potential - sometimes it's hard to tell all that much about a story from the solicitations.

Mcclelland & Stewart
Two Generals GN by (W/A) Scott Chantler
In March of 1943, Law Chantler shipped out across the Atlantic for service with the Highland Light Infantry of Canada, along with his best friend, Jack, a fellow officer. Soon, they would find themselves making a rocky crossing of the English Channel as part of one of the most pivotal and treacherous military operations of World War II: the Allied invasion of Normandy. Two Generals recounts what happened there through the eyes of these two young men, everyday heroes who risked their lives for the Allied cause. $24.95 Visit Chandler here.
Lee: This is an easy buy. Chantler wrote the book “Northwest Passage” for Oni Press a couple of years ago, and it was great. This book, like “Passage,” is historical, graphic fiction and should be excellent. This will be well worth the investment.
Jim: I've become a sucker for this type of book lately and I will also be signing up for this title. As much as I hate to say it since I have been listening to Lee's picks for a long time I know when Lee likes a certain type of title it makes it a no-brainer for me.
Gwen: I'm not much into the war stories but I like the perspective it's being told from. It sounds like it could be an interesting take on this battle.

Monsterverse LLC
Bela Lugosi: Tales from the Grave by (W/A) Various
An anthology of stories in the classic horror comics tradition, presented by horror film icon Bela Lugosi with the help of his assistant, Hugo, and his sexy vampire groupie, Nosferina. Also featuring Lugosi portraits by various artists, a short claymation-style photo strip starting the aging Lugosi and his Ed Wood film co-star, Tor Johnson and a text piece by eminent Lugosi scholar and author Gary D. Rhodes. Creators include Kerry Gammill, John Cassaday, Terry Beatty, Bruce Timm, and many more. $4.99
Lee: The names associated with this are too good for me not to try it. I just hope it's good.
Jim: Of course knowing how Lee's picks books also makes it easy to skip a pick of his. This holds no interest whatsoever for me.
Gwen: I think this would make a great Christmas or birthday present for my friends who are into horror films so I may end up getting at least one copy for that reason. I think if you enjoy going to horror conventions you'd probably enjoy this.

NBM
Miss Don’t Touch Me Vol. 02 GN by (W) Hubert (A) Kerascoet
Blanche tries to leave the Pompadour, the high class house of call-girls, but their hooks are in deep. Nevertheless, she encounters what could be her ticket out: a very handsome and very respectful young rich man, Antoine. She also reunites with her long-lost mother. It all seems rather idyllic but Antoine may be a little too respectful and why has her mother suddenly reappeared? $14.99
Lee: This month really is like old home week in Indies because so many established creators have books coming out. The first “Don’t Touch Me” was an excellent murder mystery. It had a neat little conclusion so I’m wondering where the story can go. Another easy win.
Jim: I really want to borrow the first volume of this story before jumping into this book. Of course it is harder to borrow books from Lee now that he is in France.
Gwen: It's okay Jim, maybe we'll see him in May when we're in Europe and can steal his comic books.

Pantheon Books
Charles Burns’ X’ed Out GN by (W/A) Charles Burns
From the creator of Black Hole, the first volume of an epic masterpiece of graphic fiction in brilliant color! Doug is having a strange night. A weird buzzing noise on the other side of the wall has woken him up, and there, across the room, next to a huge hole torn out of the bricks, sits his beloved cat, Inky, who died years ago. What's going on? Drawing inspiration from such diverse influences as Hergé and William Burroughs, Charles Burns has given us a dazzling spectral fever-dream - and a comic-book masterpiece. $19.95
Lee: New Charles Burns! Need I say more? How about Charles Burns in COLOR? I am gonna go broke this month.
Jim: I'm not familiar with Charles Burns, but I will be this is another book I want to check out it sounds pretty cool.
Gwen: That solicitation tells me nothing about the actual premise of the story... and yet I really want to read this. I don't think I can resist a book with a cat named Inky. I am intrigued. 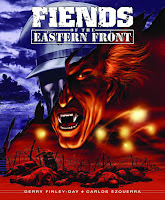 Rebellion / 2000AD
Fiends of the Eastern Front SC by (W) Gerry Finley-Day, David Bishop (A) Carlos Ezquerra, Colin McNeil
It was autumn 1980, and workmen excavating West Berlin make a ghoulish discovery - the skeleton of a German soldier, holding a diary, but little do they know that the diary's contents are far more terrifying! The diary belongs to Hans Schmitt, posted to the Eastern Front. His first entries record a unit of Romanian soldiers, experts in night-fighting, but it isn't too long before Schmitt realises the true nature of his comrades - blood-sucking vampires! $14.99
Lee: Yeah, there's a glut of vampiers on the market but I still like them. Correction, I like my vampires mean, vicious, and not involved with superheroes. Since this appears to meet my criteria I'll give it a whirl.
Jim: I like the vampire stuff I'm following, but I'm not looking to add anything new into the mix.
Gwen: Vampire/war story? Not really a combo I'd care to read.

Zombo: Can I Eat You Please? SC by (W) Al Ewing (A) Henry Flint
When Flight 303 en route to Epsilon-6 orbital station crash lands on the lethal deathworld of Chronos, all is not looking well for the thirty-three surviving passengers. Enter ZOMBO; a top secret government experiment - part zombie, part human ghoul, with a taste for living flesh. Will our friendly (yet crude) hero be able to save the passengers from a hideously painful death? $17.99
Lee: Normally I would pass but Flint’s art makes this an easy buy. He’s an awesome artist with an over the top style that fits this material perfectly. Don’t know how it will read but the visuals will be stunning.
Jim: As the guy who loves art, you can go for this, but I need to know the writer on this premise before taking a flyer on a book.
Gwen: I was sold at the awesome hilarious title. I am still laughing.