In with the New

In the course of finding the utterly abysmal Dazzler: The Movie graphic novel I came upon my one other remaining Marvel Graphic Novel from the '80s. Fortunately, this one's a lot better. 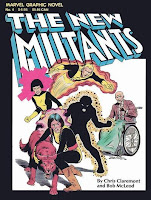 So, let's take a look at the incunabulum of what would become a terrible thing indeed - Uncanny X-Men spin-offs. It all seemed so innocent in 1982 when Marvel created The New Mutants. Who would have forseen the panoply of bottom line driven iterations? Why, no one in comics had ever before copied a success ad nauseum.
But let's go back to that time of innocence in 1982 when Professor Xavier thought the X-Men were all dead. Why, that had only happened a half dozen times by then! What made this time 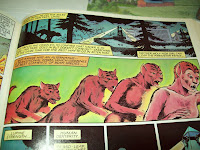 different? Instead of finding mutants to make a new Uncanny X-Men team, the moody professor intended to withdraw into his mansion, hiding his feelings of hurt and loss from all. Throw in a break-up and we'd have had a True Romance to end all True Romances.
Fortunately, we were all saved from that by Chris Claremont and Bob McLeod.
I jest, but The New Mutants were, for a time, one of my favorite Marvel books, and one of the few I still have in ye olde Comics Cabinet from that era. Marvel Graphic Novel #4 - The New Mutants wasn't much, really. It was later that things got more interesting, especially with the arrival of Bill Sienkiewcz on art for the ongoing series's issue 17. 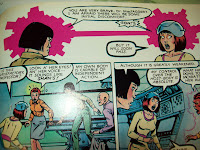 This graphic novel was the jumping off point for the group, with all but Karma being introduced for the first time. In fact, I didn't start reading about the group with this story. In 1982 I wasn't anywhere near a store that sold graphic novels, so it was some years later that I hunted this down. I started with the first issue of the ongoing series.
It was a good set up story. Dani Moonstar, Xian Manh, Sam Guthrie, Rahne Sinclair, and Rob 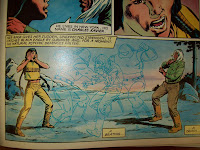 erto Da Costa are gathered together by a somewhat reluctant Professor Xavier. They're all just beginning to exhibit their powers. Xian (Karma) showed up in an issue of Fantastic Four and is already at the mansion when Moira MacTaggert brings Rahne (Wolfsbane) to be examined and trained. Dani (Psyche) is the daughter of a friend of Xavier. Her grandfather contacts him about her emerging powers. Da Costa (Sunspot) is the scion of a wealthy Brazilian whose powers manifest during a championship soccer game, while Guthrie (Cannonball) is a Kentuckian with dreams of college, relegated to coal mining by the death of his miner father.
The villain of our set piece is the cyborg Donald Pierce, who had previously been seen as the only 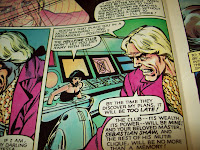 non-mutant in the leadership of the Hellfire Club, nemeses of the Uncanny X-Men whose insidious plotting had eventually led to the "death" of Jean Grey. Ah, those halcyon days when it seemed like a character might actually stay dead. Not like our set up here where Xavier thinks the rest of the X-Men are dead. Readers already knew they weren't because they could be seen in their own book off in space, fighting the Brood. 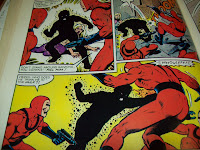 But I digress. Pierce's mercenaries include the guards at the Hellfire Club who were sliced and diced by Wolverine during their confrontation, and who are now cyborgs as a result. So, it's the cyborgs versus the kiddie mutants. Pierce has an unrelenting hate of mutants now, I don't recall why. He seemed perfectly happy to work with mutants when he was a member of the Hellfire Club, but now he just wants to kill them all, including his former allies (who don't appear in this story, except for the Black Queen, Tessa, who's sole purpose is to be a sanitation engineer to get rid of the defeated Pierce). Pierce has an unexplained ability to tap into Xavier's efforts to locate these new young mutants and decides to just let Xavier gather them all together in one place to save Pierce some time in killing them all.
First stop is to get Dani, who has some amusingly '70s racial biases. There's no explanation of why she doesn't like white people, or anyone who's not a Cheyenne, I suppose, but it's a lot of 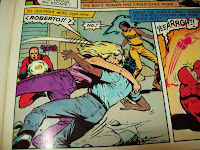 anger without direction. Next stop is Da Costa, who has his own anger issues after his girlfriend is killed by Pierce's mercenaries. Naturally, she's heroically trying to save him when she's killed, so he can blame himself for her death, too. This was one too many misplaced anger heroes in the group, but fortunately, Dani's anger issues didn't last long. That may be why I've always had an affection for her character but rather less for Da Costa.
Once the first four were together they went to Kentucky to find Sam, but his mining company 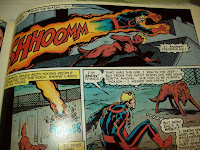 employer was owned by Pierce. Pierce deceived Sam into working for him as a guard alongside the mercenaries, so Sam fights the others when they arrive both to get him and engage in a ruction with Pierce. 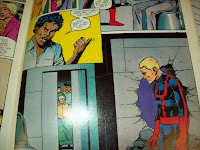 After Pierece is defeated, and Sam realizes the deception, Professor Xavier is disturbingly willing to just leave Sam behind when Da Costa goes off on Sam for having helped Pierce. Of course, Sam shows up at the mansion not long after and is welcomed by the three female members of the new team, Da Costa sulking off to the side. And that's it until the regular series got off the ground in 1983.
McLeod's art is nothing overly memorable. It gets the job done. Clearly, though, Claremont and 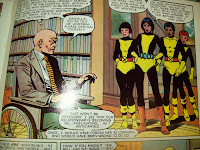 McLeod were serious about this being a student training group, not intended to replace the X-Men, because they're majorly subscribing to the ugly school uniform as bonding methodology. Those black and yellow uniforms go back to the original team's founding in the '60s, but by 1982 one would have thought the school would have moved ahead more than Xavier just allowing Dani to add some Cheyenne touches to her otherwise hideous uniform. I suppose Wolfsbane and Sunspot were the lucky ones, considering no one could see their uniforms when they used their powers.
The book did a nice job of establishing the founding group, the character's personalities, and the overall direction of the series (training group, not combat force) that would be the basis of the ongoing series for years to come. Mostly, though, it's an object of historical keeping for me. It's not so much the quality of the work as the fact that it was the start of something that got a lot better. Kind of like having the early issues of Swamp Thing, just before Alan Moore came on and turned the whole thing upside down. Nothing so radical ever happened with The New Mutants, but better things did happen later in the series. Of course, the real mystery from that era, and all the time that had gone before, is why was Xavier's lap always cold?
Posted by Thomm at Sunday, August 22, 2010