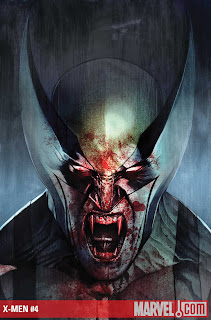 X-MEN #4
Written by Victor Gischler Penciled by Paco Medina
Cover by Adi Granov Variant Cover by Paco Medina
Vampire Variant by TBA
“Curse Of The Mutants,” Part 4 With thousands of vampires poised to attack Utopia, just waiting for the word from their leader, Xarus, the X-Men’s best hope for survival just might lie in a most unlikely new ally: the newly resurrected Dracula, who has more than a bone to pick with his traitorous son. But the problem cuts even deeper: The X-Men have lost one of their greatest warriors, fallen victim to a vampire bite. Brace yourself for Vampire Wolverine! 32 PGS./ $3.99
Jim: Vampire Wolverine???? Doesn’t he have healing factor that would throw off vampirism like a bullet to his head??? This seems so lame and the first issue which I read as an assignment for Cosmic Comix panel discussion was lame!
Greg: This is stupid. Unless you are 14. In which case it is TOTALLY AWESOME! Just imagine reading this and then drawing pentagrams on your desk with an exacto knife.
Lee: You never know, it might be good. I'm sure the first issue was just trying to find it's way. It'll get better. 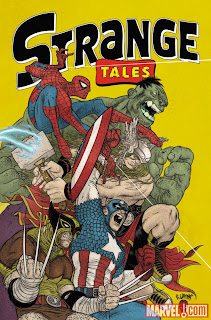 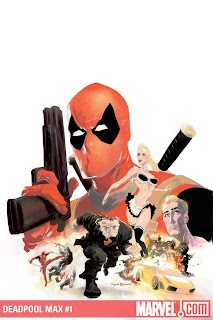 DEADPOOLMAX #1
Written by Dave Lapham Pencils & Cover by Kyle Baker “HEADS UP” When the world has a problem that's bigger than any government, special ops team, or C.I.A. smart bomb can solve, they call in the one man crazy enough to solve it: Deadpool. Possibly unkillable mercenary, definite weapons expert and swordsman, hopeless romantic, nutjob. It's that last part that presents a small problem and that’s where Agent Bob steps in. Bob’s sole charge in life is to point Deadpool at the problem and pull the trigger -- not any easy task when your agent is a dime short of a dollar and three cards shy of a full deck, and even harder when you've gone deep cover in the impenetrable fortress of Hammerhead, the Grand Don of the most powerful criminal organization in the world, and your unkillable super agent is head over heels for a busty French maid baker named Inga...well, you begin to see the inherent problems of the job. But no one can take it like Bob, no one can dish it like Deadpool, and no one can show you every last detail if it like MAX! You may think you know Deadpool …you have no idea. 32 PGS./ $3.99
Jim: When will this character finally be used up! Okay with Lapham writing and Baker on the art I will probably be buying this book. But I’m still sick of seeing Deadpool everywhere. Hey maybe he can kill all the vampires or they can kill him.
Greg: I really don’t mind the Deadpool thing. Maybe cause it’s the character is sorta in on the joke. But I think its cause the quality of the creative teams on these things is shockingly high. I mean does the world need a DeadpoolMAX book? God no. But I will always have time for something by David Lapham and Kyle Baker. I just hope that Baker ditches the poser software and actually draws this.
Lee: This is a tough call because Lapham's work lately has been more miss than hit. And I already have a ton of Baker art in the collection. It has potential but I think I am going to wait for some reviews before commiting. 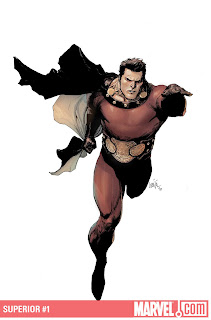 SUPERIOR #1 (of 6)
Written by Mark Millar Pencils & Cover by Leinil Francis Yu
Ollie Janson had it all going for him—plenty of friends at school, good looks, and his coach called him one of the most talented basketball players he’s ever seen. But that was when he could still move his legs. Now he’s living with multiple sclerosis, missing all the little things he used to take for granted, and escaping into the world of movies and comics with his best friend. Then… SUPERIOR entered his life. 32 PGS./ $2.99 NOT FINAL COVER
Jim: I’m so done with Millar, when I see his name on anything it is almost an immediate pass. He is like pop music, very popular, catering to the lowest common denominator and ultimately empty.
Greg: I’m with Jim here. (Oh god, I think I threw up in my mouth) Millar has some good ideas, but everything is such ridiculous hyperbole. If he could get past his ego, there could be a good writer in there somewhere.
Lee: Now you two are just getting picky! Millar creates popcorn superheroes for the newest generation of readers. Yeah, it ridiculously over the top but in a fun way. It’s like drinking until you vomit, you know it isn’t good for you but you still do it.
Jim: Wait a minute, Lee is passing up Lapham and Baker and defending Millar, WTF!!! 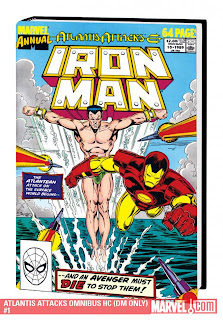 ATLANTIS ATTACKS OMNIBUS HC
Written, Penciled by Various
Covers by Mike Mayhew & Bob Layton
Evil undersea monarchs Ghaur and Llyra are determined to bring the elder god Set to Earth, and no one on the surface world will stop them! Seven mortal women—including the Invisible Women, She-Hulk and Marvel Girl—have been selected to act as the brides of Set’s snake heads, and the ensuing conflict will spread to nearly every hero on Earth, from the Avengers to Quasar to the Punisher to the X-Men to the Fantastic Four! Can the heroes stop this terrible plot in time? Plus: the complex history of the Serpent Crown, recounted in full! Collecting Silver Surfer Annual #2, Iron Man Annual #10, Marvel Comics Presents #26, Uncanny X-Men Annual #13, Amazing Spider-Man Annual #23, Punisher Annual #2, Spectacular Spider-Man Annual #9, Daredevil Annual #5, Avengers Annual #18, New Mutants #76, New Mutants Annual #5, X-Factor Annual #4, Web Of Spider-Man Annual #5, Avengers West Coast #56, Avengers West Coast Annual #4, Thor Annual #14 And Fantastic Four Annual #22. 544 Pgs./ $75.00
Jim: No, no and no. This was not a great cross-over and in fact it was a summer annual thing that was done to just fill out pages in those annuals. Not worth the paper it was printed on.
Greg: No one ever went broke banking on nerds’ nostalgia.
Lee: Marvel keeps reprinting this material so someone has to be buying them. I won’t make a judgement on the quality because I don’t remember. But, at best, it isn’t far above generic superheroes. 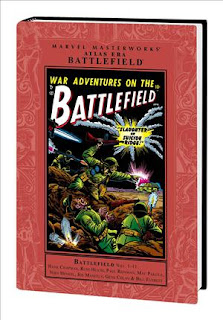 MARVEL MASTERWORKS: ATLAS ERA BATTLEFIELD VOL. 1 HC
Written by Hank Chapman, Don Rico & More Penciled by Various
In the early 1950s with the Korean War raging Marvel Comics’ predecessor, Atlas, launched a bevy of war comics featuring the heroism and horrors of human conflict. Battlefield ranked four-star amongst them with art by Atlas Era luminaries including war comics great Russ Heath along with Paul Reinman, Joe Maneely, Gene Colan, Bill Everett and many more. With challenging scripts by Stan Lee’s stable of Atlas Era scribes these never-before-reprinted pre-Code comics delve into a challenging range of themes—from tales of the American fightin’ G.I., to the machinations of the Communist front, and striking meditations on the atrocities of modern war. This amazing Marvel Masterworks collects the complete run of Battlfield in one beautiful volume. Topped off with an introduction by Atlas Era scholar, Dr. Michael J. Vassallo, there’s no doubt that it’s time to join up and set out on the battlefield! Collecting Battlefield #1-11. 336 PGS/ $64.99
Jim: I almost got this but I have enough of this type of material in my collection. Feel free to buy it as a gift and send to me if you want.
Greg: Seems like an interesting piece of comics history, but not really my cup of tea.
Lee: I’m still getting this. The art in these books is great and it’s all new to me. DC has reprinted so much of their war material that I am glad Marvel is finally starting to reprint some of theirs too. 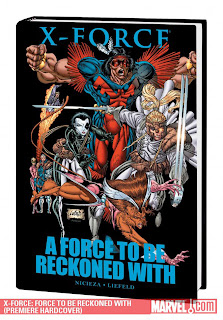 X-FORCE: A FORCE TO BE RECKONED WITH PREMIERE HC
Written by Fabian Nicieza & Rob Liefeld Penciled, Covers by Rob Liefeld
Cable has taken over the New Mutants and molded them into a precision strike force! With new members Shatterstar, Warpath, Domino, Siryn and Feral, the group is ready to face any threat, and is determined to shut down Stryfe and his Mutant Liberation Front once and for all! And when the Juggernaut and Black Tom take a building full of hostages, X-Force needs Spider-Man’s help to stop them! Featuring the first appearance of Deadpool! Collecting New Mutants #98-100, X-Force #1-4 & Spider-Man #16. 248 PGS./ $29.99
Lee: Greg was just to shy to pick this book himself so I'll pick it for him. For me, this is utter crap. But I'm pretty sure that Greg ended up buying second copies of all these books because he loved them soooo much. I guess the only question is if Greg could actually read at the time.
Greg: While I loved my fair share of crappy comics in my youth, ESPECIALLY crappy X-comics, I've always found Liefeld's art to be repellent. What is the point of this book, though? Are they just giving bloggers an easy way to scan goofy panels that they can post in lieu of actual writing?
Jim: I found Liefeld to be repellent. I never understood why he had the popularity he had.

Jim: See I was hardly negative at all Lee. I was brimming with glowing and positive things to say.
Greg: Vampires and Mark Millar aside, this was a pretty strong month. If this keeps up, maybe Jim can open up his heart and learn to love again.
Lee: Actually, it isn't a bad month. Marvel still floods the stands but at least some of it looks better. I'm more shocked that our resident fanboy decided to actually pass on some issues.
Posted by Lee at Friday, August 20, 2010