Crossing over with John Edw- I mean, Marvel Comics 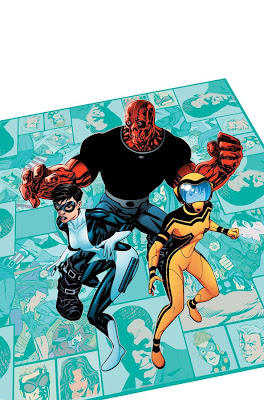 Crossovers are always a tricky beast. On the one hand, they sell extraordinarily well (For example, Civil War), so publishers are always keen on trying them out. On the other, putting together a large swath of characters that often only seem belong in the same universe if you squint hard enough brings out some of the worst excesses of superhero comics and aggravates a lot of comic book fandom (For example, Civil War). Publishers are often trying to find a new approach to crossovers so they can reap the benefits of the sales while avoiding the creative pitfalls that leave fans foaming at the mouth. Avengers Academy #3 and Thunderbolts #147 is the latest attempt in this effort and one of the most interesting in a long time.

Essentially, these books cross over by showing the same event, (the Avengers Academy students visiting the Raft, home of the Thunderbolts, as part of a Scared Straight program) from the perspective of each title’s main characters. Thematically, a cross over between these two books works. Thunderbolts is about trying to forcibly reform supervillians and Avengers Academy is about the Avengers trying to keep a bunch of abused, young superheroes from becoming supervillians. A scared straight program neither feels forced, nor convoluted.

This isn’t the first time I’ve seen this type of crossover. Back when he was writing Alpha Flight and Uncanny X-Men in the late 90’s, Steven Segal had Alpha Flight try to recapture Wolverine and showed the same event from two different perspectives in each book. I’m sure it’s been done other times before as well. When this works, reading both books enriches the experience, but you should be able to read either in isolation. Ideally, this has all the advantages of a crossover (showing off another book in the hope of crossover appeal) without any of the draw backs (having to read 20 books to keep it all straight). So how does this crossover do?

If we’re evaluating the books individually, they’re both excellent. Thunderbolts is doing a great job of maintaining the book’s balance between its cast of criminals and heroes. Avengers Academy continues to make its characters sympathetic while also believably portraying them as having the potential to go off the rails. 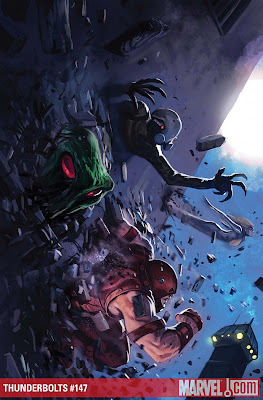 As far as a evaluating it as a crossover, it’s a bit of a mixed bag. It’s a success in that they are both standalone and you can read either in isolation. Avengers Academy works particularly well in this regard. If you weren’t aware the Thunderbolts tie in, you could easily read them as guest stars in the issue. With great scenes like Ghost’s insane rantings about Hank Pym rewiring their brains at the microscopic level and Tony Stark’s control of international finance, they’re easily interesting enough that you may go ahead and check out their own book.

Thunderbolts is a bit less successful. The story with the Avengers Academy makes up only about half the issue, the first half finishing off a story about some SHIELD agents being mutated by the terrigen mists. The Avengers Academy appearance is brief and more or less incidental. It does use the events of the crossover (Hazmat causing an EMP that blacks out the Raft), but really that could have been done with any macguffin. That said, the books’ crossover works best in an area that these things usually fall down: characterization. In both books, the Juggernaut is given a moment of characterization that is revealing for his current direction and most shockingly of all, consistently portrayed by both creative teams. Despite all this, this is a good issue of Thunderbolts. The prison riot story is very well done, especially when you consider how brief it is, and if you’re just reading this book, it hardly feels like an interruption at all.

All in all, this isn’t wildly successful, but it is interesting to read and it doesn’t feel like an intrusion in either book. Avengers Academy does a great job utilizing the Thunderbolt’s characters and settings, while Thunderbolts doesn’t really take the same advantage of this opportunity. I'd love to see two other books with similar styles give this kind of crossover a go before we get the next Shadowland or whatever.
Posted by Greg at Tuesday, August 24, 2010