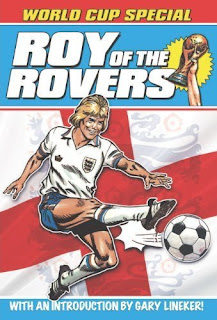 So far, the one thing that I miss the most from the US, other than English language comics, is the constant flow of sports. I loved following the teams, watching games as time would allow, reading about them, and even listening to sports talk on the radio. I just loved sports. Of course, as an American, the one sport I never got into was soccer, or football as the rest of the world calls it.

Of course, living in France gave me the opportunity to watch more World Cup football than any one person has a right too. To be fair, there aren’t any other sports on so there wasn’t anything else to watch. But it was good enough that I decided to see what it was like in comic books, so I picked up a copy of Roy of the Rovers World Cup Special.

For those unfamiliar with Roy and the Rovers, which would be most of our readers, Roy, our hero, is the best player on the Rovers football team. Always of a sharp mind and accurate kick, Roy leads his team to many a victory! The World Cup Special is a greatest hits of stories that happen to involve the World Cup.

The first story, written in the 50’s and has all the silliness that you would expect from a 50’s comic book story. Roy and the team are traveling through Australia when a cattle farmer enters them into local tournament dubbed the ‘Australian World Cup’. Actually, entered is a strong term, the farmers bets his farm against a dishonest rancher that Roy and crew can win the tournament! Roy feels obligated to help and ends up playing against teams of Italian acrobats, aborigines, and even Bulgarian miners. If you can imagine a 1950 imaginary Superman story with soccer balls and no cape then you have a pretty good idea what this story is like.

Another story, written in the 70’s, involved a mistaken identity with one of the players and a Prince of a foreign country. But the capper of the collection is a story about a group of American’s practicing for a run at the World Cup against the Rovers.

The stories in this collection are all very good. In fact, I was surprised how good they were. Don't get me wrong, they aren’t earth shattering, world changing cosmic events or anything of that nature but they are light hearted stories about sports and sports stars. There is something for everyone in this collection from the ridiculous Australian World Cup that you can’t help but laugh at to the portrayal of Americans as the ham fisted, over the top, over achievers the world believes us all to be. There’s nothing funnier than reading caricatures of your own cultures. The stories weren't mentally strenuous or taxing but they maintained tension through the various soccer games and kept it all fun. The art throughout is very good. It was never stellar but it was never ugly either. All the stories flowed and I really enjoyed it.

I'm not sure America has ever done a good sports comic, at least not since NFL Superpro (yes that was a real book) and this is an excellent collection that really shows how comics can be more than men in tights.