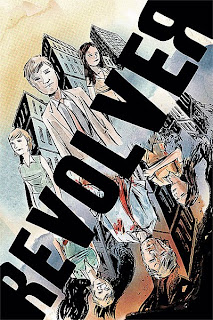 What an excellent book. Matt Kindt has turned out one of the best books I have read this year. Between reading stuff like this Parker The Hunter, Echo, American Vampire, Locke & Key and the rest I question my devotion to the cape and cowl set.
The story is about a guy who is stuck in a dead end job. He hates his life and he is just going through the motions. His boss hates him and his girl friend is much further up the ladder in the hierarchy. He is trapped in a life because that is what the world is all about. The life that he has is empty.
He also is living in a world where disaster has stuck. Cities have been bombed, electrical grids have been cut off, Seattle is a radioactive hole. In this world he is starting to come to life. He is thrown in a situation where he and his boss are forced to be together. Sam (our main character) has to think on his feet, fight for his life and make hard decisions. In this world he feels alive and his life has meaning to it.
As he constantly switches back and forth between the two worlds he uses what he learns in each one to his best benefit. He extorts a business trip from his boss Jan in the “real” world because of what she confessed to him in the post apocalyptic world. He learns things in the “real” world and puts that knowledge to use in the other world.
He ultimately discovers a self help guru who is at the center of it all and plots to end the post apocalyptic world. In the real world he abandons his old life and grabs his girl friend to drive to San Francisco and appears to be intent on taking out that same self help guru to prevent him from creating the other world again.
I’d rather not do a detailed summary of what happens as the different twist and turns make this book a great read. You are drawn into the story and it never lets you go. There are many things going on in this book and I’m sure I’m projecting myself into it at times.
One of the themes to me is the idea that our world can often be empty and lack meaning. As a society I have to agree at times. We are caught up in crass materialism that is causing the US to go bankrupt and will eventually lead to a severe economic downturn that will make the great depression just seem like a good one. I know many people disagree with me, but the math of the situation is impossible to dispute. Still what I think people can agree on that we have become caught up in too many material wants and have often lost track of what is important. This is reflected when the major news stations can often come across more like E! News then actual news. We are more concerned about Clinton’s wedding then we are about the revelations regarding Afghanistan. Our first lady spends $500,000 or more to go on a trip with her daughter as our country deals with a 10% jobless rate. The common causes and the need to try and make our world a better place seems to be lost in what we focus on. I’m preaching and moralizing, but this book made me think about how shallow and materialistic we have become. Of course great wealth does that, so the downturn will bring back more traditional values. The bottom line is the real world feels empty to Sam until he lives in the other world for some time.
The other part of this book that stuck with me is that in the “real” world he finds out what may have caused this particular schizophrenia. The doctor he talks to says it could all have occurred due to a blow to the head and Sam recalls back to how the story began, but now we see how he did hit his head. Is Sam just crazy? If he is crazy how did he managed to learn what he did about other people from the other world? At the end of the book Sam appears to be going to assassinate the self help guru, is Sam just gone nuts or is he right? Did the blow to the head give him an entrance to that world or is it a delusion.
We also see that Sam in the real world can make his life better; so much of how he approaches life is his view of things. We all go through situations where we can look at stuff and say how crappy everything is and we will never get out from this life. Other times we can look at the same set of facts and be happy with what we have built for ourselves and the people we have in our lives. Sam seems to learn that life is what we make of it, but he also seems intent on making sure the other world never comes to pass. Will he kill the guru or is he just trying to verify that the other world is gone.
I love a novel that leaves me wondering and one that makes me philosophical and think about life in broader strokes while still being entertaining as hell. Kindt is someone I was aware of but had passed on Super Spy and 3 Story The Secret History of Giant Man, I need to rectify that situation.
Overall Grade A+ - This is a masterful graphic novel that entertains and is thought provoking. Do yourself a favor and buy this book.
Posted by Jim at Friday, August 06, 2010