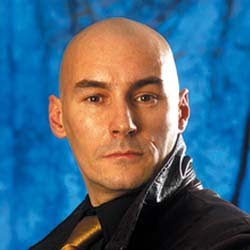 I have been struggling with this post for a few months. I think about writing it and then I run out of time. Heck, I don’t really have the time now. Last week in the comments section of one of Greg’s posts we started a debate about the best writer of all time, but did not come to agreement. My choice at this moment has to be Grant Morrison.
To present my rationale let me lay out some of the series he has worked on. The list is Animal Man, Doom Patrol, Final Crisis, 52, Superman, X-Men, Batman, JLA, Seven Soldiers, The Invisibles (which I have never read), WE3, Sea Guy and Marvel Boy. I know I’m missing plenty of stuff but remember I’m just outlining my case. In most of those titles mentioned he did what I would classify as seminal runs on the book. To refine that term, runs that stand out forever on a character and possible changed the dynamic of the comic forever. Heck I would go so far as to say All Star Superman is the best Superman story ever done on the character. X-Men was certainly the best it had been since Claremont/Byrne and Doom Patrol was the best since the original series. Morrison has some of the best ideas in comic and in fact DC started the Ryan Choi Atom from his concepts and The Great Ten was based on his ideas.
Anytime Grant Morrison writes a book I want to read it. I don’t always get what he is doing, I sometimes think he misses making the individual issues work in sacrifice to the overall story arc and sometimes I don’t like his work, but I always want to read his work. The reason is simple it is interesting, often challenging, occasionally indecipherable, but he moves characters forward. It might be pure gratitude that he put Dick under the mask and I hate this Batman franchising idea he has with Batman Inc., but I will be reading it because Grant might make it work.
X-Men was a meandering mess going nowhere and I know Marvel worked hard to wipe away what he had done, but he still managed to make one change and that is Cyclops is now with Emma and not Jean Grey. He ended the unending cycle of Jean and Scott and allowed the character of Cyclops to become what he is today, the strong willed leader of not just the X-Men, but the leader of all mutant kind.
Look at what he did with the JLA. He put all the big heroes back in the group and reinvigorated the title even hampered with Howard Porter’s art. Porter is not a bad artist, but was not up to what Morrison was writing. DC only needs to look at what Grant did and the group could be great again and not the morass it is today.
Look at his Doom Patrol work. Anyone who read the original series knows this was not a straight super hero group, but DC was trying to make it into one. Morrison came in and set the group on its ear and updated it into the strange group it was meant to be.
Now I know that many people would say Alan Moore, maybe Stan Lee or Siegel and Shuster and there are people who might say Gaiman, Ellis, Johns, Bendis (maybe his wife) or others. The reason why I ended up settling on Morrison is because the category is writer. Not the most influential writer of all times just the best writer. Any writer prior to the last 20 years has no chance because comics were written down to a younger audience and you were not even trying to be literate. Also we did not have the same type of system that allows for what we are seeing today with great runs on a creator owned titles like Walking Dead, Locke and Key, Echo, Scalped, American Vampire, Fables and the rest. Also if they wrote a book or two that impacted the industry but not much else, then volume does play into it, which eliminates Frank Miller in some ways.
As for the Alan Moore argument I say his impact was big, but Frank Miller’s Dark Knight was just as influential. As for his writing, I feel he has gone off the deep end even more then Morrison does at times and while he had an impact he has not been truly writing comics for many years with perhaps his last forays being LOEG and Tom Strong. Both were enjoyable (until the impenetrable Black Dossier book) but ultimately just good comics, while Morrison has done All Star Superman and is reworking the Batman mythology.
So at this moment in time the best comic book writer of all time is Grant Morrison. Of course he does have to watch his back because there is a slew of great writing talent who may one day challenge him but they have their work cut out for them.
Posted by Jim at Monday, August 16, 2010