The Week of August 18 In Review

Okay this week was a sub standard week for comics. Now I’m starting to write this column prior to reading everything, but in looking around and talking to some other fans what I have left won’t turn my opinion around. Heck I even picked up three or four extra books since it was a light week for me and still little stood out as stellar. 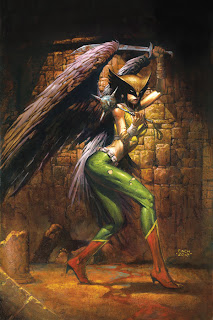 Brightest Day #8 was what I started with and it was an off issue to me. We start off with two pages involving Hawk, Dove and Deadman. It ends with Deadman asking the ring to take him to Hal and Dove disappears with him leaving Hawk wondering what had happened. That’s the last we see of them. So we got two pages that did almost nothing to advance any plot thread in the book. Next up is Martian Manhunter and Ms. Martian. We learn that she was attacked by a heretofore unknown Green Martian and J’onn after the Hawk segment ends up going to the magical white lantern forest in Star City. It all feels a little dragged out and feels like a forced tie in to the new Green Arrow book. Again we get six pages that moved the story forward a half step at best. Also the art for the Martian Manhunter segment was weaker then the art has even been before in this book and I worried it may be getting rushed. The rest of the issue was devoted to the Hawkworld segment and while we got some solid revelations it is further mucking up the history of Hawkman and Hawkgirl. I have no clue anymore as to who these characters are or what is the true history of these characters. I was fine when they were the eternal couple finding each other through their endless reincarnations and the nth metal came from a crashed Thanagar starship. Now we have a world that connects Thanagar to Earth, but I thought Thanagar was gone. We get Hawkgirl’s mother as a bad guy and I never even cared about her parentage. The Hawks need to be radioactive for about five years and then reintroduced to the DCU it has just gotten too convoluted again. So while it advanced the plot it just added more crap into a convoluted character. The final tally is only one plot was advanced and the other stuff was a little bit of treading water.

Since it was a lighter week I picked up Wolverine Weapon X #16, possibly the shortest lived Wolverine book ever. When Marvel adds all the numbering soon we should be up to around issue #1000 soon and they can beat DC to having an issue numbered 1,000. This issue was Wolverine handling a last request for Nightcrawler. I guess my problem with the book, besides$4 for a standard book, is that Nightcrawler has been reduced to being all about his faith. Growing up with the character during the Claremont/Byrne era and then not following the X-Men for years I do not remember Kurt being a man that had his faith on his sleeve all the time. I have no qualms with making this an element of his character, but making it the only quality of the character was annoying to me. Also I love how Wolverine is best friends with almost everyone, yet he is supposed to be this anti-hero loner, it always amuses me. All in all this issue failed to move me and was a weak lead in to the new series, AS IT HAD NOTHING REALLY TO DO WITH IT!
Okay I never got back to this review until now and I have finished everything, it was a weak week. Nothing fantastic and some books were okay, but a blah week in many ways.

Batman: Streets of Gotham #15 was an odd duck. First off I was expecting it to be more about Hush and instead the entire issue was about Two Face. On top of that it appears that Two Face is killed in this issue. Okay, granted his body was fished out of the water, but his henchmen stabbed him to death and threw his body in the water and he had to be under water for a few days. I’m not sure where Ivan Brandon is taking Two Face right now, but he is also the writer behind the Nemesis mini-series, so he seems to have long term plans for characters he is writing. It was just a totally unexpected issue and if it is the death of Two Face, it was done very quietly. Of course now I want to know what the heck is happening and probably next issue will be all about Hush.

I enjoyed Fables #97, but it seemed like the last issue came out a long time ago and it is destroying the flow of the story. I’m programmed for the monthly gaps in books, but longer than that and I have a harder time holding onto the story. To be fair this issue was so good that in the span of three pages I was captivated again and the story came back to me. This issue we get the end of Rose’s origin and she gets off her bed and decides to come back into the fray. Geppetto is trying to reestablish a power base and the Dark Man is apparently spreading out from Fabletown as we build up to issue #100, which maybe a good time to end this series, or at least give us a new group to follow.

I have to give David Hine credit. I like his writing and I’m actually enjoying Azrael. Issue #11 hit the stands and I was lost for about five pages as the character does not interest me, but the whole idea behind the Shroud of Turin conspiracy was great. Guillem March does a nice job on the artwork and right now I’m surprised that I like this book. It is in no way a Batman book other than some tenuous connect to the old Azrael and the fact that some of it is based in Gotham. Stretching this book under the Bat umbrella is just that a huge stretch.

I have to mention Atlas #4, first off I love this group, but what they did to Marvel Boy this month irritated me. Bob has always been wacky and we knew he was no longer human, but this issue they turned him into a totally alien looking being who had been projecting a normal face. It just felt pointless in the context of the story. Plus Jeff Parker is working overtime to make 3D Man meaningful and it is an interesting concept, but the whole arc was a poor choice for starting a series over with a number one issue. As a hard core fan of the title I’m fine with it, but I can’t see this generating any new fans, it is very dense story and would be next to impossible to recommend to a new reader.

On a whim I picked up Power Girl #15 after dropping the series. I still didn’t like it that much, but it is a decent comic. It is just not doing what I want it to do. It also made this a book that is on the fence for me. I will not add it to my official list, but I’m not sure if I’m dropping the book anymore.

Perhaps the biggest surprise for me was The Last Phantom #1. Another book I picked up since it was a lighter week. The artwork is generic and the story line was telegraphed a mile away. I knew from page one that the last Phantom’s in his civilian identity was going to have his entire life destroyed, which causes him to drench himself in his family’s blood and don the belt, rings and guns and become the Phantom. I can’t help myself, I loved this newspaper strip when I was a kid and I have added this book to my list. Sometimes you have to go classic to get a book started and with the Phantom a totally generic beginning still works. The proof will be in how it works going forward. I’m not sure this character works in a modern world.

Another book that I enjoyed this week was Hellblazer #270 as we wrapped up the John going crazy story and the Shade storyline. A surprise ending as Epiphany goes off with Shade to try and fix her face after John proposed to her. I was just about to drop this book when this arc hit and I have to say I’m back on this series and anxious to see where we go next.

That’s it for this week. A lot of other books came out, but not a lot that made me want to comment. I may get a review of sorts up later next week, but the Tuesday column is taking a week off due to the wedding of my daughter Jamie. With all of my writing taking place normally on week-ends and the coming week end is very busy. I will share one personal piece of information that even a cynic and cold hearted bastard is getting a little sentimental seeing his daughter getting married. That's about as gushing emotional as I get.

One last note this site is four years old today. I'm pretty sure we never missed having a new post every day, thanks to Lee, Gwen, Thomm, Matthew and Greg for helping to make this happen and making this blog be as sucessful as we have been.
Posted by Jim at Tuesday, August 24, 2010