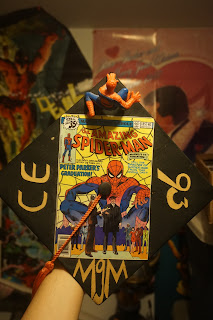 On Friday around 4 pm, my wife and I were exiting out of the local restaurant park when she gives me a high-five, "We did it!"  Did what you ask?  Well, we successfully navigated through THREE graduations in the last seven days: my daughter Charlotte from the University of Maryland College Park with a Bachelor's of Arts in Studio Art Painting and Art History (summa cum laude), my son Eric from Howard Community College with an Associates of Arts in Music, and my daughter Helen who had just graduated from Oakland Mills High School that morning at the newly renovated Merriweather Post Pavilion (where Jackson Browne recorded "Running On Empty" back in 1977 [there's that ever important year again]).  Of course we Thank God for all these blessings and for guiding and directing us to get to these momentous milestones.  I've got to say the High School graduation always seems to get you more emotionally as a parent -- its like you really need to at least get them to this point.  Anyway, it got me thinking about my past graduations from 30 and 25 years ago.

1988 -- I've just spilled my guts on the parking lot pavement of the Virginia Science Center in Richmond.  The fresh smell of my recently ingested graduation "lunch" intermingled with the stomach acid.  I was probably the most sick I had ever been up to that point -- sheer agony.  But it wasn't from the food, it was from a broken heart.  My "girlfriend" (long story there) was moving to Michigan and I didn't have time to say goodbye, since they were rushing families out of the Arthur Ashe Center quickly for the next high school ceremony.  Needless to say, I was torn up in knots before the food arrived and the stress and anxiety just made it impossible to enjoy the day.  What should have been a time of celebration was misery instead.  After all, I couldn't possibly think things would ever get better...

1993 -- We're celebrating my graduation from Virginia Tech (Bachelor's of Science in Civil Engineering) at my apartment, which I share with the girl I started dating about a year before.  The girl I didn't even meet until late-1990, the girl I didn't even like as more than a friend until late-1991, the girl who became my wife in late-1992!  God is so good!  It just goes to show you that you never know what's around the corner and sometimes what you think is the milestone (like a graduation) is really just a blip of your life and the real life changing events can occur on the ordinary days.

There is a comic angle coming up and it concerns my mortar board pictured above, which features the reduced photocopied cover of Amazing Spider-Man #185, published 40 years ago on July 18, 1978. [More after the break:]

Amazing Spider-Man #185 contains two stories: "Spider, Spider, Burning Bright" the conclusion the two-part White Dragon story, and "The Graduation of Peter Parker" both by Marv Wolfman and Ross Andru and Mike Esposito.  Marv had started writing the series with issue #183 after Len Wein completed his seminal run (probably my all-time favorite era).  Despite the C-list villains (the Rocket Racer, the Big Wheel, and good-ol White Dragon) these stories are fondly remembered for me since I got these issue on the stands.  In that very first issue of his, Wolfman had MJ reject Peter's marriage proposal and brought back a needy and neglected Betty Brant.  I'm rereading (too slowly for my tastes) these issues now (on #195) with my youngest son, Manny (Matthew Jr.) and I really like how Marv writes Spider-Man.

For the graduation story, Joe Robinson is visiting Aunt May in the hospital so that they can watch Peter's graduation from Empire State University (ESU) on TV.  Peter graduated from Forest Hills High School in issue #28 and started ESU in issue #31, where he met Gwen Stacy and Harry Osborn for the first time. (Peter meeting them in high school only happens in the movies and MJ doesn't show up until #42.)  As Peter's friends gather for the event, Pete finds that his name doesn't appear on the cap and gown list and has to wear an over-sized extra lying around.  He's not even listed in the program.  Things continue to worsen when J. Jonah Jameson steps on stage as the commencement speaker.  Finally, they skip over Peter's name completely.  When he asks the Dean about it, he is told that he was "one credit shy -- seems [he] didn't take a required gym class."  They had tried to call him, but he was busy battling the Green Goblin, etc.  Peter laments, "I was NEVER HOME when they called!  Once again, the specter of Spider-man has RUINED my life!" (read the next page below:) 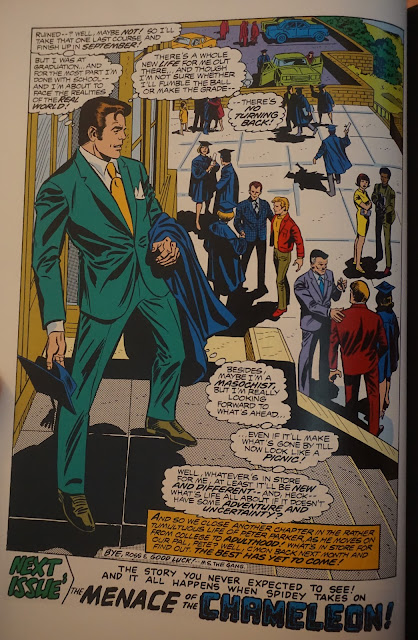 This was Ross Andru's final issue (he began in issue #125).  Coincidentally, it was also mine for a time -- the beginning of my brief comic drought period (something to explore another time).  I don't think I regularly got a Spider-Man title until Peter Parker:The Spectacular Spider-Man #64 with the first appearance of Cloak and Dagger (Their new TV show will premiere on freeform on June 7th.) I didn't get Amazing regularly until #251 with the intervening issues obtained as back issues.

And just what was in store for Peter around the corner..the Black Cat, the (first) death of Aunt May, being tied to JJJ with a ticking time-bomb for 24-hours, and eventually the rise of the Hobgoblin and the return of MJ.  In less than 10 years (our time), he'd be walking down the aisle with her [in Annual #21]! Just a about a year to the day (same month at least) before I graduated from high school.  During that time and in my college years I really identified with Peter, dreaming of one day marrying my best friend.  Happy to say, dreams do come true sometimes.  And that brings us full circle somewhat.

Thanks for reading and see you on July 1st (or later this week, if time permits).

Email ThisBlogThis!Share to TwitterShare to FacebookShare to Pinterest
Labels: Back Issues, Matthew's Musings