My recommendation of the week – or to steal from Lee – The best book that you are not reading – is Criminal. Ed Brubaker and Sean Phillips are having way too much fun telling stories about the bad guys (and not the super ones, just your normal bad guys). This stuff takes the noir feeling and puts it into a comic. It’s dark, it gritty, it’s the flip side of the world that exists around the corner from your house, but you never visit that neighborhood. For a taste of what life is like on the other side, read this book.

This is absolutely Brubaker’s best work and one that is well worth your time. It will be on hiatus for a short time so go pick up the trades. 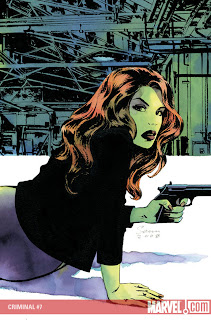 Criminal #7 – Writer Ed Brubaker, Art Sean Phillips, Colors Val Staples. Damn what a f**ked up ending. Jacob ends up shooting the cop who framed him and then kidnapping Iris. We find out that Iris was playing Jacob for the cop. The cop hated Jacob because he swore Jacob killed his wife. A very convoluted plotline while trying to explain it, but cross, double crosses abound and the cop and Iris wind up dead and Jacob is busted up and in a hospital possibly forever. This was a great story and the best arc by far in this well done series by Brubaker and Phillips. 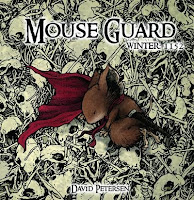 very happy to see this book back on the stands after a long hiatus caused by issues with the publisher. Not sure if all those issues are done, but it was nice to see Mouse Guard back. It was one of the more action packed issues with fights with bats and owls and poisoning of wells going on. I have forgotten bits and pieces of what is going on, but as I read through the story line started to come back to me. This is one of the best true all age comics on the stands. By all age, I do not mean a dumbed down kiddie version of super heroes, I mean a book that can be equally enjoyed by anyone.

Justice Society of America #21 – Story Alex Ross & Geoff Johns, Script Geoff Johns, Art Dale Eaglesham, Nathan Massengill, Jerry Ordway and Bob Wiacek. This issue is the penultimate chapter to the Kingdom Come story line as the skeptical members finally have some proof that Gog is not the benevolent god he pretends to be. As Gog also exerts his wish to be worshiped, even those who were following him have their doubts. This is one of those issues that I rush through to get to the end and then can’t wait until next month. It was a good issue, but the artwork was not up to its usually high levels and as the actual credits were left off it is hard to tell who did what. I do know that Eaglesham’s work has not look as good as it used to and I’m not sure if it the inking or something else. Anyway the next issue wraps up the story line and I’m guessing Magog (David) does not make it out alive.

Batman #682 – Writer Grant Morrison, Pencils Lee Garbett, Inks Trevor Scott, Colors Guy Major. I have enjoyed Grant Morrison’s Batman run and this issue was a fun and trippy book where we learn that almost all of the Batman stories are actually part of his continuity. Grant explains the darkness of the early years, the lighter moments after Dick joined Batman and shows that the old Kathy Kane Batwoman is part of continuity (and would DC please reprint some of those stories, they are incredibly dated, but also a lot of fun). We also see Batman strapped into some machine feeding a creature called Lump all of his memories and dreams which is being used by some bad guys to create an army of Batmen. Next issue concludes Grant’s run on Batman per the solicitation, but I hope that it is a hiatus and Grant has more to come because regardless of whether you loved or hated his run, it has been thought provoking. Of course I’m not sure when in continuity this story falls, but I assume it is after RIP. One last request the art team made this book look great and would be an excellent permanent art team on Batman.

Necronomicon #3 (of 4) – Writer William Messner-Loebs, Art Andrew Ritchie. This is one of the best horror series I have read in a very long time. The book is creepy and after reading it you also have an unsettled feeling, which to me is one heck of a good job in reading a horror book. Most horror comics are fun to read and the art maybe good, but seldom do they actually create a sense of horror or revulsion within this reader. I think the fact that the narrative derives from a young man writing his father and what he says is downplaying (in large degrees) to what is happening to him is very effective. If you have missed this series and you like horror, get the trade when it comes out.
_____________________________________________