Gwen's mentioned cleaning out and giving away. Jim and Lee have mentioned bad event series (like Secret Invasion). In my ongoing effort to review older stuff in my Comics Cabinet, I'm combining those two themes.

Regretfully, then, I bring to your attention, DC One Million. I'm pretty sure I bought this 4 issue

series, published in November 1998, because it was written by Grant Morrison. Why I've kept it this last decade is a mystery to me, but it's on its way out the door now. My only excuse is that I never opened it again after buying it in the first place and the Morrison name kept it in the Cabinet.

So, the story itself. Actually, first off we'll address the title. The thing is, I don't know why it's called One Million. It never says in the 4 issues. Maybe it was explained in one of the gazillion tie in issues, which evidently were necessary to read to make this thing in the least bit coherent. 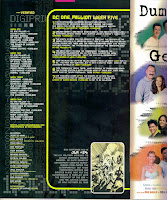 See, like 52, this series was published one issue per week. Except 52 was a coherent story all by itself. I could pick up or skip the titles the various characters were in without reading 52 or just read 52 all by itself. With One Million there were 34 other books associated with it and all published in November '98. Whether I needed all of them or just some of the to understand what was going on in the main book I don't know. I can only tell that a lot of shit happened outside of the 4 main issues that were germane to moving the story forward. As I didn't buy any of those issues, I guess I'll never know.

Anyway, this story was not only bad, it was totally irrelevant. In fact, the best thing about it may have been that all 4 issues featured a milk mustache add on the back that was a nicely sexy

The story was ostensibly about Vandal Savage (an immortal man) and Solaris (an immortal, intelligent sun) taking over, or wiping out, Earth in the year 85,271. Evidently time travel is common at this point. Superman's still alive, though he's been hibernating or something in the sun for 100 centuries. There's a bunch called Justice Legion A that consists of a robotic, time traveling Hourman, a Superman decendant (who looks just like Superman now), a Wonder Woman decendant (who seems to be short on melanin, as she's a might pale to the point of appearing to be one of the undead), a Batman with completely covered face, an Aquaman (who looks a lot like Poseiden), the Flash from the 2600s, and a Starman (who reminds me of Dr Fate for some reason).

They're supposed to be gathering JLA members up to go to their time for the grand celebration of the original Superman re-emerging from the sun, but it's all a trap set up by Vandal Savage and Solaris, facilitated by the fact that the Justice Legion A thought Solaris had been turned into a good guy by a Superman decendant some centuries before.

Oh, Montevideo, Uruguay is blown up in a nuclear explosion, too. That's in our time. Seems the

Vandal Savage of our time had captured Speedy/Red Arrow/Arsenal or whatever he was going by at this point, Supergirl (who's captured rather easily and doesn't seem very super), Jesse Quick and Garth/Tempest, who were trying to re-form the Teen Titans. Savage was buying some black market Rocket Red armor and sent one of the suits off with one of these four in it. He wasn't aiming for Montevideo, but the time traveling by the Justice League A sent it off course. Of course, the Teen Titan in the suit miraculously escaped somehow before impact.


The whole blowing up Montevideo is so throw away, it's ridiculous. No one really seems to care that the capital of Uruguay was blown up. In fact, with all the time travel going on in this series, the only thing done about it is that future Savage is thrown into Montevideo to be blown up with the city. They didn't bother trying to stop the explosion. They just used it to get rid of Savage. This is lame and not particularly heroic.

Anyway, the main JLA story line. The JLA is the Martian Manhunter, Batman, Superman, Wonder Woman, Steel, Aquaman (with one hand and a hook), Big Barda, Plastic Man, the Flash (Wally West, in particularly bad juvenile mode), the Kyle Rayner Green Lantern, the Huntress, and some angel named Zauriel that I know nothing about. Only Superman, Wonder Woman, Flash, Batman, Green Lantern and Aquaman are sent off to the future for the big party. Naturally, Solaris is actually still evil and the whole thing goes wrong so that the Justice Legion A is stuck in our time and the JLA is heavily out powered by the super sorts of the year 85271.

Stuff happens thereafter, but so much other stuff happened in the 34 associated issues, or some

parts of them, that I'm not really sure how we get from A to B. I know the 85271 Superman continues to lose power as he stays in our time. Something to do with getting his power from Solaris, I think. Anyway, he's near dead by the end when he somehow punches his way through time to get himself and the other Justice Legion A people back to their own time. Meantime, a lot of other superheroes, both from that time and other times that were brought then for the big party, are killed off by Solaris. These future heroes don't seem to know much about tactics. They keep on just flying in at Solaris and keep on ending up dead. In the end, Green Lantern goes into Solaris, somehow causes Solaris to go super nova and contains the super nova safely in a heavily inhabited star system. I think there was something with the Martian Manhunter somehow still being alive in 85271, having become one with Mars or something and bringing himself into the fight in some sort of advisory capacity. Beats me. I think most of that occurred in one of the associated books.

At the end, out Superman comes from the sun, all golden and shiny. In fact, he looks like Gold of the Metal Men. He gets reunited with his wife, which I guess is Lois Lane. She's never named. She's just created from some DNA sample Solaris had, with the assistance of some Superman from the Fifth Dimension. She looks like she's made of lead, but a Metal Man, too. Somehow Krypton is re-created with everyone on it who died right before Kal-El was sent off to earth. Jor-El and Lara even look just like the John Byrne depictions, right down to a haircut that seems straight out of Quantico.
Everyone goes back to where they were at the beginning of the story in our time, and the only "change" is that Vandal Savage from 85271 is dead in the Montevideo nuke. I suppose the nuked Montevideo is a big change, too, but since it's in South America and out of sight, out of mind, it doesn't seem to be much of an issue. Green Lantern was the witness to all the events of the returned Superman in the future and is telling the rest of the JLA about it as best he can as they sit around the round table. For the life of me, I can't figure out why Batman looks like he has curtain rods running across his shoulders under his cape. I can't help but think of Carol Burnette's Gone with the Wind parody. (Click on the image if you can't see it.) 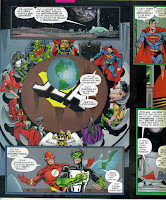 This was a waste of ink, not to mention my $11.80. It's a great example of how to do an event story wrong, though. All the same, I'll not be keeping it any longer, even for object lesson purposes. It escaped it's well deserved fate of disposal in some form long enough. Time now to put it to a merciful end.
Posted by Thomm at Sunday, December 28, 2008