Spotlight Review: The Tales of Beedle the Bard 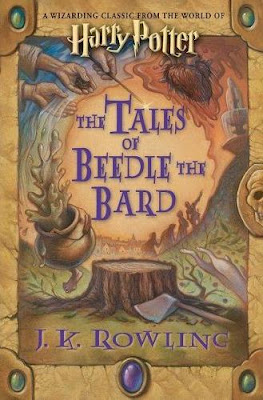 The Tales of Beedle the Bard
by J.K. Rowling
with commentary by Albus Dumbledore
translated by Hermione Granger

When I walked into the bookstore on my lunch break today I was extremely surprised to see this book. I had no idea that J.K. Rowling had wrote anything new! I suppose I don't pay very close attention to these things. Either way I was pretty excited to see this book on the shelves (most of the shelves actually) and after a brief glance at the content decided to pick it up.

For those of you who aren't familiar with the Harry Potter books these tales play a key role in the last book in the series, Harry Potter and the Deathly Hallows. Hermione ends up with an original copy thanks to Dumbledore and from one of the stories, "The Tale of The Three Brothers", Harry and his friends discover exactly what the Deathly Hallows are. Seeing how there are fans of Harry Potter who only follow the movies I won't go into too much detail. Regardless most of the other stories from Hermione's book aren't mentioned - only that Beedle the Bard's stories are common fairy tales told to young witches and wizards.

The stories themselves are written for a younger audience than I, yet I found them to be both entertaining and beautifully constructed. "The Fountain of Fair Fortune" was my favorite. It was very much so in the spirit of children's stories I knew as a child while still adding more depth to the world of Harry Potter. The tense relations between Muggles and magic users is often emphasized making these stories as controversial in Harry's world as some of our own fairy tales are in our world. There are also black and white illustrations throughout the book that acentuate the stories as well as the general appeal of the book. I should mention that I have a standard copy - there are some fairly impressive collectors editions out there, I just don't have that kind of money! Even so, I like that the net profits from these books are being given to the children's charity co-founded by Rowling, the Children's High Level Group. So if you are spending $100 on a collectors edition at least some of that money is going to a good cause. Also, it is pretty cool looking! The book is a quick read, but I was honestly happy about that as it provided a small break in studying for my finals - anything longer and I may have neglected studying. I have a problem with getting sucked into books.

The highlight of the book for many readers including myself is the commentary by Albus Dumbledore. Not only does it allow Beedle's tales to further enrich Rowling's magical world but it also gives further insight into the mind of an important and well loved character. I'd say more, but as stated I'd prefer to avoid spoilers for the movie-goers.

GRADE A: If you're a Harry Potter fan or just want some fun new fairy tales to read to your children you should definitely purchase this book. I thoroughly enjoyed it.
Posted by Gwen at Saturday, December 06, 2008