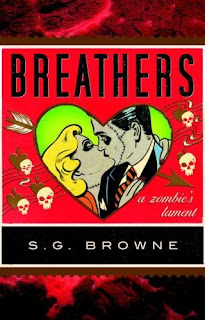 Normally, I leave the book reviews to Thomm on the weekends, but recently I read a book so good that I needed to talk about it. And, it’s close enough to most of the comic book topics that it fits right in! I read Breathers, A Zombie’s Lament by S.G. Browne.

Breathers is about Andy. Sure Andy lives in his parents basement. And it’s true that Andy doesn’t have a job, but Andy isn’t your typical loser. That’s because Andy is a zombie. Now, let’s clear some misconceptions up about zombies: (1) they aren’t brainless, (2) they have feelings like you and I, and (3) they just want to be treated like everyone else no matter how mangled and deformed they may appear.

Now, like most people, Andy doesn’t like living in his parent’s basement. He doesn’t like the fact that he cann’t play any productive role in society. Andy remembers what it was like to be alive and have a family and he wants those things again. After, Andy attends the local Undead Anonymous meetings, he realizes the only way to change the lowly social status of zombie is to protest!

So, Andy starts a crusade for zombie rights. It starts off simply with a hand painted sign and a stand-in on the town hall steps. But, when, Andy applies to get his social security number re-instated, all heck breaks out.

This book is an excellent story set in a very worn out genre. The first change is the most obvious, zombies are accepted. Well, not so much accepted as tolerated. For those rare few that actually come back, their parents can take ‘ownership’ of them or they are shipped to a zombie zoo. Once you accept that, the rest of the story is about a man’s attempt to get his life back. And, it’s hilarious. The absurdity of the various situations is fantastic.

Browne also gives Andy and his friends great personalities, even if they are slightly typical. The zombies are a group of people that would never have associated with each other under normal circumstances. He also makes the zombies very, very human. Andy often laments the fact that he can no longer see his daughter. How can he explain that Daddy’s a zombie? Inbetween the angst, Andy strikes up a relationship with another zombie and soon there’s zombie love in the air.

And, even it’s not obvious, this is a zombie story. People do die. Zombies do zombie what zombies do. But, it’s not your ordinary terror fest. Like everything else in this book, there’s a twist on the feasting and sometimes, people deserve to get eaten.

While there aren’t any pictures, Breathers is a light read that will help you pass a dull day away. This isn't by any stretch a work of literature, it’s a beach read for boys, and girls, who like some humor with their monsters.
Posted by Lee at Wednesday, April 14, 2010