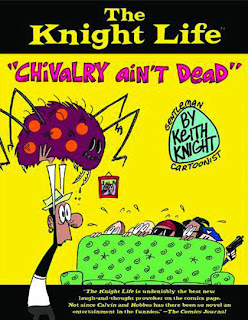 Knight Life: Chivalry Ain't Dead SC by (W/A) Keith Knight
Irreverent, topical, and always un-PC, The K-Chronicles has delighted, shocked, and just plain freaked out readers across the country. In The Knight Life, Keith Knight's collection of comic strips loosely based on his life, he skewers just about every political figure and social issue. $17.99 An excellent example of the strip here.
Lee: Wow, what another great find. I was thinking this was more slice-of-life stuff but it appears to be more skewer the idiots social commentary. And I’m all for that. This looks like great fun for all…. As long as your over 21.
Jim: Did you read this guy's crap? It is so knee jerk liberal as to be redundant. I can probably predict every opinion this guy has before I read his strip. PASS! 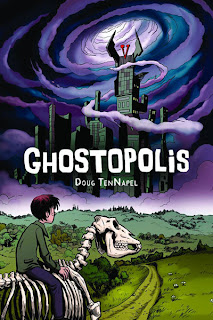 Ghostopolis HC by (w/a) Doug TenNapel
Imagine Garth Hale's surprise when he's accidentally zapped to the spirit world by Frank Gallows, a washed-out ghost wrangler. Suddenly Garth finds he has powers the ghosts don't have, but he's stuck in a world run by the evil ruler of Ghostopolis, who would use Garth's newfound abilities to rule the ghostly kingdom. When Garth meets Cecil, his grandfather's ghost, the pair search for a way to get Garth back home - and nearly lose hope until Frank Gallows shows up to fix his mistake. $24.99 Visit Doug here and read his very entertaining blog.
Lee: TenNapel has made his living producing graphic novels once or twice a year. If this is the direction of comics, then TenNapel is the poster child of success. In regards to this book, I’m not really sure. I liked TenNapel’s early works, but each successive volume has become heavier, and heavier handed with it’s positive message. His work is still very good and entertaining but it’s very close to a sermon about being saved and redemption.
Jim: Think that might be a syndrome of his being a Dad and trying to be positive for his kids which means he lost some of his edge from his Earthworm Jim days, who is still a favorite character of mine. 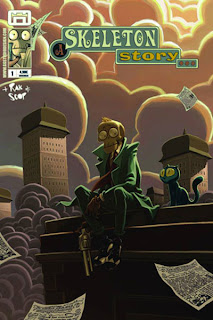 A Skeleton Story #1 by (W) GG Studio (A) Alessandro Rak
A Burtonesque noir fairy tale... Will Musil, Burma, Scarlett, Jack, and John are no longer tenants of the world of the living. They're dead. While each faces their role in the afterlife differently, Will seeks his own redemption in the underworld as a detective, at the service of the Old Lady. A wonderful opportunity presents itself one day when two unwanted guests crosses the border between worlds: a little girl and her cat... #1 of 5, $2.99 Visit Rak, the artist here.
Lee: I don’t think the cover really does this justice. I looked at Rak’s art and he’s very, very good. The art will be animation influenced but the composition from the pages I saw was great. This is a little bit of a stretch but I think you will be pleasantly pleased with the result.
Jim: I have ordered one of GG Studio's books as I'm sure my store wouldn't order it without my asking them to and this is the problem with new/small publishers. You get afraid to want the book as it may never get published. 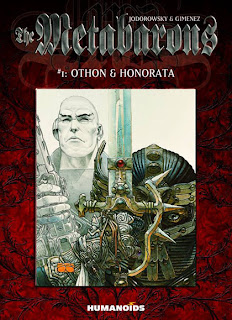 Metabarons Vol. 01: Othon & Honorata SC (new printing) by (W) Alexandro Jodorowsky (A) Juan Gimenez
Discover the lineage of the galaxy's ultimate warrior in these collections featuring the complete original artwork. The first volume introduces the Metabarons' ancestors and reveals their origins in a galaxy corrupted by greed, power and terror. Volume 2 sends Aghnar, the son of the first Metabaron, into battle against the psychic witches of Shabda-Oud. Volume 3 documents the life of the ruthless cyborg Metabaron, Steelhead. $17.95
Lee: This is actually a re-release but it’s soooo good that it deserves mention. This is one of the most intense science fiction comics ever written. It’s a generation spanning study about a warrior’s blood line. It’s amazingly brutal but not too violent. I can’t say enough about this. I have all the original issues but I want the trades so I’m getting this.
Jim: I loved this book when it was printed in the US, it was a great generations spanning saga and if you missed it this is a great way to read great material. 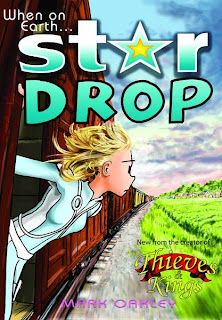 Stardrop Vol. 01 GN by (W/A) Mark Oakley
An uplifting tale from the creator of Thieves & Kings. Princess Ashelle has secretly come to Earth to escape the fires of galactic civil unrest and her warlord father. A kind and cheerful girl, her only wish is to make friends and have adventures in the beautiful small town she has discovered. But between boys, finding normal clothes to wear and paying the rent, the challenges for an alien girl pretending to be human are many - and the reach of the Galactic Empire is long! $9.95 Visit Oakley here.
Lee: Oakly is a fantastic writer! If you’ve never read ‘Thieves & Kings’ then it’s worth your time to search out back issues or trades because it’s great. And now he’s got new work, so I’m sold. Not to mention that it sounds fun.
Jim: I also recommend using Lee's links on doing a search yourself to see more about these creators and have the chance to buy their work often direct. 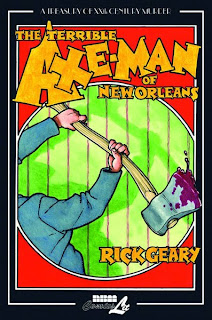 Treasury 20th Century Murder Vol. 03: Terrible Axe Man HC by (W/A) Rick Geary
New Orleans, after the First World War. The party returns to the Big Easy but someone looks to spoil it. Grocers are being murdered in the dead of night by someone grabbing their axe and hacking them right in their own cushy beds! The pattern for each murder is the same: a piece of the door is removed for entry, the axe is borrowed on the property, and the assailant aims straight for the head! Why? The man is never found for sure but speculations abound which Geary presents with his usual gusto! $15.99
Lee: I turned Jim onto these awhile ago and he loves them! Now it’s your turn. If you love true crime, it doesn’t get any better than this.
Jim: I actually hate to say it but Lee totally got me into these books. Geary stuff is a great read and so well researched from what I can tell. I recently read about the murder of Abraham Lincoln and if you think you know what happened, think again.