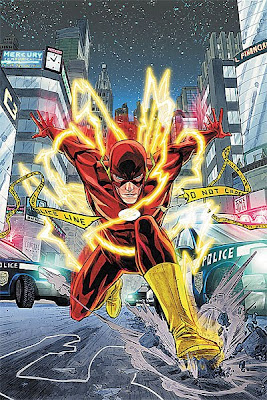 After the miserably slow Flash: Rebirth mini-series, I wasn’t very enthusiastic about the new solo Flash series, starring Barry Allen that came out this week. In fact, I was thinking about skipping the book altogether. However, I made the right choice picking it up, because it was VERY good!

You didn’t have to read Blackest Night (I haven’t – yet) and you don’t have to read Brightest Day (still on the fence about picking it up) to enjoy this issue. Other than a passing mention about Black Lanterns and dinner plans with Carter and Shiera (Hawkman and Hawkgirl), you wouldn’t even know any of that had happened. There’s not even a convoluted recap of Rebirth – it wasn’t necessary. It was a perfect way to start the series without any baggage.

Before I get into the plot, I’ve got to mention the art. Francis’s art and Brian’s colors really complement each other. The art at first seems a bit sketchy, but I think it’s really just lithely. Whatever it is, it works and while the lines are quick and thin, the darker colors really flesh out the drawings, giving them weight. You can really see this in the Flash’s uniform, where the extra burgundy makes the drawing more three-dimensional. This is a stark change from the bright primary colors of the Silver Age Flash, but again it works. (I wonder if these two always work together?) I was able to focus on some of the important little details going on in the panel without having to “try too hard” to understand what was really going on. It’s like I had already read the detailed script and knew what to look for – if that makes any sense. I guess I didn’t miss any cues and sometimes I do, because of circumstances I might read a book too fast or be too tired when I read it.

The story starts with a full-page opening shot of Central City and then zooms in on a street corner where Iris is picking up “another” Latte. The brief exchange between her and the coffee vendor reveals a lot about her and her relationship with Barry as she states “Caffeine is THIS girl’s best friend. Or at least the most reliable.” She texts Barry about the breakfast date, he seems to have missed and then he responds “Behind You” (His icon is a bow tie and hers is a coffee mug). Suddenly, the Trickster ZOOMS by hitting a parked bicycle loaded with Chinese take-out. The next panel shows the familiar Flash-zoom and lightning crackle, but it also shows the take-out neatly piled in the delivery guy’s hands and Iris’ hair flying up in his wake. Then we see Iris smiling with pride and affection while her hair is still settling down around her neck. That’s just the first three pages, folks!

Next we have the beautiful two page spread of the Flash (his first appearance in the issue) running next to the Trickster’s car. The Trickster is driving and the passenger starts shooting at the Flash and the Flash just starts catching the bullets. He then uses his super speed to punch through the top part of the semi-opened window to knock the guy out, giving him a bloody nose. The Trickster cries out from the impact, as the guy slumps beside him. The look of determination on the Flash’s face is great – I think this look is a key element to the Barry Allen Flash. The Trickster swerves up a ramp under construction and bolts through the barricade. When we see Barry, he’s already caught up to the barricade as the reflector floats by him. The vehicle is falling toward a group of contractors, including one boy who is visiting the site. The boy looks up at the scene and sees the Flash rescue the Trickster and his companion, before the Flash vibrates the entire car apart in another gorgeous two-page spread. This makes sense as the Flash doesn’t have any extra strength to stop the car and he’s not on the ground where he could whip up a whirlwind to keep it suspended in air. All of the parts miss the party, except for the steering wheel, which is headed right for the kid’s face. With inches to spare, the Flash grabs it and introduces himself (the first mention of his name in the issue).

The next five pages set up Barry’s working situation back at police headquarters. We’re introduced to his Captain, who doesn’t like that Barry is late and slow – yet still holds his abilities in the highest regard. We find out that Barry’s been in the Witness Protection program all these years (minor quibble: why wasn’t Iris with him then?). The Captain explains the current crime-state of Central City – basically, the Rogues just cause havoc for the fun of it (like the Weather Wizard raining out each home ballgame just to be a jerk). We get the inkling of a coming conflict between Barry’s slow, but deliberate search for solving cases versus the department’s politically mandated “just close the case quickly” mentality. Finally, the Captain introduces Barry to the rest of the lab department (over a dozen people):

“This is Barry Allen. He’s my Golden Boy. And he’s got more talent in his pinky than this whole room! Just needs a kick in the ass once in a while. Like every one of YOU….That oughta do it.”

“I’m sure it did” Barry responds.

Yikes! I haven’t even reached the staples yet. I gotta start wrapping this up!

We get another splash page of someone in a Mirror Master costume that just appeared out of thin air (and a blazing blue light show) in the middle of a busy street. When Barry goes to investigate, he discovers that the deceased isn’t any Mirror Master on record. There is a nice exchange between Iris and Barry at the scene. She’s apparently back to her reporter job, which is kind of hard for me to relate to as I last remember her as Bart’s grandmother back from the future (Wow! I guess that was nearly 15 years ago). The change in her expression as she recalls a deal she made with him to keep things “off the record” is priceless. When Barry gets word that another “light-show” is appearing, we get the money-shot of the issue, a full page spread of the Flash running down the street with four “after-images”, including one where he leaps over the back of a taxi cab.

There is a plume of smoke that rises from the asphalt when the Flash stops (I hope Central City has a good maintenance budget). He spots the blue light and then streaks up the side of the building to find some people dressed as the Rogues, claiming to be from the 25th century (in a one and a third page spread). They’re arresting the Flash for the murder of the Mirror Monarch. Now it makes sense that if the 25th century has the Reverse-Flash, then the good-guys from that era would take on the identity of the Rogues (Well, it makes sense to me.). Barry sends a text to Iris that he’ll be late for dinner (Another minor quibble: Where is his texting device anyway?)

Overall Grade A: A GREAT start to the series. The art is perfect at capturing all of the motion as well as the little subtle details that make it more entertaining. Another winning book for Geoff Johns.

You know how Johns likes to tease us with a preview of coming attractions for next year. Well, he does it again at the end of the issue, announcing Flashpoint to be drawn by Andy Kubert. I’ve gotta say that I really wasn’t too keen on this preview. It seemed like just a lot of baggage (multiple Flashes and big-eventitis written all over it). Oh, and it looks like Lee better buy some flood insurance for his new house. :)

While I haven’t had an opportunity to review Logan’s Run: Last Day #2, I did LOVE the issue and I wanted to let you all know that issue two is going to have a second printing (see the new cover below). Congratulations Paul and Daniel!!! 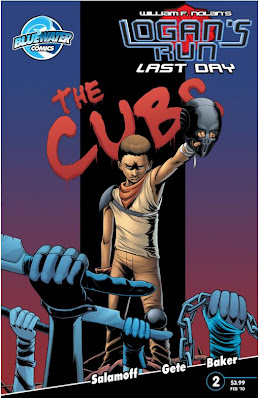