Morning Glories Vol. 2 All Will Be Free

Normally, when a book has a cover featuring sexy teenagers, I find it troubling. Troubling because the teens are being held out as sexual objects and that they should be sexual objects. Books like Dead @17 come to mind. Of course, most of the teens in those sorts of books don't behave much like teens. More often they are portrayed thinking like adults.

There's a little of that sort of adult thinking in Morning Glories Vol 2, but what separates the creepy, sexually alluring teen cover on this book from others is that I'm pretty sure that Spencer, Eisma and Esquejo intend it to be creepy. The goth eye liner on all 3 of the girls is probably some hint, and one of the girls isn't portrayed as sexy at all, but it's the content of the book that gives it away.

Where books that typically have sexy teens on the cover are going for more sex involving the teens, or at least hints of it, in the interior, these teens are much more about the seriously freaky than they are the sexy.

And this volume really delves into that. Where the first volume told a progression of what happened to our six protagonists upon their arrival at Morning Glory Academy, interspersed with some background of how they got there, this volume is about looking at five of the six individuals and spending a lot more time on the individual background. And, man, are they some messed up people. The Academy is a virtual Bedlam, but these five had a lot going on already. We don't have a look into Casey's past, but then hers was the only one we saw at any length in the first volume. 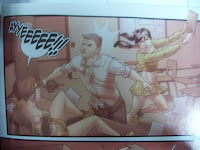 We start with Zoe, who's the front and center sexy girl on the cover. She's got quite the past. Watching her father kill her mother in their life of poverty in Mumbai, India and displaying some psychic ability that gets her adopted in the US. Then, in her previous high school she accidentally kills a teacher when she attacks him because she thinks he's raping another student, who was actually playing a sex game with him. Yeah, the good thing in this episode is that a girl isn't being raped but is instead playing sex game 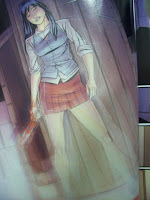 s with her teacher. It's not just the kids at the Academy who are a mess. Anyway, Zoe convinces the girl that they have to dipose of the body, so they throw the teacher in the school's incinerator. Do public high schools have incinerators? Do any? Or is it an old school coal fired boiler?

In the parts in the present, Zoe is mad at Casey for not including her in the plan to escape that failed in the last volume. She gets that out of her system by stabbing to death the head cheerleader at the Academy. Students die a lot here, so I guess no one will mind. I'm not entirely convinced it was actually Zoe doing the stabbing,. We'll see how that goes. 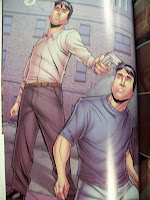 And part of the reason I'm not convinced is the Jun part of the story. Last volume we saw him attacked by someone who looked just like him as he was almost free of the Academy. This time we learn that Jun isn't actually Jun. He's his twin, Hisao. They're Japanese twins. When the Academy came to take Hisao, who had the birth order they wanted, the twins switched identities while their mother was being killed. So the actual Jun has been at the Academy for some time and now thinks he's H 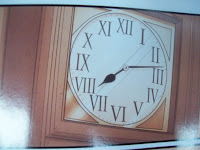 isao. He's also full on with the Academy program, whatever it is.

Of course, before that, we had Hunter's story. He's crushing on Casey in the present. Turns out he's late for everything because every time piece he looks at always appears to say 8:13 to him, no matter the actual time. But that's not what queers his date with Casey. He manages to work out the time problem, only to run into Hisao who's actually Jun but thinks he's Hisao. Nevermind. He's the bad twin. Bad twin and his 2 running buddies kidnap Hunter, put a b 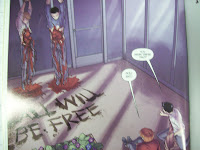 ag over his head and tie him up in a basement. During the flashbacks we learn that Hunter's 8:13 problem is organic to his brain and that the Academy wants that information kept from him, putting a gun to the head of a radiologist to ensure that happens. When good twin Jun (actually Hisao) frees Hunter, the two running buddies of bad twin Hisao (actually Jun) are strung up and eviscerated while bad twin Hisao is gone.

Jade's story is the most confusing. Not 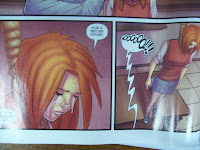 becaue of what happens in this volume. That's a fairly interesting story of how she hangs herself in a classroom but revives in the nurses office after having had a mysterious conversation at a picnic table in a field with an older version of herself. They discuss dreams she's been having and plant a suggestion in her mind that she only saw shooting stars while she was out so as to not reveal anything to the Academy. What's confusing is that in the first volume we saw Jade as an adult apparently running, or at least at a high level at, the Academy. This adult version appears to be trying to subvert the Academy. I don't know what's going on with all that. 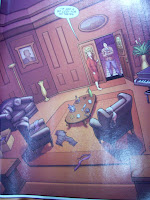 Ike is the last of the five who's story is told. He's supposed to have killed his father and generally supposed to be a bad ass. 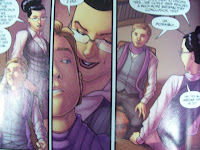 He turned in the others in last volume's attempted escape and has been rewarded with private rooms and as much sex as he wants with the girls at the school. Still, when the Academy wants him to kill in exchange for freedom from the school, he's resistant. He's killed a guy who was blackmailing him about his father's death, but the offer of freedom isn't enough. He is more willing when he's offered sex with the hot chick who's the head of the school, though. Ike's kind of simple. 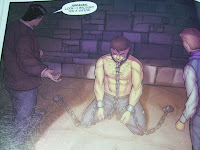 Other than these glimpses at the students who are central to the story, the volume introduces a character named Abraham who shows up at various points to help out each of the five. He also seems to be Ike's actual father and the person the Academy wants him to kill. Abraham seems to oppose the Academy, if his help of the five is any indication, but other than that he's a cypher.

The final issue introduces another new character, the Academy's guidance counselor. She was on vacation up 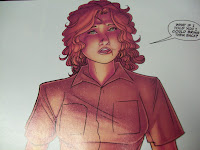 to this point. She's the sister of the sadistic school nurse (I think). She's working at the school under some sort of duress. She wants to help, particularly Casey. Her part of this volume is much lighter in tenor than the other issues, reflective of her personality, despite the situation. At the end, she offers Casey the possibility of bringing her parents back from the dead. Not sure if that ties into Jade's apparent death and return. I rather like this new character.

On the whole, this volume's not as coherent a story as the first, but then, I don't think that was the intent. It's a good read and I'm still interested in seeing where it's going to go.

Hmm, maybe I should have saved this one to next week for Halloween?
Posted by Thomm at Sunday, October 23, 2011