The Week in Review – September 28

Well the DCNu’s debut is complete. All in all I think DC did a great job and since next week I will not have the time to do a week in review post I will probably prepare a first impression and some sort of rating scale regarding all 52 books as I sampled each and every title. I have heard that Didio is micromanaging stuff and driving creators crazy and I can believe that aspect. The flip side is that he was right about a lot of the changes that were needed to get things right and he is enforcing what he believes is the right thing to do. Didio maybe was the force needed to bring DC in to a new era and eventually he may need to be the person pushed out the door also. Time will tell. Success always brings detractors and if everyone likes you then you must be doing something wrong.
I have a fair number of books to cover this week so I will be trying to keep it brief while talking about each book. I find it hard to do a proper review when just giving a brief bit to each book so they often become more about my feeling towards the series then an actual review. All in all September has been one of the most exciting month in comics in decades which offsets the never ending rain in Baltimore, Maryland area has been suffering through.

A big surprise for me is how much I enjoyed The Ultimates #2. While I love Hickman’s high concepts and ideas his execution and ability to actually tell a story often fall short or more accurately go on forever (see FF). This issue we get a tale of a science fiction city that cuts itself off from the world and inside the city time passes at a hyper-accelerated rate. In the span of minutes a futuristic people who have evolved a 1,000 years re-appears on Earth. A battle ensues with super heroes and they discover Asgard and succeed in killing off the power source and much of Asgard.  Great concepts, a very cool story, the plot moves fast, the art is enjoyable and we get an actual story. In FF Hickman’s story has been dragging on for years with no end points to the plot. Here we get a great story where we have plotline that resolves in one issue, but it is part of a greater whole. This book appears to be showing the payoff of Hickman finally marrying his great ideas into a great monthly comic.

Another surprise for me was Teen Titans #1. This was not a great issue, it was a good beginning and considering how poorly this book has been, this was a great start. A straight forward concept has Tim Drake more or less being the master planner and a combination of the old Oracle and being trained by Batman. He is attacked by a shadowy organization called N.O.W.H.E.R.E. (shades of the Man from U.N.C.L.E.) and has recognized they are gathering up super powered teen-agers. Tim as Red Robin goes to recruit Wonder Girl (who does not want to be called Wonder Girl) and we find out Superboy is being released from where he has been raised by the NOWHERE guy for some dastardly purpose I’m sure. Since Lobdell is also writing Superboy it all ties into together perfectly. The story is full of clichés and is something that has been done 100 times before and feels very much a fill in the blank plot to start a super hero group, but it was a very enjoyable read. Not high concept, just basic entertainment. It was more enjoyable as Brett Booth’s art was enhanced and brought back from his almost effeminate portrayals of characters by Norm Rapmund’s inks. Norm allowed Brett’s great layouts and design work to shine through and look great as opposed to his work elsewhere that was always off-putting to me. 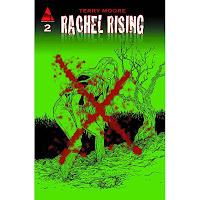 Terry Moore’s work is always quality and Rachel Rising #2 is no exception. His light line work and superior story telling abilities make his latest work look and read great. Like Echo before it, this is truly a graphic novel and each issue has to be viewed as a chapter in the story. Last issue Rachel awoke out of her grave and she has yet to realize that she is probably dead. This issue she reaches out to her Aunt Johnny, who is either a mannish lesbian or some sort of transgendered individual. What I love about Moore’s work is the characters can be all of sorts or stripes but it is just about casting different roles and not trying to force a diverse population in his book, it all flows naturally. Rachel finally forces Aunt Johnny to believe that it is really Rachel and not one of her hallucinations she gets from working at a mortuary. We then cut to a totally different scene and see a young girl apparently possessed or something kills her older sister with plastic wrap and frying pan. A great story and cliff hanger has you waiting for issue #3.

Justice League Dark #1 was fun and different. The entire group is essential flawed and/or drug addled psychopaths with magical powers who have to fight off a deranged Enchantress whose power levels seem insurmountable. In one issue Peter Milligan manages to introduce Madam Xanadu, June Moon, Shade the Changing Man, Enchantress, Zatanna, John Constantine and Deadman. Most books can barely introduce two cast members and take six issues just to get the group together, here the entire cast is already front and center and the menace that will band them together has been set. I have never heard of Mikel Janin before but his art was very good. This series could be a very good one from DC.

Captain America and Bucky #622 continues the string of excellence. Brubaker and Andreyko as writers are really doing a great job of showing us the making of a character. From the first issue of his coming into his own, to learning how to kill in issue #2 and coming into his own when surrounded by super powered people in this issue. All of this is “known” history but each issue we are seeing deeper and deeper into the character of Bucky Barnes, which makes me believe he can’t be dead. Chris Samnee as the artist is making this book a total gem and a beautiful package. His masterful storytelling ability puts him in rarified company as one of the best in a business full of talented story tellers. I’m not sure if he works from a full script or not, but from The Mighty to his Thor book to this work, his is a name I look forward to seeing on a comic.

Last and far from least to make the column this week is I, Vampire #1. I hate the cover but the interior art had a wonderful moody feel to it that is reminiscent of Jae Lee. The muted tones and sometimes heavy handed coloring may have covered some artistic flaws but I loved the feeling and vibe this book gave off. It was every bit a Vertigo book about a fight between Andrew and Mary, who have been Vampire lovers for hundreds of years. Mary wants to conqueror the Earth and Andrew is a vampire hunter. The story telling was not 100% clear, but the book actually worked in projecting a mood and feeling. This is essentially a Vertigo book, just set in the DCU. It also has Joshua Hale Fialkov as the writer, who is a fresh voice for the DCU. This is a book that could be the sleeper hit from DC.
That puts a fork in this week and like I said next week’s post will be something different. My list for this week is Avengers 1959, Hulk, Moon Knight, X-Men Schism, Chew, Invincible, Last of the Greats, Severed, Spawn, Strange Talent of Luther Strode, Walking Dead, Fear Agent, Mighty Sampson, Turok, Caligula, Warlord of Mars Dejah Thoris, Action, Animal Man, Batwing, Detective, Green Arrow, Hawk and Dove, House of Mystery, Huntress, Izombie, JLI, Men of War, OMCA, Penquin, Red Lanterns, Stormwatch, Swamp Thing and Sweet Tooth. This is almost a small list after the last few weeks.
Tune in next week and be back in two weeks for the regular show.
Posted by Jim at Monday, October 03, 2011