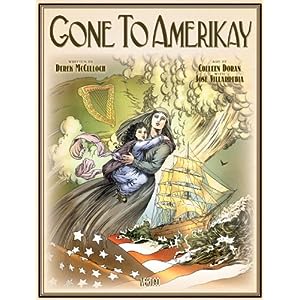 I remembered the ads for this Vertigo book when it came out, so when I saw it on sale at half off, I snapped it up.  Immigrant tales are always entertaining, if told well, and being Vertigo there was a better than average chance of it being told well.

And it is.  Looking at the cover you might think it's the standard story of a 19th century immigrant to America.  The harp is something of a giveaway that it's an Irish immigrant.  That story is there, but Derek McCulloch, Colleen Doran, and Jose Villarrubia present a bit of a twist.  In fact there's a little bit of the three different eras track that's currently being employed in Thor, though none of the characters in the three tracks here interact with one another, with the exception of one brief encounter.

The book follows a young woman who's an Irish immigrant to New York in 1870, a young man from Ireland who's in New York to become an actor and musician in 1960, and a wealthy Irish entertainment executive coming to New York in 2010 for business but also for his girlfriend/assistant to show him the story of one of his favorite songs and entertainers.  The executive is a big fan of the 1960 entertainer, who in turn wrote a famous song about the young woman from 1870.

There's really not much developed about the executive, other than that he's a fan of the entertainer and being given something of a gift by his assistant who tracked down information and locations to show him.  He's a cypher when it comes to personality, though he seems like a nice guy, at least superficially.  The real stories are of the young woman in 1870 and the entertainer in 1960.

The young woman came with her small daughter in the expectation that her husband would soon be joining them.  He had to stay behind in Ireland at the last minute in order to support an uncle who was accused of killing a British soldier.  She survives by doing laundry and has a brief stint as a maid in a wealthy fence's household, though that ends because she's too pretty and draws an attack by one of the rakes who frequent the place.  Ah, the days before sexual harrassment laws, when the victim got canned for the trouble caused by her attacker.  Oh, wait, you can still get canned for being too pretty if your employer thinks he might have trouble controlling himself.

Anyway, the husband never arrives in New York, though he was on his way.  Lies and cheating bring her into a relationship with a man who's on the lam from a mob boss, pretty much all the time.   That man ends up with his just desserts in time.  Our heroine winds up with his hidden wealth and some additional gratitude from the mob boss.

The concurrently told story of the entertainer in 1960 shows how he tries his hand at stage and song, has his heart broken in a relationship with a man who's sexually voracious, and who also steals credit for his songwriting.  In the midst of his despair over the double heartbreak there, he sees a ghost who tells him the story of our 1870 heroine and her husband.  This story becomes a new song that is very popular in its day, and is the song that is so important to the 2010 executive.  The ghost's story also leads the entertainer to find the ghost's daughter to let her know what really happened to her father, rather than the lie that was told to her and her mother.

It's a nice device that ties these three time lines together without any of the characters in each time ever interacting with any of the characters in the others, other than the brief meeting of the entertainer and the elderly woman who was a little girl in 1870.  There's a somewhat unnecessary touch when the girlfriend tells the executive how descendants of the victim of a muder and descendants of the murderer end up marrying, but it's such a small part of the story, taking only a few panels near the end, that it's not any real detriment to the story.  By far the 1870 and 1960 stories are the more engaging, but that's to be expected because the 2010 story is more or less passively relating those two stories and how they tie together rather than being a story unto itself.

Doran's art is lovely and evokes the times for each era in the story.  With Villarrubia's colors the poverty of the Irish neighborhoods in New York is stark.  With the excitement of the entertainment scene in New York in 1960 there's an exuberance.  In 2010 there's a wealth quite evident.  To a large extent this was one where the art drew me to the book and the story held up its end, rather than me following a writer.  As J Michael Straczynski said in his cover blurb, the story is both large in scope and intimate in details.  It develops the lives of its protagonists as well as showing eras, particularly in the 1870 and 1960 lines.  Take a little time and enjoy this one.
Posted by Thomm at Friday, March 22, 2013