Wow, this week really has gotten away from me.  My plans on getting my stuff ready for the 2018 Baltimore Comic-Con (#bcc2018) next weekend epicly (why is this not a word?) failed yesterday.  However, we've got all my daughter's supplies and she's working on fanart to sell.  (See some examples on her FB page.)  So feel free to come by the Who's Mannz  Artist Alley table (A-135) to look at (and hopefully buy) her wares or talk to me about comics.  We got her some business cards and I thought about getting one for myself as a Comics And blogger. : )  We'll be there all three days, Sept 28-30 and Lord willing I'll have an interim update next Saturday just before our next blogger's post on Sunday morning.

Now in case you haven't noticed, something about the blog page is broken (or at least when I look at it).  Gone is the search field and the listing of posts by year.  However, there is a workaround.  If you go to an old post where those fields are still shown, then obviously you can still use them.  So, I'm putting this link here of a post from 2013, which is good background to the upcoming Superior Octopus series coming out.

Enough of this preamble stuff (consider it my warm-up exercise), let talk about the World's Greatest Comic Magazine PRESENTATION:  The Fantastic Four: Behold...Galactus! Over-sized Hardcover (OHC).  In this instance "World's Greatest" is not hyperbole. It. is. simply. beyond. belief.  It's AWESOME to the highest degree (no pun intended) and gives you a never-before-EVER uncanny reading experience like no other.  It's so good that I bought two more copies and had them shipped to friends as surprise gifts. (I wish I could've bought even more.)  This was helped by the outrageously inexpensive price  -- $25 the first week  (50% off) at www.instocktrades.com and afterwards about $29 (40%).  Unfortunately, I think it is already sold out there, but if you can get it for the $50 cover price it is still more than worth it.  $100 wouldn't be too much either. [Just checked - only $38 on amazon.]  The concept is simple: Let's reprint some of the best Galactus stories at a Galactus size.  And Galactus-size it is, the book is nearly two-feet tall!  Bigger than any Omnibus, Treasury Edition, and Artist Edition I've seen. 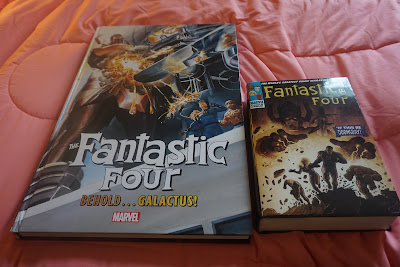 I had my eye on this book from its first announcement in Previews.  I knew it was going to be great, but I couldn't conceive of the unexpected ways. Find out more after the break:


I fell into the art.  The best way to describe it is the way Mark fell into Hoodoo's hat at the beginning of Lidsvlle (see video below):

It's just so immersive.  The bird's eye perspective of some panels is almost dizzying.  The detail is  amazing too. I'm fairly certain that these pages are larger than the size of the original art, but they don't seem stretched at all.  While it didn't impact the flow of the story, I found myself just gazing at the panels, soaking it all in much like you would do at a museum gallery.  Contrast that with my regular reading experience these days, where even with reading glasses the text often obscures the art, so it's more like glancing out the window of a moving car.

It's like watching a movie in IMAX, everything is better even the sound!  Honestly, I usually skim over the sound effects in comics with rare exceptions, but here you can't ignore them.

The construction of the book is solid, the binding is sewn, and it weighs almost 12 pounds.  The cover is an image from Marvels, the groundbreaking mini-series from Kurt Busiek and Alex Ross.  I've visited a gallery of Ross's work and his originals are much smaller than you would think, so it's impressive to see this image so large.  I plan to include some comparison pictures later on.  (My copy did have a slight bulge in the lower spine crack, but it seemed like a minor manufacturing flaw and wasn't worth complaining about and it didn't hinder my enjoyment.)

I thought of several funny comic strips that could show the issues (again no pun intended) you may encounter while reading this book.  If you read it in bed, it can be like being on the front row of a movie theater or drive-in.  If you place it at upper chest level, then the image is going to be all out of whack.  And while I can read this without reading glasses, in that prone position I'd need my progressive lenses to have the top be in focus!  Also, if you fell asleep, you just might decapitate yourself if it fell on your head.  And don't even think about lazily reaching for it with one arm from the bookcase, you might end up in physical therapy.  You could sit it at the dinner table and give it something to eat or create a temple shrine in your house and offer it sugar wafers daily.  (I wish I had had the time and skill to execute some of these ideas.)  All kidding aside, I think the best way to read this is looking down, with the book spread onto the bed or at a podium or pulpit.  "Please rise as we read from Fantastic Four #48..."

I guess I haven't really discussed what stories are covered in this tome yet, did I?  It collects Fantastic Four #48-50, #74-77, #120-123, and #242-244.  The first two are Lee/Kirby classics.  And I know its popular to downplay Stan's role in things these days, but the dialogue is where most of the characterization comes through.  The brilliant art and words complement each other perfectly.

The third story is good, but John Buscema's art seems a bit empty in comparison to Kirby's.  Worst is the "getting-his-hands-dirty" portrayal of Galactus where he is throwing stuff around like some monster.  It's written by Lee too and the captions spread out too far, meaning what would take you two minutes to read or say in real life covers a lot more time in the images.  And it would be much easier to spot No-Prize-worthy errors at this size.  At the end of #122, Reed has commandeered Galactus' ship in a spacesuit, but at the beginning of #123 he's just in his costume again and it's the continuance of the same scene!  The best part is the renderings of Silver Surfer and the set-up with Gabriel, the Air-Walker.

The fourth story is the classic John Byrne tale, where Reed saves Galactus' life and includes an epic battle between Ben and Terrax. #242 is a special issue for me, which I recounted about in this archived post from years ago that features a great Fred Hembeck cover-redo. I haven't started rereading these yet, but they look, well... Fantastic!

Now for some pictures... 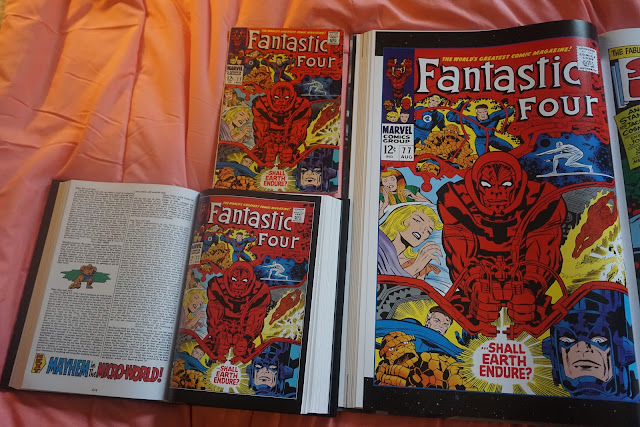 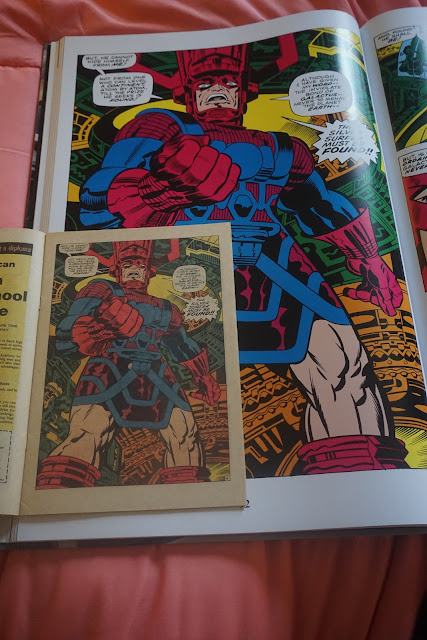 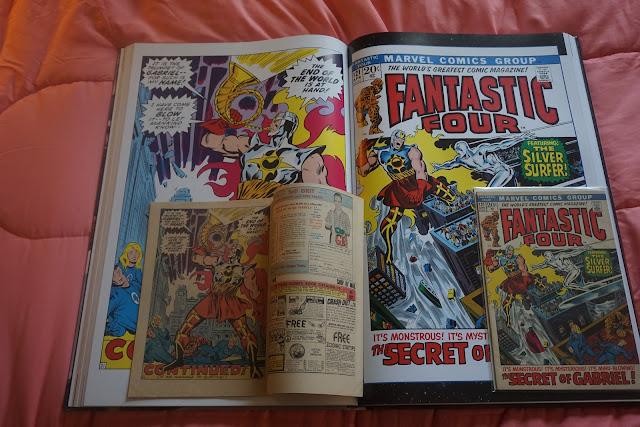 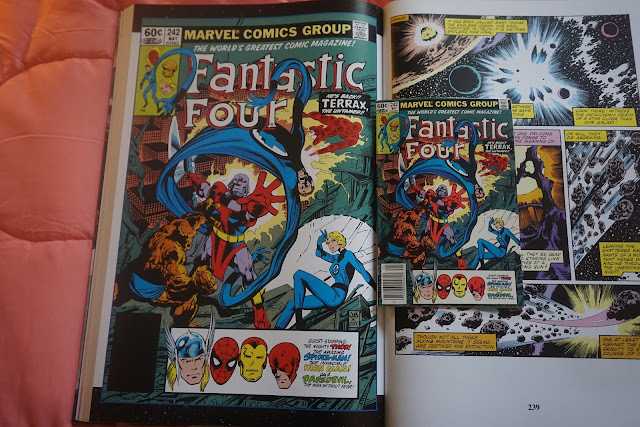 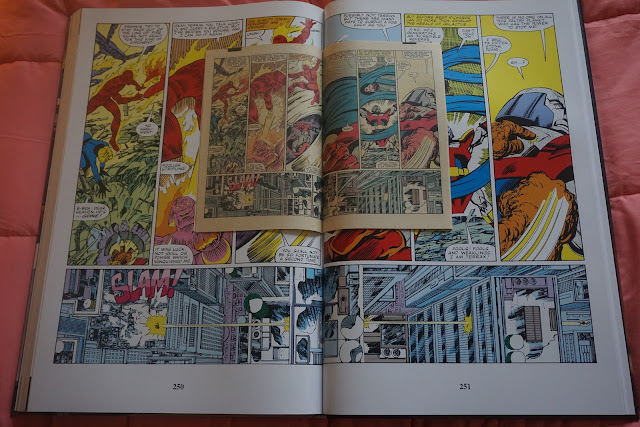 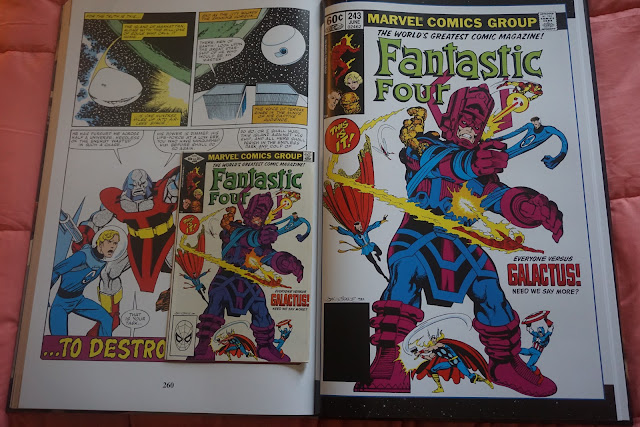 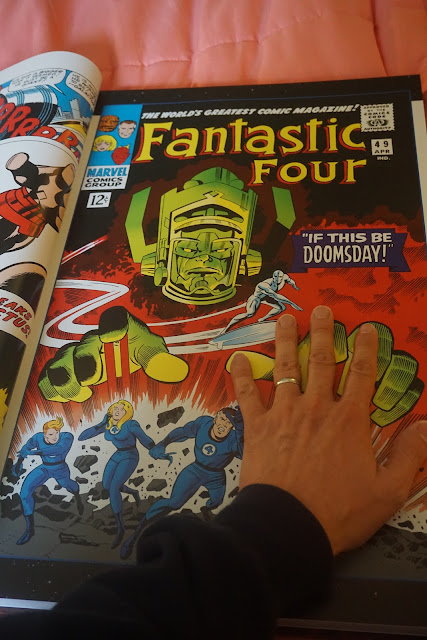 I really hope Marvel decides to reprint their Godzilla series at this size!!!