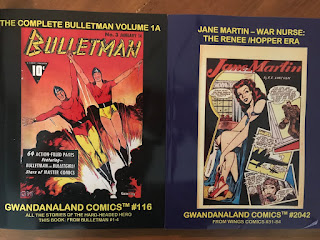 So I started drawing a blank for what I wanted to talk about this week. Lately I have been immersed in Gwandanaland Comics. They are a small company who specializes in reprinting material that is in the public domain. I have included a few pictures of the collections that I have ordered. I have sent two collections onto fellow contributor Lee for his enjoyment after I read them.

As this is all public domain material so anyone can essentially work with the material. Many companies have in fact obtain copies of the material and cleaned up the pages and published them as hard cover collections. Often recoloring the books.  While a great way to enjoy these comics it also takes away from the book having that feel of being the actual comic. Especially the coloring as it is way better in many collections, which is both a good thing and is like colorization of old black and white films is a bad thing. Something is lost and gained at the same time. 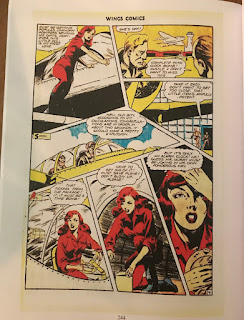 This format has the feel of almost sitting down and reading the comic itself. Every page is not always crystal clear, but it has been great fun for me to read books and material I have never heard of before and no one else would ever have collected this material. Even better they can create almost any collection that you want within limits. Take the Jane Martin War Nurse collection. I was not interested in all of it, I was more interested later in the series as the art and stories got better. I learned at that point that two different female artists worked on the series. I have also learned some female writers did comics but used a male name for purposes of publication.  It becomes a history lesson as well as entertainment.

Often when possible the collections will include the ads from the comics. The ads from the 40’s and 50’s are almost as entertaining as the comic themselves.  Dated to be sure, but also a reflection of the way society viewed itself at that time. 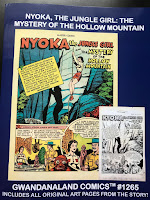 What was very cool is that they produced an artist edition version on Nyoka the Jungle Girl. I own the art for the full seven pages and found a local person who was able to produce high quality scans of the pages. I sent the scans to Gwandanland Comics and they produced a book with the color pages and the original art plus some extras to make the book big enough to publish. 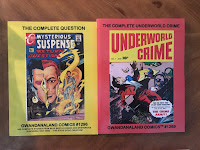 Lance is the central contact point and he is cordial friendly and very helpful in explaining options. You can buy the books on Amazon or pay them direct – cheaper but slower mailing time. They only produce books when ordered as they have a huge catalog to choose from and are constantly adding material. Recently they had to delete material as they found some material that appeared to be public domain was in fact copyrighted.  I asked about how they could publish all the Charlton material they publish when DC had purchased Charlton characters. I was told Charlton published their material without a copyright. While the characters are owned by DC the Charlton material is public domain. 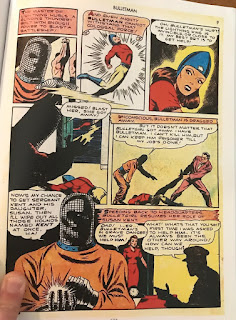 There is such a wide variety of material. Some is dated and some of the writing and art are weak, but there is also an amazing amount of beautiful art and fascinating stories. A lot is pure fun and enjoyment. It gets crazy at time as before the comic code the companies were pushing the envelope. Gwandanaland has a series of collections call Wertham’s Weapons that publish most of the comics that were referenced in the infamous Seduction of the Innocent.

The material here has captured most of my reading time at this point. It has the plus of telling complete stories often in eight pages. You can easily see how it might be expanded into 20 pages or more but I sometimes enjoy not having every comic book story I read be a Homeric epic.