Lee: As always a great month ahead. It’s another mixed bag with a surprise or two from established talents, a revival of an old property, and the usual flurry of kid friendly books towards the end.
Gwen: I may not be around for next month's indie preview review, but don't worry, it'll only be for one month!

215 Ink
Vic Boone #1 by (W) Shawn Aldridge (A) Geoffo (C) David Lloyd
Former motorcycle dardevil, Vic Boone is hired to clear a woman's name after she's blamed for a series of grizzly murders. To find the real killer, he'll have to beat robot thugs, get help from a human fly, and escape the all powerful (not really) Raygun Radicals. $2.99 See some previews here, some more previews here, and visit Geoffo French website here.
Lee: I am not sure why this looks like so much fun but it really does. Actually, it's all based on the art. The crazy coloring in the previews and in some vague way the art seems to be influenced by Darwyn Cook so I am sold.
Gwen: I just like the drastic career switch here. How exactly does one go from motorcycle daredevil to crime fighter? I mean I guess Johnny Blaze made the jump (sort of). Either way, this does look like it could be a fun book. 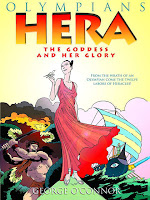 :01 First Second
Olympians Vol. 03: The Hera Goddess and Her Glory GN by (W/A) George O'Connor
This is the third book in the Olympians series, a set of books about the Greek Gods for young readers. This book tells the story of Hera, Queen of the Gods, and the many heroes who won her patronage - and her enmity. 80 pgs, $9.99 Visit the official site here.
Lee: My kids recently got into all the Greek myths and this could be an excellent way to fuel their interest. This is volume 3, but the others look just as good.
Gwen: This looks excellent - but I have to say, a lot of the Greek God mythology is really not kid friendly. I mean it'd be pretty hard to make a kid friendly version of most of the Zeus myths. I really like the look of the art too :)

AAM Markosia
Hope Fall SC (Ultimate edition) by (W) Tony Lee (A) Dan Boultwood
Twenty years ago they murdered her - and now she's back to even the score, as Helen, a falling Angel returns to the town she died in to extract revenge on the four men who killed her - while discovering an Angelic conspiracy that dates back to Jesus Christ. Will God allow her to gain vengeance? Or is the Angel Michael right about her true purpose? Hope Falls: The Ultimate Edition collects the Eagle Award-nominated five-part series by New York Times Best-Selling List author, Tony Lee, and his MTV Comics collaborator Dan Boultwood, in a brand new format 128 pgs, $17.99 There is a 7 page preview here, just follow the link on the page. Also, the official site is here.
Lee: This is an interesting little book. It claims to be a master piece, eagle nominated no less, has great blurbs on the cover, but I can’t find a single review of it online. Maybe some reviews are out there but I can’t find them without a more complex search. No matter, this is one of the rare times the cover blurbs have sold me. The art looks good and Tony Lee, even if he is a grouch, is a pretty good writer.
Gwen: This looks like an interesting concept although it is odd that it's hard to find any reviews. I'll have to wait and see what Lee thinks about it since he's already been sold.

Adhouse Books
Welcome to Oddville HC by (W/A) Jay Stephens
Welcome to Oddville!, the complete collection of newspaper comic strips by award-winning cartoonist Jay Stephens, best known for his animated TV series Tutenstein and The Secret Saturdays. Join 8 year old superkid JetCat on her misadventures throughout the weirdest city since Oz! Oddville! is chock-full of strange and wonderful denizens, including a ghost pumpkin, a rude snail, a discarded bandage, and a gang of talking apples - all in spectacular full-color! 88 pgs, $14.95 Visit Jay Stephens here and read all about Oddville-Jetcat.
Lee: OOOOHHHH (squeals like a slightly older version of Gwen) this is great !!!! My kids destroyed my copies of Oddville long. Actually it might have been Jetcat Clubhouse but whatever it was, it was great. Just an excellent, excellent book.
Gwen: Hey! I don't squeal... much....

Airship Entertainment
Girl Genius Vol. 10: Agatha H & Guardian Muse SC by (W) Phil & Kaja Foglio (A/C) Phil Foglio
Adventure! Romance! Mad Science! Deep in the heart of the damaged machine that is Castle Heterodyne, Agatha discovers her mother's long-abandoned secret laboratory. But waiting inside is a relentless guardian that is not what it seems! Other surprises as well await you within Book Ten of the Hugo Award-winning series! 144 pgs, $22.95 Visit the site here, and read the comic online here.
Lee: Girl Genius has been quietly published for several years now. I read it for awhile, then stopped. Not because of quality but because of an overwhelming mass of other books. A great series that is worth checking out.
Gwen: This does look like a really cool series. I especially like what I've seen of the art.

Antarctic Press
Diary of a Zombie Kid SC by (W) Fred Perry (A) David Hutchison
Middle school is horrific enough for any 5th grader's first day. But for Bill Dookes, it's a festering, rotting, undead nightmare. Since Bill's deadbeat dad got arrested trying to burn the house down for the insurance, Mom's had to make ends meet by volunteering to various medical research companies for cash. This would be fine if she hadn't brought home a mysterious zombie virus! Now Bill has to deal with skin problems and body chemistry changes that make puberty look like a walk in the park! And then there's his ever-growing appetite for BRAINS! 128 pgs, $14.95
Lee: This is just too good to pass up. My kids tore through the Wimpy Kid books and loved them. I am all for a zombie version of them.
Gwen: I don't know - I have problems with zombie versions of already written stories. Is this just a spoof? Or is it like Pride and Prejudice and Zombies? Because that was just an atrocity. So if it's a spoof it could be cute but I'm not familiar enough with the source material to be able to tell.

Old City Blues HC by (W/A) Giannis Milonogiannis
Built on the ruins of the country once known as Greece, New Athens of the year 2048 is a city crawling with life. Low-life, that is. From mech smugglers and drug dealers, to corrupt politicians and all-too-powerful corporations, the city is at the mercy of high-tech criminals. And it's up to Solano, Thermidor, and the rest of the New Athens Special Police to keep the city in order. When the cybernetically augmented founder of a tech corporation called Hayashi is found murdered, it seems to be just another case of cyborg persecution. But Hayashi Corporation's strange response to the incident raises suspicion in Solano and the Special Police. $14.95 Visit the artist here, and read issue #1 here, and issue #2 here.
Lee: A story set in Greece, you don’t get many of those these days. The story sounds good and the art, while obviously influenced by manga, is nice to look at. This is certainly worth investigating.
Gwen: Considering the set up for the city I'm not sure how much of this would actually have anything to do with the story being set in Greece. But if it is pulling in actual Greek culture (even if it's futuristic) I'd be interested.

Boom! Studios - Kids
Happiness is a Warm Blanket Charlie Brown HC by (W/A) Charles Schulz, Stephan Pastis, & Craig Schulz (A) Bob Scott, Vicki Scott, & Ron Zorman
For the first time ever, Charles Schulz's world-renowned comic strip, Peanuts, takes the stage as a graphic novel! Adapted from the new animated special, this timeless retelling takes us back to the neighborhood and features Linus's insecurities, Charlie Brown's kite-flying woes, Lucy's unrequited love for Schroeder, and everyone's favorite beagle, Snoopy, in a lively and colorful spin through Charles Schulz's imagination. Happiness is a Warm Blanket, Charlie Brown is certain to please old and new fans alike! $19.99
Lee: And so Peanuts continues sans Schulz. This should be very, very interesting. As a Peanuts purist, Snoopy looks a little off, but other than that I will be checking it out. I am far to curious to see what they do with the characters to skip it.
Gwen: I never understood the appeal of Peanuts. I was more of a Calvin and Hobbes kid myself. Of course I also really wanted my own talking stuffed tiger.
Posted by Lee at Monday, April 25, 2011