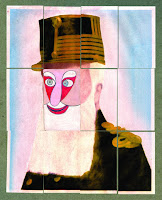 Fantagraphics Books
Man Who Grew His Beard GN by (W/A) Olivier Schrauwen
Olivier Schrauwen has staked a reputation over the last decade as one of Europe's most talented storytellers. This, his first American book, combines seven head spinning short stories which mix influences like Winsor McCay with subversively surreal humor and subtle criticism of twentieth century tropes and images. $19.99 Visit the artist here ollieschrauwen.blogspot.com/ and read his lambiek here.
Lee: The influence of Winsor McCay is soooo evident it’s incredible. And I love every single line. This should be a visual treat and not to be missed by art fans.
Gwen: Not really looking to be something I'd like to delve into but I'm not as much of an art person as Lee. I like my art to be soothing, not jarring, but it certainly would be interesting to a lot of the people I took art classes with in college. 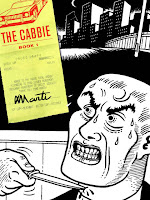 The Cabbie Vol. 01 HC by (W/A) Marti
Introduction by Art Spiegelman Spanish cartoonist Marti incorporates elements of Scorsese's Taxi Driver with the brutal squashed perspectives of Chester Gould's Dick Tracy to create an eye-popping tale of urban justice as meted by the Cabbie. This graphic novel revives the Cabbie character who was most recently seen in Marti's debut solo comic Calvario Hills. $19.99 Read Marti’s lambiek here.
Lee: The art appears to be Dick Tracy, but the story appears to be Ennis Punisher…. Yep, I am sold. Fantagraphics has really been putting out some great foreign material lately and hasn’t missed yet. I can’t wait to read this.
Gwen: Actually the concept here is looks to be highly entertaining. Lee will have to let me know how it is. Great character expressions from what I can see.

Graphix
Sidekicks GN by (W/A) Dan Santat
Captain Amazing, superhero and savior of Metro City, is getting old. He's out all hours battling arch-villains, catching thieves, and helping little old ladies cross the street. He doesn't even have time for his house full of pets. He needs a sidekick! Captain Amazing's four pets agree. But each one of them thinks he should get the sidekick spot - and a chance for one-on-one time with the Captain. Get ready for sibling rivalry royale as pets with superpowers duke it out for the one thing they all want - a super family. $12.99 Visit Dan here. See previews here. But, best part… buy a book and get free art here! Now that is just awesome.
Lee: It’s got a hamster in a Captain America outfit, need I say more? I don’t but I will. This looks just great. Fun, humorous, and best of all spectacular art. And, on top of that, a pre-order gets you free art. This is the best deal I have seen in a long, long time.
Gwen: YES! Super pets in a different setting/world!!! AWESOME. As someone who has yet to get tired of Ace the Bathound and Comet the super-horse this book appeals to me at a giddiness-inducing level :) Of course I grew up reading the Bunicula books and the Legion of Superheroes early comics so I may be predisposed. 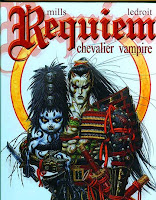 Heavy Metal Magazine
Requiem Vol. 03: Queen of Dead Souls HC by (W) Pat Mills (A) Olivier Ledroit
After death the world of Resurrection awaits human souls. In Resurrection, the elite and the most depraved are reborn as vampires. One such vampire, a German soldier killed during World War II is Heinrich Augsburg, and he must discover for himself his new existence as a vampire in the afterlife. This volume collects chapters seven through nine of the acclaimed vampire epic, originally published in the pages of Heavy Metal. 112 pgs, oversized, $19.95 A brief bio with some art here.
Lee: I am all over this too! Pat Mills has been writing good stories forever so no need to worry about that. And Ledroit’s art looks just fantastic. And, coming from Heavy Metal I am sure it’s got all sort of adulty stuff in it. Not for the meek, that’s for sure.
Gwen: Of late I must classify myself in the "meek" category as far as this type of book goes. I am burnt out on dark adulty stuff at the moment although I'm sure after a break I'll be able to have fun with this genre again.

Humanoids Inc
Bombyce Network GN by (W) Corbeyran, Cecil (A) Cecil
A twisted tale of intrigue set amid early 20th-century France, a time know as the Beautiful Era, but where the emerging technologies and high fashion only serve as cover to the most sordid of deeds. Written and drawn by prolific European stars Corbeyran and Cecil. Highly recommended for fans of Criminal and From Hell. $19.95
Lee: I loves me some Humanoids. This isn't for the meek and most places are giving it the mature label. No doubt this will be good but it will be adult in nature. Historical noir, plenty of violence and adult content... this is gonna be good.
Gwen: Of course intrigue in 20th century France may get me out of my meek slump...

Image Comics
50 Girls 50 #1 by (W) Frank Cho & Doug Murray (A) Axel Medellin (C) Frank Cho
Hot on the heels of his blockbuster New Ultimates run, Frank Cho teams with Co-writer Doug Murray (The Nam) and artist Axel Medellin (Elephantmen) to unleash a new universe-spanning sci-fi epic! Join in the fantastic voyage of the Space Vessel ESS Savannah and her beautiful crew as they fight their way from hostile aliens and exotic worlds, searching for the wormhole that will take them to their ultimate destination: Home. #1 of 4, $2.99
Lee: STOP, this is a complete rewrite of what I started to say! At first, I was somewhat excited because, beyond the obvious titilation factor, it sounds like a good sci-fi adventure. Solid writer, artist who appears to know what he's doing. Good stuff right? Until I did some research and find out that Medellin won a talent contest to draw the book. Good for him! Everyone deserves a chance. Then I saw he won the contest in 2009. Seriously, 2009! That's isn't a comment on Medellin's ability but more a slam to Cho's perpetual lateness with everything. We will never see all 4 issues so waste your... I mean spend your money wisely when it comes to this book.
Gwen: Ah hot chicks fighting hostile aliens and discovering exotic worlds - I see how this originally appealed to Lee ;)

Image Comics
Graveyard of Empires #1 by (W) Mark Sable (A/C) Paul Azaceta
Afghanistan. Marines face a never-ending onslaught of Taliban. But even hell can get worse. The dead are coming back to life in The Graveyard of Empires, and only together can both sides of the today's conflict survive tomorrow's undead assault. Writer Mark Sable (Unthinkable, Two-Face Year One) reunites with his Grounded co-creator, Paul Azaceta (Amazing Spider-Man) to tell this controversial tale of terror. 32 Full Pages of Story! #1 of 4, $3.99 Visit Paul here. lazypalooza.blogspot.com
Lee: Marines, Afghanistan, and the walking dead! This will be great. It doesn’t hurt that the art is by Paul “Potter’s Field w/ Mark Waid” Azaceta is a great artist. I’m sold.
Gwen: Excellent art. I find the idea of countries at war having to unite to fight zombies to be pretty funny. I mean, who'd ever think all we need for world peace is the walking dead!

Sam & Twitch Complete Collection Vol. 01 HC by (W) Brian Michael Bendis (A) Angel Medina, Alberto Ponticelli, Jonathan Glapion &Jamie Tolagson (C) Ashley Wood
The Spawn Universe's favorite detectives come at you full-force in their own groundbreaking series. Featuring an all-star cast of creators, the bar was set high for gritty crime fiction when Sam and Twitch first came on the scene. Follow the exploits of NYPD's two most dedicated public servants as they try to uncover the secrets behind the Central Park Witchcraft murders and also solve the mystery of Udaku. Collected in an all-new size and format, Sam And Twitch: The Complete Collection, Vol. 1 brings you the art and stories that made this series a classic. Extra features include a cover gallery and behind-the-scenes art. Collects Sam and Twitch #1-13, 320 pgs, $29.99
Lee: AUUUGGHHHH I hate when they do this! I just broke down last year and got the trades of this material and now they are releasing a hc. Ohhhh fart. Now I will have to spend the money twice to get the same material. A great story and well worth the investment.
Gwen: I never really got into the whole Spawn and it's spin-offs thing. Not that the art wasn't shiny but for whatever reason it never really clicked with me - although I've known plenty of fans who loved this stuff.
Posted by Lee at Wednesday, April 27, 2011